Missouri, the battleground state that has accurately picked the presidential winner in every election since the 1950s, now faces an unprecedented peril this week: the theft of the voting rights of at least 240,000 of its citizens (nuns included) and the sure loss of the swing state of Missouri to Republicans in the Presidential race in November. And If Obama, the presumptive nominee of the Democratic Party loses Missouri, he will likely lose the fall election as well.

Unfortunately, the wily "Thor" Hearne, the St. Louis-based voter-fraud propagandist and Republican lawyer who has been the leading GOP operative promoting vote suppression since 2000, has been working closely with the key Republican legislator promoting a new constitutional amendment requiring photo ID. Republicans are rushing to pass the measure before adjournment this Friday and bring it to voters in August, in time to stop enough blacks, the poor, the elderly, students and the disabled from voting Democratic in November.

As John Hickey, the executive director of the advocacy group ProVote, told me, "If you exclude 240,000 people from the electorate, that is plenty to swing the election in Missouri," with state-wide races having razor-thin victory margins as little as 21,000.

State activists and election reformers have been seeking to get the broader progressive community in Missouri to contact their state senators, as I described in my previous article looking at the rollback of both the right to vote and register in Missouri and Arizona. As the Brad Blog puts it in an urgent alert to readers: "TAKE ACTION: Thor Hearne and MO GOP Attempt to Rewrite Constitution to Allow Voter Disenfranchisement."

Brad Friedman, with rhetoric that matches the urgency of the fair election crisis in the state, reports:

The Senate session goes on hiatus as of this Friday, so the question is whether the Dem majority can hold off the effort to disenfranchise some 240,000 state voters, according to the MO SoS, who could be affected by this cynical attempt at stealing November. Failure to fight off the effort could result in the Show-Me state, a crucial swing state, in going to the Republicans this November simply by virtue of voters turned away for lack of specific types of Photo ID in the City of St. Louis alone.

An urgent call has been put out for MO residents to call their Senators immediately and urge them to vote against HJR 48, Thor's latest move, the Constitutional amendment to require incredibly draconian proof of citizenship and state residency with Photo ID before you're allowed to cast your legal ballot!

So for those in Missouri, please take action NOW to fight for your democracy and Constitutional rights! Call your Senators, and pass this one! Here are some helpful tools for you, courtesy of PDA...

Here are the legislative contact links pulled together by the Progressive Democrats of America:

The devastating personal impact of denying people the right to vote because they can't get hard-to-get photo ID and birth certificates is best illustrated by a heart-breaking story I reported earlier in the week . I spoke to 97-year-old Shirley Preiss about her efforts to vote in Arizona after having voted for every Democratic Presidential candidate since FDR in 1932. I quote an ACORN organizer about the use of immigrant-bashing as a lever to block American citizens from voting, then I went on to tell Shirley's story. It bears repeating, because what happened to Shirley could happen to every poor person, disabled person, elderly person and minority who doesn't have the ready access to the funds, time and ability to navigate bureaucratic hurdles to obtain government-issued embossed birth certificates and other ID:

"All the discourse here is about immigration," Arizona ACORN organizer Monica Sandschafer observes. "But we're really talking about Arizonans who are Americans and whose legal right to vote is being denied. And while Latino citizens are hit hard, we're finding that all Arizonans are at risk of being disenfranchised by this requirement."

Perhaps no one knows that as well as 97-year-old Shirley Freeda Preiss. She was born at home in Clinton, Kentucky in 1910, before women had the right to vote, and never had a birth certificate. Shirley has voted in every presidential election since FDR first ran in 1932, and proudly describes herself as a "died-in-the-wool Democrat." After living in Arizona for two years, she was eagerly looking forward to casting her ballot in the February primary for the first major woman candidate for President, Hillary Clinton. But lacking a birth certificate or even elementary school records to prove she's a native-born American citizen, the state of Arizona's bureaucrats determined that this former school-teacher who taught generations of Americans shouldn't be allowed to vote.

"I have a constitutional right to vote, don't I?" she asks with her soft Southern drawl. "I didn't get to vote because of a birth certificate. What am I going to do now?"

Her strong-willed 78-year-old son, Nathan "Joey" Nemnich, a World War II veteran, is infuriated. "I'm pissed. She's an American citizen who worked her whole life and I want her to vote," he says. He went down to the local Motor Vehicle Division to get her an Arizona ID and register her to vote, armed with copies of his mother's three drivers' licenses from her previous home in Texas, along with copies of her Social Security and Medicare cards. All that wasn't good enough for the state of Arizona. "The sons of bitches are taking away our Constitution," Nemnich says.

In Arizona and now as seems likely in Missouri, Kafkaesque rules blend with right-wing ideology to block American citizens like Shirley Preiss from voting, collateral damage in the Republican-led war on democracy. "I was very disappointed," she says of the state's roadblocks to voting. "It's not acceptable. I've always voted."


Joe will appear on my BlogTalk Radio show today, at 5:30 p.m, EST, co-hosted by Huffington Post blogger Tom D'Antoni, along with the legislative director of Missouri Acorn, Julie Terbrock. While the political world may be talking about the value of the Edwards endorsement to Obama, the little-noticed story that could shape the election is being told on the ground in the day-to-fight of patriots like Shirley Preiss to win the right to vote, and the advocacy groups, such as ACORN and the Arizona Advocacy Network, fighting on their behalf. You can listen online or phone in to learn more about these and other critical political issues every Thursday.

And even though voting rights and fair elections should be a bi-partisan issue, the hard truth is that Democrats can't win in Missouri or elsewhere unless the constitutional right to vote is upheld -- and the GOP's vote-suppression schemes are stopped. To keep up to date on these issues, perhaps the best single place to go is the Project Vote's blog, along with Brad Blog , Voters Unite news round-up, Pew's Electionline Today news site, and the Democracy section of Alternet -- and get involved.

Here's Joe and his mom Shirley holding up the Constitution. What will you do, living in Missouri and elsewhere, to fight to ensure that this document guaranteeing voting rights is upheld in practice?
They deserve no less from the rest of us: 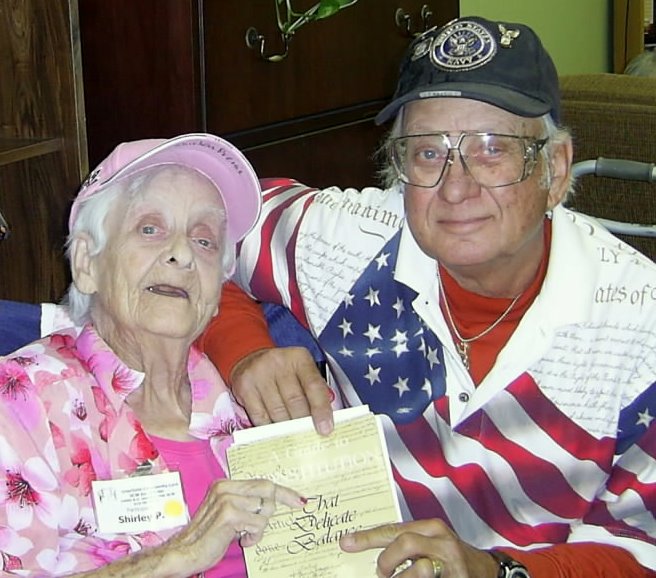 ********
You can hear "Joey" Nemnich tell about his fight for his mother's voting rights in Arizona and Missouri ACORN leader report on the ID fight there, along with more about this year's election controversies, on "The D'Antoni and Levine Show," with my co-host Tom D'Antoni, a Huffington Post blogger, this Thursday at 5:30 p.m., EST, at BlogTalk Radio

Gas Prices Dip To Level Not Seen Since Early March