A Brooklyn tattoo artist inked his own dog on Tuesday, according to a photo he posted on Instagram, while the pet was unconscious following a medical procedure.

The artist, who goes by the name Mistah Metro, can be seen in the photo tatting an arrowed heart on the brown and white pit bull's shaved right shoulder. "One of the many reasons my dog is cooler than yours!" Metro captioned the Instagram post, which was first noticed by Gothamist. "She had her spleen removed today and the vet let me tattoo her while she was under."

After the initial round of outrage sparked by the Gothamist article, Metro removed the photo. Two hours later, however, a new account started by someone claiming to be Metro appeared, with the same photo of the tattooed pooch. “Had to delete my account and make up another," the caption read, "some people just don’t appreciate anything! It’s an ANIMAL with a tattoo.” 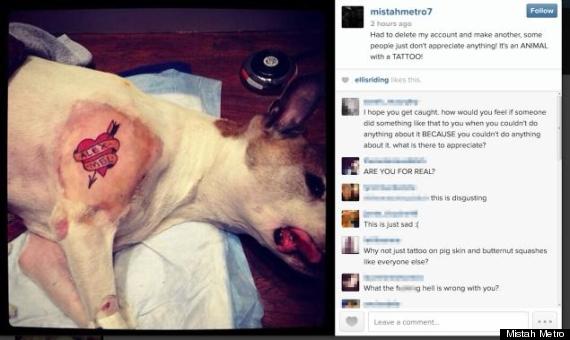 Metro works at the Red Legged Devil in Prospect Heights, which is owned by Chris Torres, of NY Ink fame. Torres sent out a tweet Wednesday distancing the shop from Metro's stunt:

@mister_smiley @REDLEGGEDDEVILS @MistahMetro7 that didn't happen at the shop, so it's none of my business. That was done at a vet's office.

He also took the time, however, to (kind of) defend his employee:

@mister_smiley @mikeisthereason you guys are aware that the ASPCA tattoos dogs & cats once they've speyed or neutered them, right?

The ASPCA then released the following statement to Gothamist:

The ASPCA condones the use of tattooing for only identification purposes following spay or neuter surgery. This practice helps animal welfare professionals clearly identify animals that have been altered, thereby preventing unnecessary future surgeries. This painless procedure is performed by a licensed veterinarian or veterinary technician while the animal is under anesthesia. The marks are very small and have a specific purpose, which is to avoid inflicting undue pain and stress later if that animal is unknowingly brought in for a spay surgery a second time.

Tattooing an animal for the vain sake of joy and entertainment of the owner - without any regard for the well-being of the animal - is not at all comparable to the incident in question and is not something the ASPCA supports.

Torres also tweeted a link to an apparent apology penned by Metro. The link however, mistahmetro.tumblr.com, seems to have been disabled.

Although frowned upon by animal advocates, tattooing an animal is not illegal in New York. Last year, Assemblywoman Linda Rosenthal introduced a bill that would prohibit "animal piercing and tattooing except for identification or medical benefit."

"Last year I heard the story of a Pennsylvania woman who was piercing the necks of kittens and selling them as gothic accessories," Rosenthal told The Village Voice at the time. "There are hundreds upon hundreds of Youtube videos and websites that show animals that have studs in their ears, tattoos on their backs, and it's really horrifying. I want to make it a criminal offense."