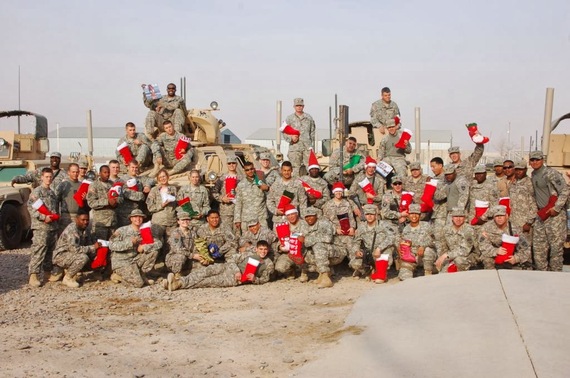 I'll admit it. I'm a sap, a spineless, simpering, soft-hearted, sentimental fool. I'm one of those people who tears up at the slightest little things -- a tidbit of news, an earnest child, the national anthem playing in the distance, a touching television commercial.

And when the holidays roll around, I'm schmaltzier than ever.

The kids are mortified with embarrassment and Francis thinks I need to get my hormones checked. But how can I be expected to hold back the waterworks during the holidays? With all the old movies that transport us to our childhoods, the aroma of baking cookies, the spontaneous generosity of folks dropping change into red buckets outside grocery stores, the snow globes with their softly suspended scenes, the familiar songs we hum while wrapping gifts, and the thousands of tiny twinkle lights.

This week, I blubbered while watching "It's a Wonderful Life" for the millionth time, I felt a lump in my throat anticipating our college kids coming home, and I got slushy after seeing a video of dogs snuggling with babies on Facebook.

But the hardest yank on my heartstrings came while Francis and I were watching the Navy Band Northeast's holiday concert on base. There we were, nestled all snug in our auditorium seats and holiday sweaters, feeling Christmassy and patriotic all at once. When one musician took the stage in his dress cracker jacks and belted out a perfect medley of classic carols, my tear ducts were primed and ready for action.

Between sets, heart-warming video shorts were projected onto a screen behind the stage. The audience laughed at a segment featuring young Navy plebes botching the words to "Feliz Navidad," and "Awww"ed in unison at clips of military brats sending sweet holiday messages to deployed moms and dads.

One small boy in a crooked Santa hat said, "Dad won't be home for Christmas. So, we're going to my cousin's house. My cousin's house is ... [big brown eyes searching for the right words] ... really small." Then, after an adorable pause, the boy lit up, smiled and said, "But it's really cozy!"

The darling innocence of this boy -- this military child accustomed to making the best of hard times -- knocked my emotions off balance. One more tug, and I knew I was a goner.

So, I sat quietly, flush from the collective heat of the festively-garbed crowd gathered in the auditorium, praying that the director would instruct the band to play "Grandma Got Run Over By a Reindeer" to jerk me away from the emotional cliff. But the next video clips of surprise reunions with deployed servicepersons had me groping for a tissue in my purse.

I realized that in the military, we take for granted that loved ones will be deployed during holidays, birthdays, graduations and special occasions. It is part and parcel of our unique lifestyle. When Francis was on a yearlong deployment, we adjusted during the holidays. We got together with friends and extended family members to fill the void. When he was standing the watch during other holidays, we pivoted to accommodate his schedule. There were no tears - it was military life.

According to the Department of Defense, roughly 220,000 American military service persons were deployed and away from their loved ones last December, in more than 100 countries and on every continent. This staggering figure does not even include the thousands more military personnel that will be on duty this week, sitting in silos, standing on watch floors, guarding gates, on the job, protecting and defending while we are home enjoying our families.

So, now, after 23 years as a military spouse, I see the nobility in military families' sacrifices during the holidays. I honor their strength and positivity in the face of hardship. Without shame or embarrassment, I shed a tear, or a bucketful, when I think of how blessed Americans are to have an all-volunteer force of military men and women who serve so that the rest of us, snug and safe with our loved ones, can be home for Christmas.

This year, I might be misty under the mistletoe, but I am grateful for the gift that is the United States Military.