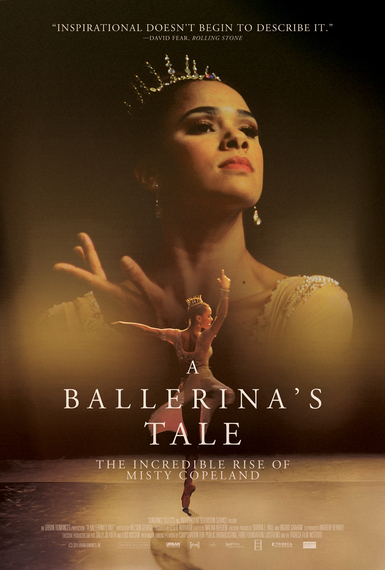 No other dancer performing today receives as much scrutiny as Misty Copeland. An inspiration both inside and outside the dance world, she has garnered deals with Under Armour, graced the covers of Essence and Time Magazine and starred on Broadway's On the Town. But American Ballet Theatre's first African American Principal Dancer isn't done yet. Her new documentary A Ballerina's Tale provides a film accompaniment to her New York Times bestselling book Life in Motion: An Unlikely Ballerina. The film strikes a delicate balance between promoting Copeland as a ballet outsider, a pioneer in a foreign land, and showing Copeland struggle with issues all dancers face: injury, weight and the myriad of other lifestyle pressures of bring a professional dancer.

Director Nelson George followed Copeland for two years, chronicling her breakout performance in the title role of Alexei Ratmansky's Firebird and culminating in her debut as the Swan Queen in Swan Lake and subsequent promotion to Principal Dancer. George sat down recently with the Huffington Post to discuss his approach to capturing Misty's story, and what makes her resonate with people both within the ballet community and the larger public.

Huffington Post: How did you first hear about Misty?

Nelson George: I'd heard of Misty in passing before meeting her because she'd danced with Prince at some concerts in NY and LA. So I had seen pictures of her and a bit of video.

HP: What was your experience with race in the ballet community as an outsider?

NG: In shooting Misty these last few years, I came to see how segregated the classical ballet world is. While black dancers excel at every type of dance, from street to modern, it's been hard for exceptional talents to gain entry to the major classical ballet companies. There are stereotypes about the black body and expectations about what audiences will accept that sometimes made me think I was making a film set in the 1950s. American Ballet Theater developed Misty and helped her cultivate her talent. For that they are to be commended. But Misty is not the only black dancer of her generation that deserves a chance to dance with the biggest companies. Hopefully we'll be discussing a host of Mistys at ABT and elsewhere in the near future.

HP: The film strikes a delicate balance between portraying Misty as a racial pioneer -- but also as just another professional dancer facing the same struggles with weight, injury and self confidence. How does Misty's race allow for a different prism to view the same struggles that every dancer faces?

NG: In the two year snap shot of Misty that forms A Ballerina's Tale, she is both an extraordinary exception in classical ballet and typical of all dancers. Her race gives her story a heightened sense of drama. But the stakes ("Will she be made a principal dancer? Will she recover from her injury?") could be the tale of any dancer anywhere. So the central questions the film poses are complicated by Misty's unique place in the classical ballet world. It's what gives the film sizzle and informs her thinking as she struggles to recover from surgery.

HP: You have really captured the emotional excitement around Misty and her work. What is it about Misty's persona that is so attractive to so many people?

NG: Misty is one of the hardest working, most focused people I have ever met. There's a purity to her sense of mission that everyone who sees or hears her feels. She is intensely dedicated to her art and I think the documentary testifies to that. Aside from her distinctive dance style, I believe the core of Misty's appeal is her passion. I think that's what makes her inspirational. There's an internal light inside that burns bright and draws people to her.

HP: A lot of little girls will see this film and be inspired by Misty's story. What affect would you like this film to have on the next generation of dancers?

NG: I am hopeful that by telling this part of Misty's story, we've made a film about overcoming obstacles, both institutional and personal, that inspire dancers and also all young women with dreams difficult to manifest. I have three nieces who are all working to build their lives. They aren't dancers, but I believe that Misty's story will speak to them. 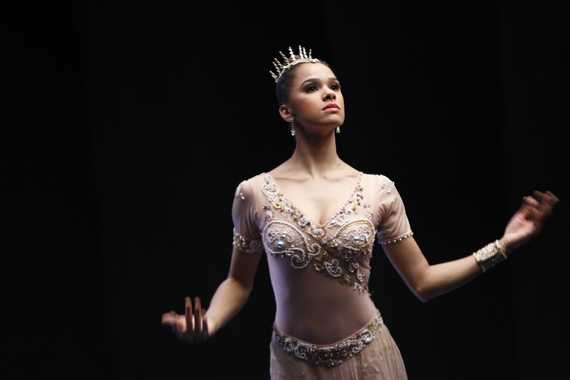 HP: You've told the stories of other African American pioneers in your previous work. What common threads have you found with Misty's story, and in what way is her story unique?

NG: I've worked on books and films about many aspects of black life and if you'd had asked me four years ago if I would be directing a documentary called A Ballerina's Tale, I would have said "No way." This is not something that I would have expected myself to do. But a great story is a great story. Misty's life says there are still barriers to full inclusion in American life, that there are still pioneers banging on doors and that the struggle for true equality takes many forms.

NG: Just because I made an film about Misty Copeland I do not see myself as a ballet expert. So I don't presume to have detailed answer to this question. Misty and many of the women we interviewed for the film have a lot to say on the subject. What I can say is that a new, more flexible vision of the classical ballet body, one that embraces a wide range of body types would be a huge step.

HP: What did you learn about ballet as an artform through working on this film?

NG: For me, classical ballet is a specific, very traditional form that could use a big gust of fresh air. What Misty represents is change and that frightens a lot of people who feel classical ballet is fine as is. Misty represents, not just a opening up to other races, but modernity itself. Will those long term subscribers who attend the Met be open to dancers who look different and move differently? I think the ticket sales on the nights Misty performs suggest they already are. The gate keepers need to take a deep breath and let change happen.

HP: What did you learn about artistry and expression from working with a dancer as your subject?

NG: Dancers are an incredible combination of artist and athlete. They defy gravity. They define grace. They move with speed and power like a pro athlete, yet perform in service to music, costumes and fictional characters. They do all this with the knowledge their careers will end before middle age and that the work will not be seriously lucrative. I believe they are some of the truest artist we have.

HP: What do you predict the ballet community will look like in a few generations?

NG: If Misty's career has a long term impact, the classical ballet world will look browner and curvier.