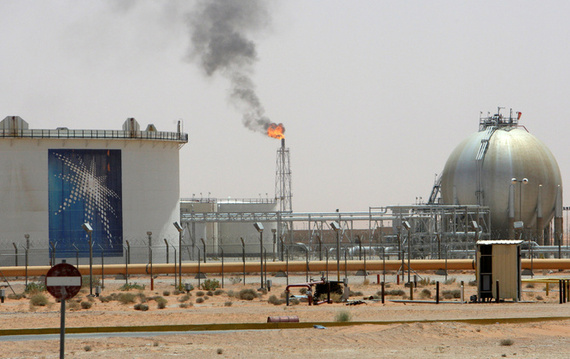 Saudi Arabia, and the Gulf states, are concerned by the election of Donald Trump. Ali Jarekji/Reuters

Muslims everywhere were offended and psychologically shocked by his views on immigration, racism, Israel, Arab and Muslim states, and indifference to global political and economic suffering.

Trump is perceived as a man who measures world issues through race, religion and loyalty to capitalism rather than the long-held American values of tolerance, liberty, human rights and the great "melting pot".

Trump's statements about Latinos, Muslims, black people and women, alongside his lack of nuance, makes it seem as though we are heading towards a clash of civilisations.

Many, including former British prime minister David Cameron, have claimed that such messages of prejudice only encourage extremist groups such as ISIS, al-Qaeda, Fath al-Sham Front, religious zealots and white supremacists.

Trump's proposals for dealing with vital and existential issues to Muslims, such as the establishment of Palestinian state or ending the wars in Syria and Iraq, Yemen, Libya, and Afghanistan, betray either a profound misunderstanding of world events, or a dangerous bias that will only lead to more conflict.

Even if there is no official united reaction in the Muslim world to Trump's election, some examples can illustrate the mixed feelings in the region.

Relief for Syria and Egypt

The regimes in Syria and Egypt would likely have been relieved that Trump's rival, Hillary Clinton, failed, since they were expecting a harsh hand against their regimes.

Egypt feared that Clinton would support the Muslim Brotherhood, which would weaken its military regime under Abdel Fattah al-Sisi. Trump, on the other hand, says he will place the organisation on the terrorist list. This would weaken its struggle with the Egyptian regime and other regimes throughout the Muslim world - in Syria, Iraq, Libya, Tunisia, Morocco and Yemen.

So President Sisi likely considers Trump's victory as his own, and thinks he could become the next true strongman of Egypt, with US blessings.

In Syria, President Bashar al-Assad is delighted with Trump's views on terrorist organisations and the need to eradicate them, seeing him as "a natural ally".

Assad has clearly embraced Russian President Vladimir Putin's seemingly good relationship with Trump, a shift that could seriously affect the political landscape in the region.

This new alliance has the potential to unite the US and Russia, as well as Syria and Iran, to eliminate the rebel groups fighting President Assad, as well as terrorist groups such as ISIS and Fath al-Sham Front.

It will help keep Assad's regime in place, reversing Barack Obama's policy towards Syria and angering traditional American allies such as Saudi Arabia and the United Arab Emirates

Concerns in the Gulf states

If the Gulf states, especially Saudi Arabia and Qatar, are happy to see the end of the Obama administration, because of their frustrations with his nuclear deal with Iran and low-key support of Syrian opposition groups, they also worry about Trump's criticism of Muslims and his declarations about creating a safe zone in the Middle East, that the Gulf States will pay for.

Riyadh has also reacted strongly to Trump's comments that the US needs to block all oil imports from Saudi Arabia. The president-elect's vow to secure US energy independence "from our foes and the oil cartels" was perceived as an attack against the Organisation of Petroleum Exporting Countries (OPEC), controlled more or less by Saudi Arabia.

But for the US to reduce its oil dependence also means it could reduce its engagement in the region's conflicts.

Israel and oil have historically been seen as strategic assets to the US. This led America to create a security regime for the Middle East and invest a lot in military expansion. The US war against Iraq after the invasion of Kuwait and the second Gulf War are emblematic of this.

Now, with the declared intention of finding new resources for oil elsewhere, Trump could be tempted to decrease his military commitments to the region.

The Islamic Republic of Iran feels apprehensive about Trump's attitude toward the country, and especially the nuclear agreement it struck with the US in 2015.

If, once in the White House, the next US president tinkers with the agreement, it will strengthen the hand of hardliners, including the Revolutionary Guards, who have argued that the US is not sincere in its deals and who believe the US wants to control Iranian economy.

A Trump presidency will thus weaken the hand of the moderates, headed by President Hassan Rouhani, who wants Iran to open up politically and economically to the US, and the rest of the world.

If Iran is treated as the centre of a new global axis of evil, as Israelis and Saudis want, the nuclear agreement is sidelined or changed and the sanctions are not lifted, the US risks the possibility of a strong reaction from Iran.

This could lead to more radical repositioning in the Middle East. A roadmap to peace in the Middle East requires positive engagement with Iran and others with the goal of reducing wars in conflict zones and deflating rising tensions in the Persian Gulf, the Gulf of Aden and the Red Sea.

In Turkey, President Recep Tayyip Erdoğan feels that his relations with the US will not worsen with Donald Trump in the White House. He would appreciate a new US policy that does not support the separatist Kurds.

Turkey's strongman is pleased that Trump's priority does not seem to focus on human rights, division of power, and fair political representation.

Trump's seeming isolationism could serve the Turkish agenda for expansion in the region and having a free hand with the Kurds, Syrian and Iraqis. But Trump's Islamophobic statements do create anxiety and fear of backlash in the US and Europe.

The delicate subject of the extradition of Fethullah Gulen, accused by Erdoğan of masterminding this year's attempted coup in Turkey, will have to be dealt with; but it can wait for the inauguration of the new US president.

More important to Turkey is the continuation of US-Turkish strategic cooperation and benefiting from Washington's and NATO's security umbrella. Nothing seems to be certain in this area for now.

The whole relationship between America and the Muslim world could be radically changed over the next few months. Conservative Islamic and Arab countries such as Saudi Arabia were waiting for their preferred choice, Hillary Clinton, to be elected. They feel that the US they have known for decades is no more.

From their point of view, one of the great risks is to see Russia and its allies in the Middle East take the upper hand in winning the wars that are raging.

Radical Islamism, Wahhabi fundamentalists and the Muslim Brotherhood could be heavily targeted as the linchpin of terrorism, with consequences that can't be foreseen.

The US seems to be considering taking the back seat in regional conflicts, and the priority of the new administration seems to be not to bail out traditional US allies and groups funded or created with their support.

Donald Trump has not yet developed a concrete foreign policy, but his hard lines on Muslims and Arabs have not brought about the desired-for tranquillity that people want to see in the region.