In the realm of humanity, almost everything is misunderstood much like ostriches. Misunderstanding is part of human cognition. Not a single human being is fully understood by others and not a single human being fully understands others. Routinely, humans misunderstand, misinterpret, or simply fail to understand events, actions, and motives. Human misunderstandings extend to planets, plants, animals, inanimate objects, and forces of nature. God too is misunderstood. Some misunderstandings are inadvertent, some on purpose. "Be very, very careful what you put in that head because you will never, ever get it out." This observation attributed to Cardinal Thomas Wolsey (d. 1530) cautions against righteousness and self-righteousness.

Misunderstandings have various pedigrees. They may arise from prejudice, self-interest, faulty observations, and defective intellect. Literature, law, science, social studies, even wisdom texts contain misunderstandings that, with time, turn into stubborn beliefs difficult to mend. Some misunderstandings may quietly simmer in cultural cauldrons; some abruptly erupt into violence, brutality, and carnage. Any new research or analysis that challenges entrenched misunderstandings may be discounted and disregarded.

Consider the misunderstandings about ostriches. Centuries ago, the ancient Egyptians used ostrich eggs to store perfumes and their feathers to make hand fans; and the Nubians offered ostrich eggs and feathers as tribute to Egyptian Pharaohs. Because ostriches were rare birds found only in some parts of Africa, and as their population declined, they were mythologized (misunderstood) on scant evidence and lavish conjecture. Notoriously, they have been portrayed as stupid birds that in the face of danger bury their heads in sand, erroneously supposing they are fully hidden from predators. This widespread belief among humans is derived from faulty observations, folk tales, and wisdom texts. 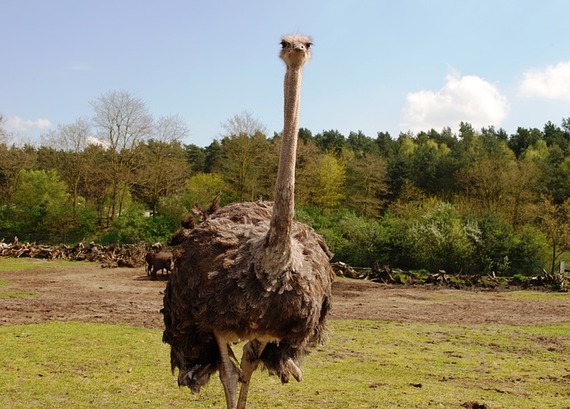 Ostriches are the world's largest birds. Weighing over 250 pounds and taller than most human beings (7 to 9 ft.), ostriches have long necks like camels and don feathers and wings that can stretch out to make a wingspan of seven feet. They can run fast, sprinting up to 43 miles an hour. They are strongly built with formidable long legs and two-toed feet. Ostriches can kick to kill large animals, including lions. These facts are conveniently ignored in fables about ostriches.

Comparing ostriches with storks, a wisdom text extols the elegant flight of storks and deprecates the clumsy tottering of ostriches. Focusing on female ostriches, the wisdom text makes a series of fabulous assertions: It portrays these birds as foolish mothers who leave their eggs on surface of the sand to be crushed by wild beasts; it presents female ostriches as cruel mothers who treat their young harshly as if they are not hers. This erratic behavior of ostriches, the wisdom text says, is inevitable "for God did not endow her with wisdom or give her a share of good sense."

The ostrich fable has entered the realm of law. In the United States, willful ignorance is equated with ostrich behavior. For example, if a person willfully avoids in confirming his suspicion that he might have rented his house to a drug gang, the judge may give an ostrich instruction to the jury. Some enlightened judges know that ostriches do not engage in any such behavior, and yet they tolerate law's ostrich association with willful ignorance (US v. Black, 530 F. 3d 596 - Court of Appeals, 7th Circuit 2008). Even in 2015, courts have given the ostrich instruction to juries.

The myth of ostriches burying their heads in sand has been studied and corrected in ornithology. Evolution has endowed ostriches with the largest eye of any land animals. So empowered, ostriches can see the presence of predators at far distances. Seeing approaching predators, ostriches lower their long necks and level their bodies as their plumage blends with surface of the sand, creating an intelligent camouflage. Ornithology also explains that ostriches, males and females, are fierce defenders of their offspring. They play dead but leap to fight if inevitable and may kill predators with their powerful kicks. (African Journal of Ornithology is also called Ostrich.)

From the ornithology of ostriches, one must not hastily conclude that science is superior to religion - another misunderstanding popular in secular enclaves. Science, a human discipline, much like religion, law, and literature, is not immune from misunderstandings. Charles Darwin was dead wrong in his theory explaining how parents transfer traits to children. The Newtonian physics, which ruled the world for a few centuries, is no longer considered fully accurate. Social sciences, importing natural selection and survival of the fittest in the study of cultures and societies, have done much damage in falsely stratifying the human species. To make matters worse, scientists and researches may fabricate data to promote dubious findings. Prestigious medical journals and institutions, such as Lancet and Mayo Clinic, may have to retract research once considered credible.

World events warn us about the tragic consequences of real and fabricated misunderstandings. Drone attacks in Afghanistan have annihilated wedding parties mistaking them as Taliban fighters. The 2003 invasion of Iraq was launched on a (fabricated?) misunderstanding that Saddam Hussain's weapons of mass destruction posed an immediate threat to world peace.

In Henry IV, Shakespeare's knowledge about ostriches' ability to fly is debatable. Yet Shakespeare understood the lethal power of misunderstandings. In Othello, the villain sows the seeds of misunderstanding in Othello's heart against his wife, Desdemona, by planting Othello's handkerchief in Cassio's lodgings as evidence of liaison between Cassio and Desdemona. The misunderstanding poisons everything Othello sees and hears about Desdemona, eventually killing her to avenge non-existent infidelity. I wonder how the play would unfold if Othello were an ostrich.

This is an excerpt from the author's forthcoming book, Secrets of Beings.