WASHINGTON -- The push to make Indiana a right-to-work state has caused a deep partisan divide in the state legislature, with Democratic lawmakers doing all they can to block the GOP majority from passing a bill.

Leon Fink is now a history professor at the University of Illinois at Chicago, specializing in the U.S. labor movement.

But in 1966, he was a senior handing off his gavel as North Central student government president to Daniels, a junior classmate. The moment was memorialized in a picture (here and below) in the school yearbook, with Daniels at the microphone and Fink in the background. Fink recently scanned the image from his own yearbook.

He said that while he hasn't had any extended personal contact with Daniels since their younger years, he has obviously been following his career -- and deeply disagrees with his support for right to work, which would bar unions from automatically collecting dues from workers' paychecks at private companies.

"When you review his record, I think he's more like a Scott Walker in velvet gloves," said Fink, referring to Wisconsin's Republican governor who may be facing a recall election from unions and Democrats unhappy with his push to limit collective bargaining rights for public workers.

"As governor, I think he's brought the whole tool kit to bear on Indiana. I think his style is more intellectual and folksy, but his actual policies and programs are -- he brings the complement of right-wing public policy thought to bear on the job," he added.

Fink has composed an open letter to Daniels, objecting to his views on right to work:

When you were elected governor of Indiana (just as when I handed you the gavel of the student council presidency at North Central High School in 1966), you promised to represent the interests of all your constituents, not just your biggest backers. Instead, you have chosen to demonize an entire segment of the state's citizens who are also labor union members.

Unions have long been an important part of the social and political fabric in Indiana; indeed until recent times more union headquarters (including the carpenters and the teamsters) were located in Indianapolis than in any other American city.

Yet, you have chosen to wage class war against the state's working people -- first by leading your Republican-dominated state legislature to gut the collective-bargaining rights of public employees and now by promoting "right-to-work" legislation that would further weaken already-beleaguered private-sector unions by denying union majorities the dues (or equivalent fees) needed to service the contracts that protect the negotiated benefits and wages of all workers, union members and non-union members alike.

Indiana was long proudly known as the "crossroads of America." Do you really want to turn it in to "doormat of the One-Per-Centers"?

Daniels' office did not return a request for comment. 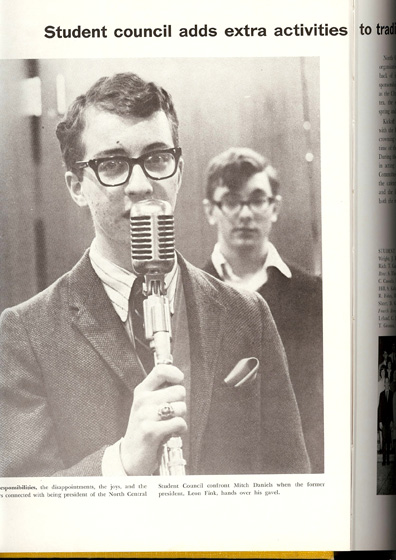