WASHINGTON -- On Oct. 8, Sen. Mitch McConnell (R-Ky.) will argue to the Supreme Court that all campaign contribution limits should be eliminated and that candidates should be able to accept unlimited donations.

Although McConnell is not a party in the case of McCutcheon v. Federal Election Commission, the Supreme Court has granted the Senate minority leader time during oral argument to present his views: that campaign contribution limits are an unconstitutional burden on free speech and that the court should give contribution limits a higher level of scrutiny than it has in the past. McConnell will be represented by lawyer Bobby Burchfield.

McCutcheon v. FEC challenges the aggregate limit on donations to federal candidates, political parties and political action committees, which bars an individual donor from giving more than $123,200 in total during the 2014 election cycle. McConnell wants to go much further by forcing courts to treat all campaign contribution limits as they treat campaign expenditure limits, which were found to be an unconstitutional burden on First Amendment rights in the 1976 Buckley v. Valeo decision.

The senator, a prominent opponent of campaign finance reforms, was the lead plaintiff 10 years ago in McConnell v. FEC, a Supreme Court challenge to the McCain-Feingold Act. Burchfield argued in that case as well.

The individual contribution limits that McConnell also wants to eliminate currently restrict a donor to giving $2,600 to a candidate for each of the primary and general elections. Absent these limits, people running for federal office could accept checks of the same size routinely donated to super PACs.

And some donors are willing to write very generous checks. The largest single check written to a super PAC in the 2012 election was $5 million. The largest total amount from one donor to one super PAC in that election came from Texas industrialist Harold Simmons, who gave $20.5 million to American Crossroads. 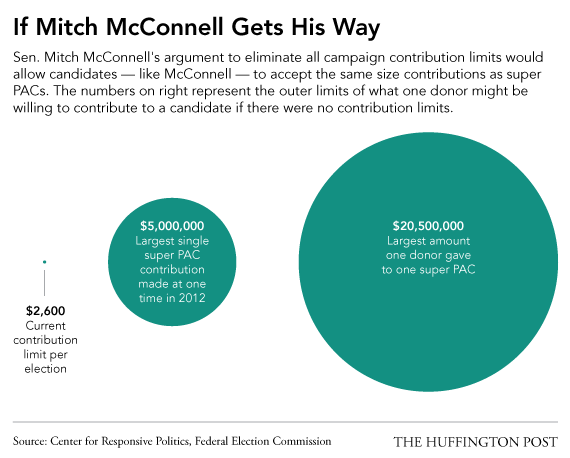 The Supreme Court may not agree with McConnell that all contribution limits should be overturned now, but the justices could still accept his argument that contribution limits should be treated with the same level of scrutiny as restrictions on campaign spending. Such a ruling would overturn precedent going back to Buckley v. Valeo and set the stage for a future case to eliminate all such limits, according to Campaign Legal Center President Trevor Potter.

"While this request sounds legalistic in nature, if the plaintiffs and Senator McConnell are successful in convincing five Justices of this argument, then not only will the Court strike down the current aggregate contribution limits, but in the future it will be much easier for those seeking to remove all contribution limits and allow unlimited contributions to candidates and parties to challenge any contribution limit in court," Potter wrote on the center's blog.

McConnell's arguments will likely find a receptive ear among some of the conservative members of the court. Justices Antonin Scalia, Anthony Kennedy and Clarence Thomas have all said that the distinction between contributions and expenditures is wrong and that the court should find contribution limits to be a violation of free speech rights. The views of the court's two other conservatives, Chief Justice John Roberts and Justice Samuel Alito, are less clear.

"The time has come for the Court to revisit the distinction [between contributions and expenditures]," the amicus brief submitted by McConnell declares.

The brief argues that contribution limits restrict the First Amendment rights of speech and association for both contributors and recipients of campaign cash.

Contributors' free speech rights are restricted, according to McConnell, because "for many if not most persons," a campaign contribution is "by far the most effective means of supporting a preferred candidate" and monetary limits prevent a person from demonstrating the true intensity of his or her support in the way that someone volunteering time to a campaign can volunteer unlimited time. The recipients of that money also have their rights restricted because contributions "directly enable speech" and because they have a right to associate with contributors "at varying levels of intensity."

Supporters of contribution limits contend that the fact that the justices will hear McConnell's broader attack on campaign regulation gives credence to their arguments that the McCutcheon case is simply a Trojan horse for the future gutting of all contribution limits.

"This is a not very thinly disguised first step to try to get an absolute anything goes-no limits regime on campaign contributions," Charles Fried, a former solicitor general under President Ronald Reagan and author of an amicus brief submitted by Americans for Campaign Reform, earlier told The Huffington Post.