Once again, the specter of a tan suit is rearing its head in Washington, D.C. This time, though, the offender isn’t Barack Obama but Senate Majority Leader Mitch McConnell.

On Monday, the term “tan suit” was trending on Twitter after photos were released showing the Kentucky Republican sporting some pale beige menswear while meeting with President Donald Trump.

As readers who were alive in 2014 will no doubt recall, then-President Obama wore something similar at a press conference that August, rocking American democracy to its very foundations. Republican officials like Rep. Peter King (N.Y.) criticized Obama for the grave misstep.

Joking aside ― tan suits are obviously not a big deal, regardless of who’s wearing them ― references to Obama’s suit have become a kind of shorthand in the Trump era, as the Post notes ― a way of contrasting the relative lack of scandals during Obama’s presidency with the near-constant ones that have characterized the Trump administration.

On Monday, many Twitter users pointed out the hypocrisy of McConnell wearing the same kind of threads that Republicans once attacked a Democratic president for donning.

Today Mitch McConnell wore a tan suit in the Oval Office, which is nothing like the time Barack Obama wore a tan suit, the worst scandal in presidential history. pic.twitter.com/eRiQafhfv1

Is this a tan suit or is McConnell molting his skin? https://t.co/J2CWOt2sGz

Remember when Obama wore a tan suit and every Republican acted like he just gave Russia our nuclear launch codes? https://t.co/yYGJX9GQVo pic.twitter.com/W9jw3bzzN4

Mitch McConnell in a tan suit? The year of controversy continues. pic.twitter.com/bxnmnOxHYU

But it turns out, people did have a good reason to criticize McConnell’s outfit.

Some people speculated there was a method to McConnell’s madness:

things are going so badly for the GOP mcconnell’s trying to camouflage himself pic.twitter.com/mYJ6s3wt8v

Some suggested that other colors seemed more apt for the majority leader.

Since we’re here for Mitch and his tan suit, how’s this red white and blue ensemble looking on him? pic.twitter.com/UgzVqgVzHS

Actor Kirk Acevedo, known for his work on shows like “Oz,” “Fringe” and “Arrow,” was brave enough to ask the real question on everyone’s mind: Who wore it better?

WHO WORE THE TAN SUIT BETTER?

Mitch McConnell Wears A Tan Suit, Even Though It Caused A Scandal For Obama
Obama 'Shames' An Entire Nation By Wearing A Tan Suit 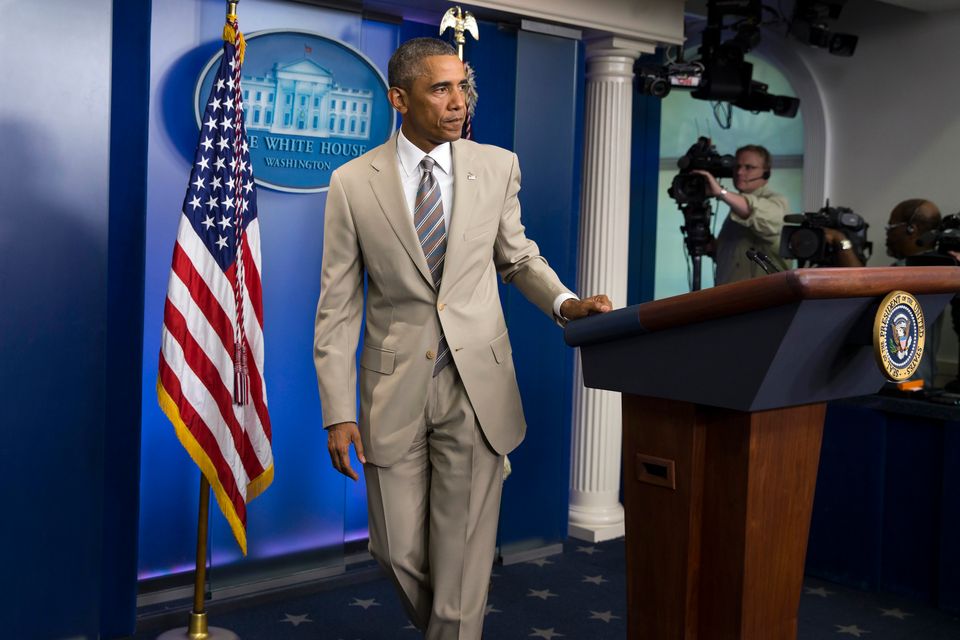 1 / 10
APTOPIX Obama
President Barack Obama leaves after speaking about the economy, Iraq, and Ukraine, Thursday, Aug. 28, 2014, in the James Brady Press Briefing Room of the White House in Washington, before convening a meeting with his national security team on the militant threat in Syria and Iraq. (AP Photo/Evan Vucci)
ASSOCIATED PRESS