Architect and urban designer Mitchell Joachim hates the idea of a lower-pollution New York a hundred years from now. He envisions a city that actually eliminates pollution.

"I want a city that cleans up the impact of the last hundred and fifty years of industrial waste. It has to have a positive impact," said Joachim, pacing up and down his studio in the Metropolitan Exchange building on Flatbush Avenue in Brooklyn.

At a time when most progressive urban designers try to make cities greener, this co-founder of the nonprofit design group Terreform ONE and his team are on a crusade to radically change the notion of how cities like New York will function in a hundred years. Only completely flipping ideas about housing, transportation, and recreation spaces can city planners project a revolutionary urban habitat, according to Joachim and his crew.

"Right now everyone lives in a brick lump, and we all think we're happy," he said, shaking his dreadlocks. "This is garbage."

A TED fellow and selected by Wired magazine in 2008 as one of the 15 people "the next president should listen to," Joachim would prefer houses literally made of trash. Terreform ONE has calculated that New York City disposes 38,000 tons of waste per day, enough material to build a 54-story skyscraper of compacted waste. The design group wants to remake the city using the landfill at Fresh Kills as a resource. Different materials can be used for different purposes: clear plastic for windows, organic matter for temporary scaffolds, and metals for primary structures.

The provocative architect and his team have conceived the Fab Tree Hab, a home grown from native trees. This would create dwellings fully integrated into an ecologically-sound community.

"Some people complain that it takes 7 to 10 years to grow a village of these homes, " Joachim scoffs. "But our society waits 12 years for a bottle of scotch! I think we can have some patience."

Anyone who does not dream of living in an apartment made of trash or inside a tree need not worry: Joachim has come up with houses made of meat. Shelters composed of meat cells can be grown in a lab where tissues, skin, and bones replace insulation, siding, and studs. For windows and doors, he envisions sphincter muscles that can open and close. "We made very expensive beef jerky with a very long shelf life," he said.

Terreform ONE's sci-fi version of 2120 New York has also rethought cars radically. "Today we have shining, metal, precious boxes, and if you touch my BMW with your Honda I'll probably kill you," Joachim said. "With soft cars, we will be able to rub up against one another, bump into each other, touch one another."

Most people, though, won't need to worry about soft cars. They will enjoy zipping up and down Central Park with flexible body jetpacks run on hydrogen peroxide. And in case all hell breaks loose, there is a parachute in the crotch.

Of course, Central Park is going to look a little different, too. Dotted with vertical farms that each feed 80,000 people, along with geothermal wells and waste adaptors, it won't just be a place for leisure. "In order to afford a self-reliant city we need productive green space," Terreform ONE co-founder Maria Alolova said. "A space designed to produce energy and food and to collect and filter water."

Joachim and Alolova ultimately aim to start cities from scratch, coming up with solutions that reduce the gap between science fiction and reality. "Let's have critical arguments about how we live," Joachim said. "Don't swallow the pill that someone else gave you. We can create a better city."

This is the first of a series of articles on innovative enterprises and non-profits based at the Metropolitan Exchange on 33 Flatbush Avenue in Brooklyn, a building where creative minds ranging from architects to videographers to biologists "cross-pollinate" as the landlord Al Attara likes to put it.

Terreform ONE organizes an annual design competition, and this year's theme is water in New York City. Check out http://oneprize.org. You can explore more Terreform ONE's projects here. 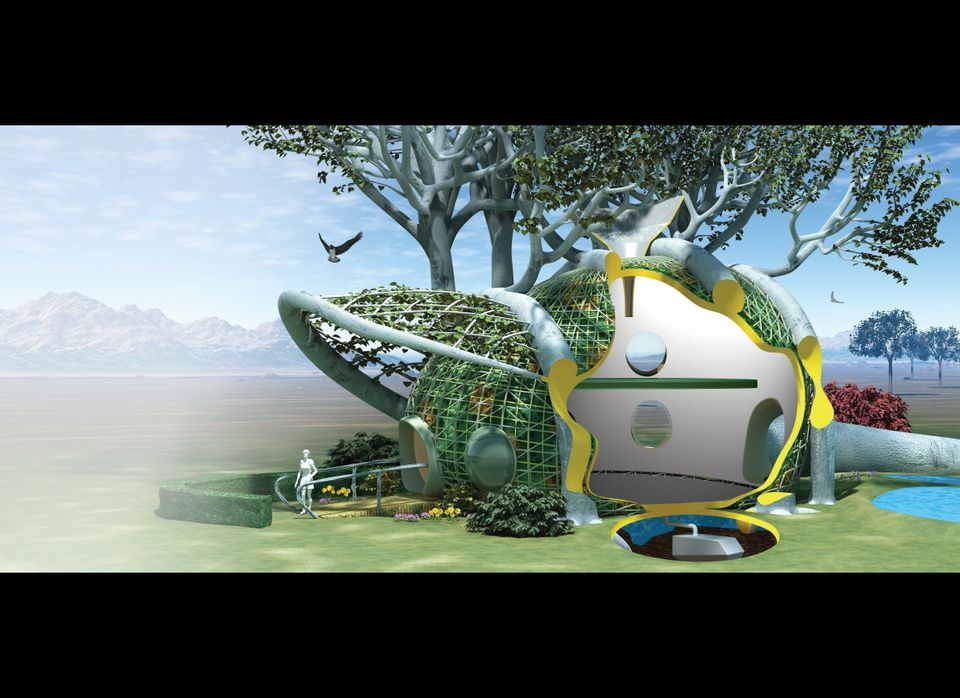 1 / 11
Fab Tree Hab
A home grown from native trees designed by Terreform ONE. A living structure is grafted into shape with prefabricated Computer Numeric Controlled reusable scaffolds. This would create dwellings fully integrated into an ecologically-sound community.
Terreform ONE