While President Obama has steadfastly pursued a diplomatic breakthrough with Iran, Congress is littered with the dead souls of war-hungry conservative assholes like Representative Louie Gohmert ("I think it's time to bomb Iran") and Senator John McCain ("Bomb, Bomb, Bomb, Bomb, Bomb Iran!"). Unless a potent combination of diplomacy, intellect and a determination to bring peace to the world can prevail, those who fail to learn from history may once again be doomed to repeat it.

Many look to the military for images of what a true hero is, can and should be. But there are numerous instances throughout literature in which a military man is depicted as a bit of a buffoon. Whether a narcissistic womanizer or an incompetent soldier, these characters provide plenty of comedic material as they attempt to put the military mind (feeble though it may be) in a lighter light.

Unlike the so-called homosexual agenda, most military organizations rabidly recruit impressionable youth to become the jarheads, grunts and sacrificial lambs of tomorrow. While some enlist in the hopes of achieving the perks and benefits offered to them by eager recruiters, many discover that the veterans' benefits they were promised (and fought for) offer less than they were led to expect. Yet, there are still many naive or confused young men who enlist in the military in the secret hope that it will "make them into a man."

Two of the most fatuous and vainglorious military men in literature (Miles Gloriosus and Sergeant Belcore) recently trod the stages of San Francisco theatres. In no time at all they were cut down to size by opinionated and forceful women with brains who are not so easily impressed by brawn. 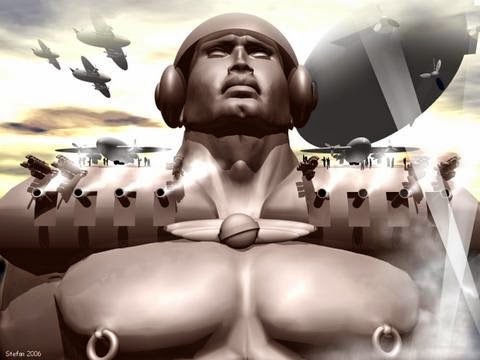 For the past 15 years, Jose Maria Condemi has been a familiar face at the San Francisco Opera (first as an assistant stage director and eventually graduating to directing full productions): Cosi fan Tutte (2005), The Elixir of Love For Families (2008), Tosca (2008 and 2014), Faust (2009), Madama Butterfly (2010), Carmen (2011), The Secret Garden (2013) and Un Ballo en Maschera (2014). One of his strengths lies in helping singers feel secure enough physically that they can engage with their colleagues dramatically (rather than resorting to the old-fashioned "park and bark" singing technique of yore). 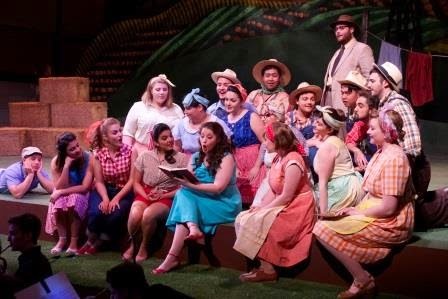 Adina (Evan Kardon) reads to the villagers in a scene
from L'Elisir d'Amore (Photo by: Christian Pursell)

Condemi was recently named as the new Director of Opera at the San Francisco Conservatory of Music, where his artistic influence was amply displayed in SFCM's student production of L'Elisir d'Amore. Although Gaetano Donizetti's 1832 comic opera is essentially about the power of wine to lubricate the emotions of two stubborn young rustics who are head over heels in love with each other, one of the supporting roles (Sergeant Belcore) presents a caricature of a vain, foolish military man who assumes that young women should fall at his feet, stroke his ego and immediately offer up their "virtue" to satisfy his enormous sexual appetite. 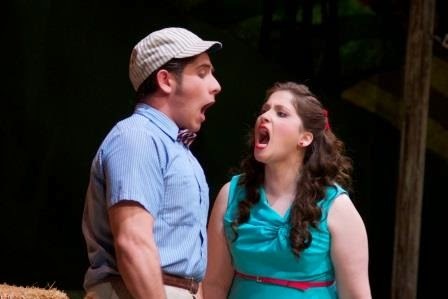 In this particular opera, Belcore (Daniel Cameron) meets his match in the form of a young country bumpkin named Nemorino (Mario Rojas) who is passionately in love with the most literate girl in town. When Adina (Evan Kardon) flirts with Belcore and agrees to marry the soldier as a way to torture the honest, goodhearted Nemorino, the frustrated young man turns for help to a traveling salesman, Dr. Dulcamara (Sergey Khalikulov), who boasts that his magical elixir can solve all romantic problems. Cheap wine usually can. 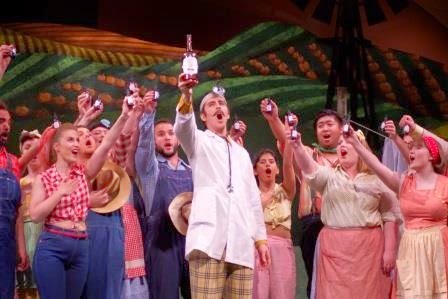 Dr. Dulcamara (Sergey Khalikulov) and the SFCM chorus sing the
praises of his magical L'Elisir d'Amore (Photo by: Christian Pursell)

With the Conservatory's music director, Scott Sandmeier, conducting, Steven C. Kemp's handsome physical production included a passarelle encircling the Conservatory Orchestra that served as a winding footbridge from the stage to one of the aisles in the Caroline H. Hume Concert Hall. Not only did this give the cast greater flexibility in playing areas, it also brought the principals out into the audience for some key moments (which were nicely showcased by the hall's warm acoustics). 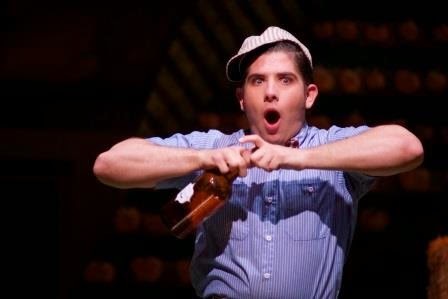 Mario Rojas as Nemorino in a scene from Donizetti's
L'Elisir d'Amore (Photo by: Christian Pursell)

Most impressive was tenor Mario Rojas (the first Nemorino I've experienced in nearly 50 years of operagoing that looked the character), who sang with the kind of youthful fervor which can so easily elude a tenor who is 40 or 50 years old. Showing no signs whatsoever of the usual stiffness one might encounter in a tenor making his role debut, Rojas ran, jumped and cavorted all over the stage like a love-sick puppy in pursuit of Adina. From his first stage entrance, he was secure in his character as well as his vocal production -- an exciting young talent who merits careful observation as his career takes wing. His rendition of Nemorino's big aria, "Una furtiva lagrima" (performed on the passarelle and almost in the audience's lap) was thrilling not only for its vocal warmth and solid technique, but for its dramatic conviction as well. 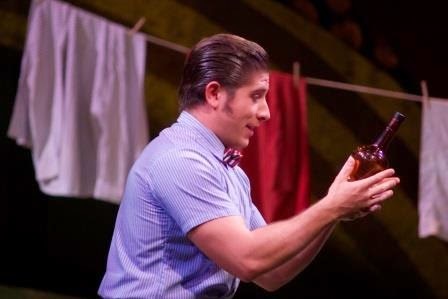 Mario Rojas as the lovesick Nemorino in a scene from
Donizetti's L'Elisire d'Amore (Photo by: Christian Pursell)

The young Mexican tenor's performance rested on such solid technique that it stole the show from a very capable soprano (Evan Kardon). In supporting roles, Daniel Cameron did some hilariously macho strutting and posturing as Belcore, Sergey Khalikulov was an amiable Dulcamara and Sabrina Romero had a nice solo as Adina's friend, Giannetta. Overall, the production values were much stronger than other operas I've seen staged at SFCM. One hopes this is a harbinger of more to come in the future. 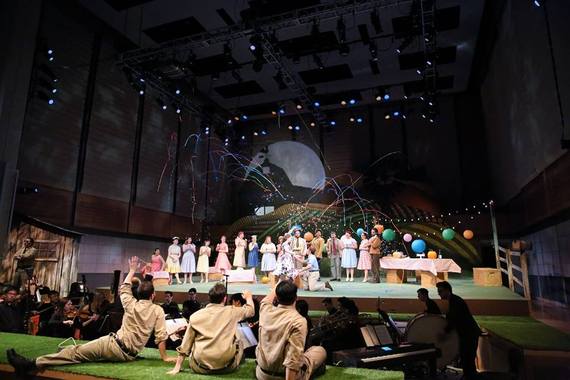 A scene from the San Francisco Conservatory of Music's
production of L'Elisir d'Amore (Photo by: Christian Pursell)

On January 30, 2011, as part of its Hidden Classics Reading Series, the Cutting Ball Theatre offered a reading of The Braggart Soldier, written by that ancient Roman master of comedy, Titus Maccius Plautus. As many fans of musical comedy are aware, Broadway's hit 1962 musical comedy, A Funny Thing Happened on the Way to the Forum, was based on three comedies by Plautus (Pseudolus, Miles Gloriosus and Mostellaria).

The reading I attended at Cutting Ball Theatre was directed by Evren Odcikin who was, no doubt, inspired by the fact that the title character in The Braggart Soldier (Capitano) became the first stock comedic character and would later make regular appearances in plays performed by the Commedia dell'arte. 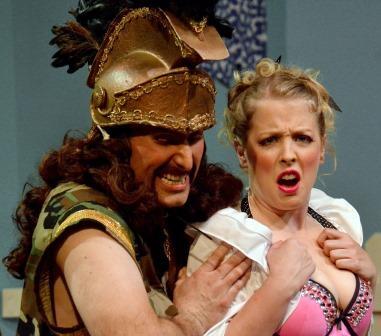 Kai Morrison and Eden Neuendorf in a scene from
The Braggart Soldier, or Major Blowhard (Photo by: Jay Yamada)

Odcikin has since reworked the original Plautus comedy into his own adaptation entitled The Braggart Soldier, or Major Blowhard and renamed its title character Major Topple d'Acropolis. Using a translation by Deena Berg, Odcikin (who designed an appealing unit set that could easily do double service as the scenery for a children's television show), greeted his audience with the following notice in the program:

"Permission granted to buy snacks and pee before the show begins. The vomitoriums are closed for retrofit, so please use your own bucket!" 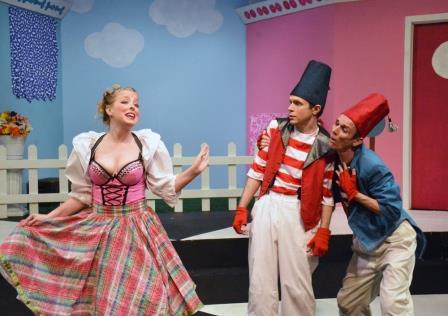 Eden Neuendorf, Matt Gunnison and Alan Coyne in a scene from
The Braggart Soldier, or Major Blowhard (Photo by: Jay Yamada)

Before I discuss Odcikin's production (which was presented by Custom Made Theatre), let me note that I was experiencing some postsurgical pain on opening night. I am extremely grateful to Custom Made's staff for enabling me to stand in the darkness when it became too uncomfortable for me to remain seated. 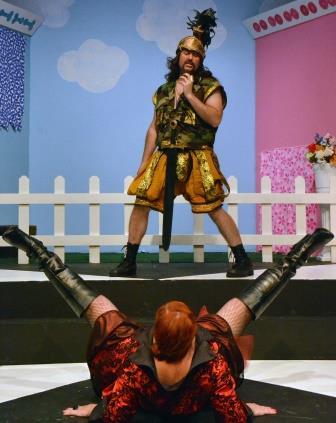 Kai Morrison and Catherine Leudtke in a scene from
The Braggart Soldier, or Major Blowhard (Photo by: Jay Yamada)

In Odcikin's adaptation, the wily slave (portrayed with great gusto by Alan Coyne) has been renamed Dexter and the dirty old man renamed Hospitalides (Jef Valentine). The two lovers are Nautikles (Darek Burkowski) and Convivia (Eden Neuendorf). Rounding out the cast are the domineering courtesan Climax (Catherine Leudtke) and hysterical slave, Haplus (Matt Gunnison). The fanciful costumes by Keiko Shimosato Carreiro add a great deal of whimsy to the production. 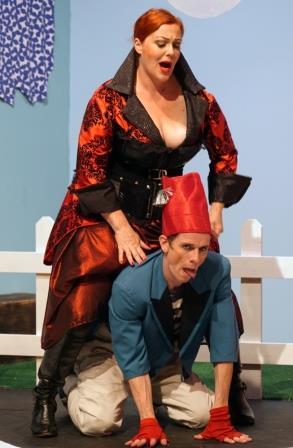 Climax (Catherine Leudtke) and Dexter (Alan Coyne) in
a scene from The Braggart Soldier, or Major Blowhard
(Photo by: Jay Yamada) 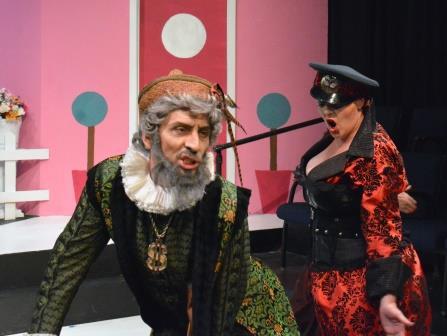 Jef Valentine and Catherine Leudtke in a scene from
The Braggart Soldier, or Major Blowhard (Photo by: Jay Yamada)

In attempting to apply a mashup of visual styles and sight gags to his adaptation, I'm afraid that Odcikin ended up with more of a mishmash. Some judicious pruning (especially in Dexter's long opening narrative) would have helped to tighten the show. Despite an enthusiastic cast (especially Alan Coyne) which delivered highly energetic performances, I noticed a lot of moments where comedic bits didn't land as well as one might have hoped and where, due to excessive narration, any sense of momentum in the storytelling or comedy evaporated into thin air. By the end of the evening, it felt as if Odcikin was struggling to tie things together and bring his adaptation to a happy finale. 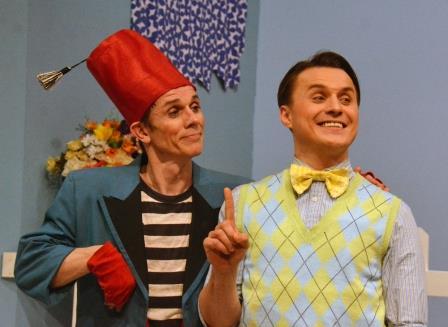 Alan Coyne and Darek Burkowski in a scene from
The Braggart Soldier, or Major Blowhard (Photo by: Jay Yamada)

The key to understanding this production's weaknesses might very well be generational. Half a century ago, when A Funny Thing Happened on the Way to the Forum opened on Broadway, one of its major assets was that most of the creative team (and many of its actors) were old enough to have worked in vaudeville or at least experienced the kind of low, bawdy comedy that was performed in the vaudeville and burlesque theatres of the early 20th century. Prior to the onset of the swinging Sixties, society's rampant sexual repression gave jokes about sexual taboos and gross bodily functions an added punch that bestowed plenty of vicarious thrills to the proceedings.

Today, not so much. A lot of Odcikin's shtick seems more solidly rooted in television and aimed at a younger audience that knows much more about human sexuality and can easily access pictures of people's buttholes and all manner of kink on their smartphones.

Sometimes less is most assuredly more. To my mind, the actor who kept stealing the show was Matt Gunnison, a gifted clown with a mischievous Howdy Doody-like appeal who can underplay any moment to perfection. 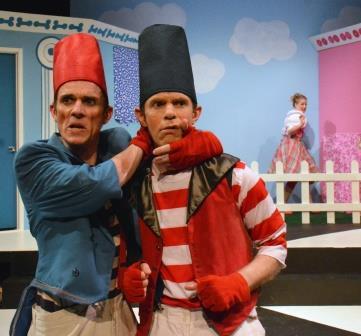 Alan Coyne and Matt Gunnison in a scene from
The Braggart Soldier, or Major Blowhard (Photo by: Jay Yamada)