ROYAL OAK, Mich. -- Mitt Romney, on the eve of what looks likely to be a close primary contest here with Rick Santorum, sought a badly needed jolt of momentum by appearing at a rally in a Detroit suburb with rock musician Kid Rock.

"The other day I got in my car and drove out to a home of a fellow who lives in this area, and I asked him whether he might come here tonight. I think you know him pretty well. He's a native son of Detroit. He loves Michigan, loves Detroit," Romney told a crowd of several hundred at the Royal Oak Music Theatre.

Romney introduced Rock, who is 41 and whose real name is Robert Ritchie, as "a guy who makes great music," and "a guy who introduces me by DVD everywhere I go," referring to the fact that the Romney campaign plays Kid Rock's song "Born Free" at most campaign rallies and events.

The velvet curtain opened to reveal Rock with a six-person band, in front of a massive American flag, who strummed an acoustic guitar and played a version of "Born Free."

As Kid Rock played, Romney stood in the front row of the audience with his wife Ann, clapping with his hands in the air at one point. After one song, Romney went on stage, shook hands with the musician, and thanked him. Kid Rock did not speak, and he and his band departed after the one song.

Romney thanked the crowd and predicted a "big victory" in Tuesday's primary election.

Romney, the former governor of Massachusetts, has edged ahead of Santorum, a former senator from Pennsylvania, in a few of the most recent polls of Michigan voters. However, Santorum led in two lesser-known polls released Monday. One Romney supporter, former state GOP chair Saul Anuzis, told BuzzFeed that Romney might not win as many votes as Santorum statewide, but still win more delegates.

The end result is that even if Romney wins here on Tuesday, the race will remain muddled. That is partly because Romney remains unable to light a spark with the GOP's conservative base. And so Romney's appearance with Kid Rock -- about as big a star as there is in the ranks of conservative celebrities -- was a welcome boost for the Romney campaign. 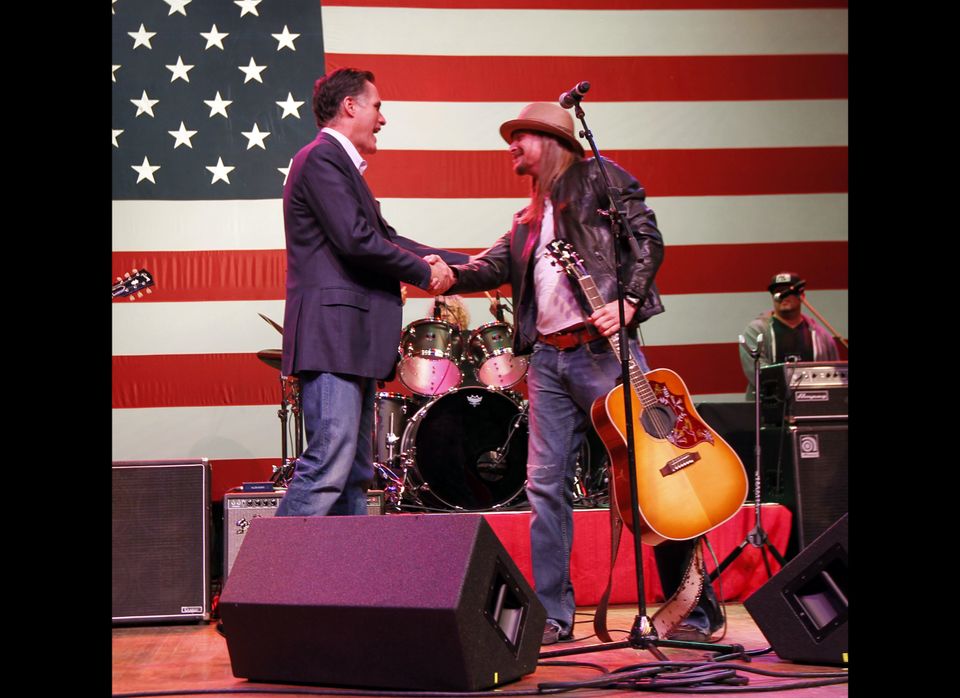