If cutting the national debt really is "a moral imperative," as the Romney campaign suggests, then their own plan might not be up to snuff.

Business Insider's Henry Blodget and Eric Platt published an analysis of the Republican presidential candidate's budget plan on Monday, and found that the national debt would exceed the size of the economy within a decade if the U.S. government implemented Romney's proposals.

That's not just cynicism. Even if the economy grows more quickly than is likely, the Romney budget would increase both the national debt and budget deficit, the report found. For example, the authors assumed no recessions would occur over the next ten years, an optimistic scenario in which the Romney plan would nevertheless increase the budget deficit and national debt.

Romney has already made a number of contradictory claims about his budget plan during the election season, which Business Insider sought to reconcile in their analysis. For example, he claims that he plans to slash all marginal tax rates by 20 percent while raising the same amount of tax revenue as before -- but as the Tax Policy Center and others have noted, this appears impossible without raising taxes on the middle class.

Romney also has not singled out any tax loopholes that he hopes to close as president, and claims that he will slash government spending by 18 percent, though he has not identified any government programs that he wants to eliminate.

The Republican presidential nominee has repeatedly blamed President Obama for the explosion in size of the national debt, while failing to note that the debt and deficit have grown mostly because of the recession -- not specific spending policies.

The below chart, courtesy of Business Insider, predicts changes in the national debt after the implementation of the Romney plan. The chart shows that the ratio of the national debt to GDP would likely exceed 100 percent by 2022: 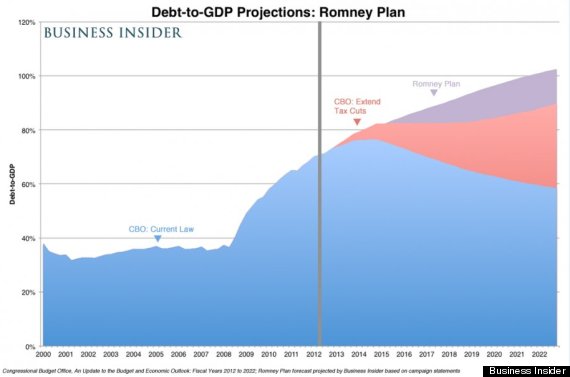