WASHINGTON -- Mitt Romney pushed back against a report that he had bullied a closeted gay classmate in prep school by insisting that the student's sexuality wasn't a factor because Romney couldn't have known or suspected it.

"First of all, I had no idea what that individual's sexual orientation might be," Romney told Fox News' Neil Cavuto Thursday afternoon, in response to a Washington Post story about his prankster days at the prestigious Cranbrook School. "Going back to the 1960s, that wasn't something we all discussed or considered. So that's simply just not accurate."

The former Massachusetts governor had used the same defense during an interview Thursday morning. He was trying to stress that the particular act of bullying wasn't discriminatory in nature.

"That was the furthest thing from my mind back in the 1960s," he said of the student's sexual orientation, during a sit-down on Fox host Brian Kilmeade's radio show.

Homosexuality was discussed less openly a half-century ago. Certainly it didn't engender the type of political debate it would in later decades. But the idea that it wasn't on people's minds in the 60s isn't true. The Huffington Post conducted a rudimentary search of newspaper archives from the era and came away with thousands of results, a sampling of which are below.

A March 14, 1961, letter to Ann Landers from a Detroit resident, asserting that he had stopped being gay with psychiatric treatment:

At 16 I realized something was "wrong" with me. Our family doctor, a wonderfully understanding man, persuaded my parents that I should have intensive psychiatric treatment. Today I am happily married and content. I was never the effeminate type so I was able to discuss the subject freely with other males. I learned that the men whose condemnation is most violent, the ones who are least tolerant of homosexuals, are not quite sure of their own masculinity. 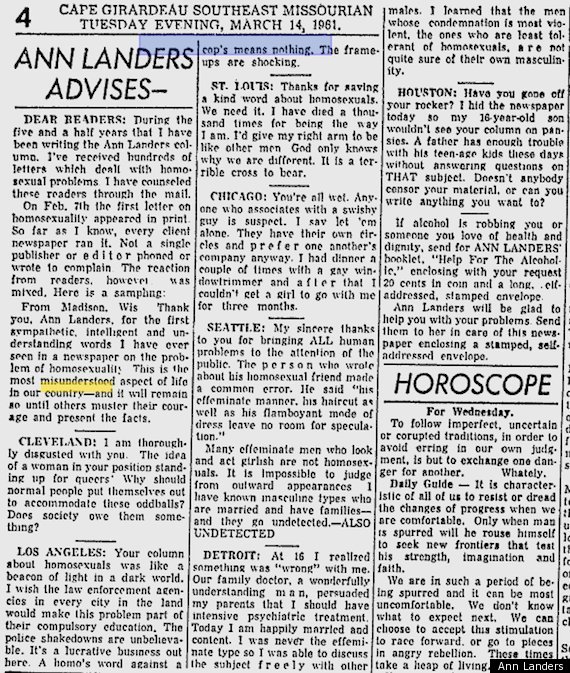 An Oct. 19, 1964, column by Drew Pearson on homosexuality being something that afflicted Republicans and Democrats alike:

The story of homosexuality in Washington is a tragic one and has hit both Democratic and Republican administrations. It's a disease which is completely bipartisan and has no respect for people in high places. 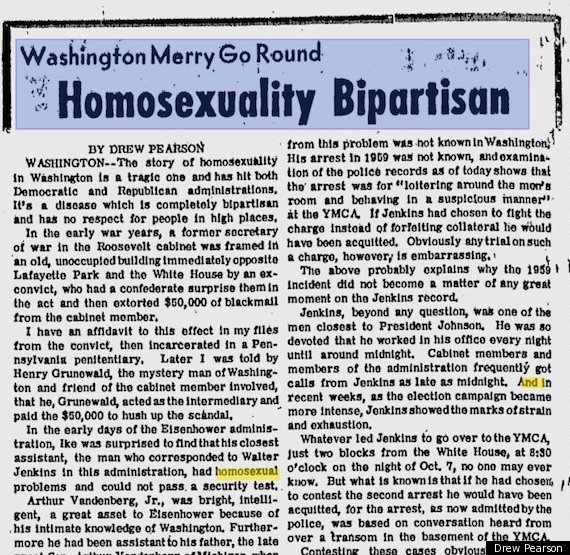 An April 17, 1966, New York Times article about efforts to allow homosexuals to serve in the armed forces:

LOS ANGELES, April 16 A national campaign to end the exclusion of homosexuals from the armed forces was set in motion here this week.

A May 2, 1967, piece on a group at Columbia University protesting for gay rights:

Columbia University has issued a charter to a student group that seeks equal rights for homosexuals.

The organization, called the Student Homophile League, is reported to have about a dozen members, both homosexuals and heterosexual.

A Nov. 1, 1967, article on then-Gov. Ronald Reagan of California reacting to accusations that his administration included homosexuals:

Gov. Ronald Reagan Tuesday angrily denied as scurrilous a report by columnist Drew Pearson that a homosexual ring had been uncovered in his administration.

"There is no truth to the report," Reagan told a news conference. At one point, he lost his temper and pounded the podium to emphasize the denial. 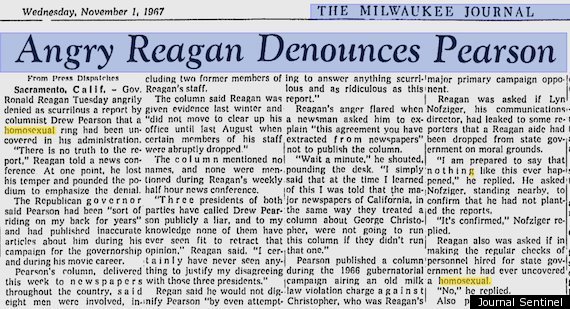 A Jan. 6, 1968, UPI article on a campaign being launched for acceptance of gay individuals:

Homosexuals are waging a militant campaign for acceptance of their way of live as a normal condition, like being left-handed.

Their hopes for changing public attitudes would be greatly enhanced if they could get churches on their side. Recently they seem to have made substantial progress in that direction. 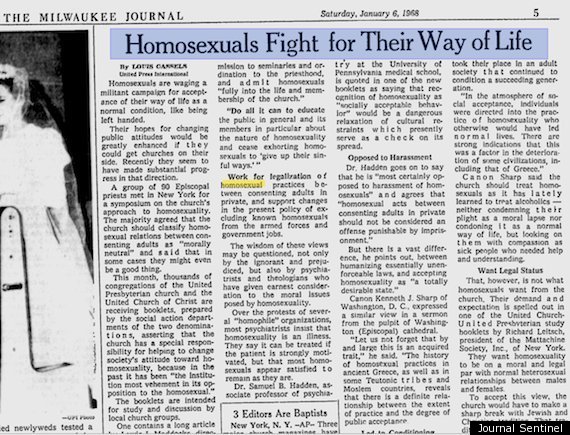 A majority of American doctors questioned in a poll say that a pregnant woman should be able to have an abortion if she asks for one.

Most also said that discreet homosexual acts between consenting adults should be permitted without legal restrictions. 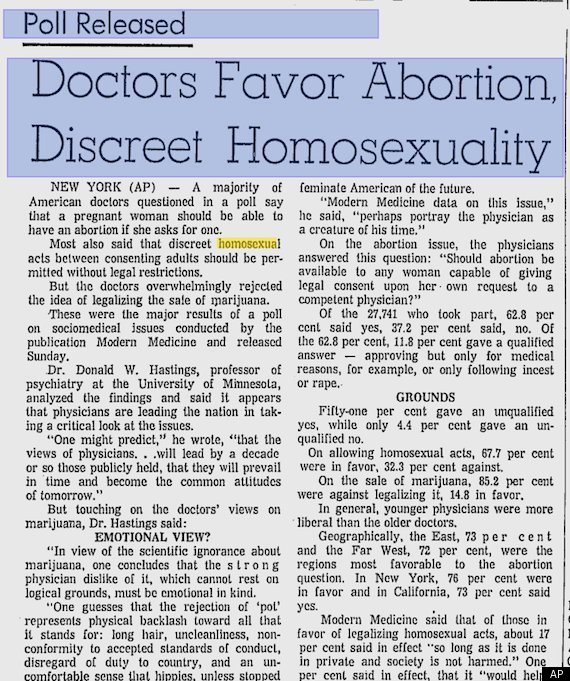