Over the past 32 years, speeches by Republican candidates accepting their party's nomination for president have differed in length, theme and tone. But even among these differences, Mitt Romney's speech last night stands out. For one thing, it had 41 percent fewer applause breaks compared to speeches by Romney's previous five predecessors:

Granted, it was the shortest speech given by a Republican nominee since 1980, with just 4,089 words. The average speech given since 1980 had 4,707 words. But still, George W. Bush's speech as a challenger in 2000 had 0.6 percent more words than Romney's speech, but Bush got 65 percent more applause breaks.

The average length of Republican nominees' speeches also tended to be longer than Romney's because of the number of incumbent Republican presidents during the past 32 years. Incumbents gave nomination acceptance speeches in 1984 (Ronald Reagan), 1992 (George H.W. Bush) and 2004 (George W. Bush), and it turns out that incumbent presidents like to talk longer -- 436 words longer, in fact. 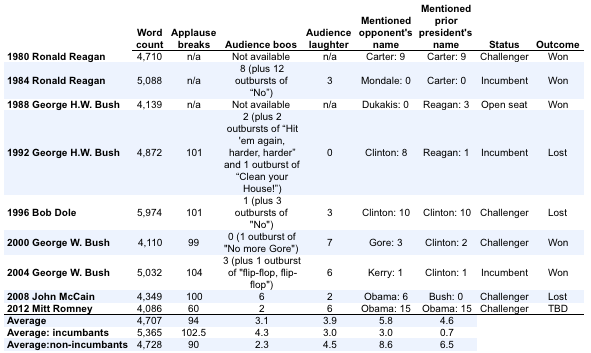 Romney's speech differed from his predecessors' in other ways as well. He mentioned his opponent's name far more frequently, uttering President Barack Obama's name 15 times (although two of these were "Obamacare" references). The closest any other Republican nominees came to that figure was Bob Dole in 1996 who mentioned Bill Clinton's name 10 times, and Ronald Reagan in 1980 who mentioned Jimmy Carter's name nine times. In general, non-incumbents tended to mention their opponent's name more often (8.6 times on average) compared to sitting presidents (3 times on average). But still, Romney's frequent mention of Obama was a bit of an outlier. 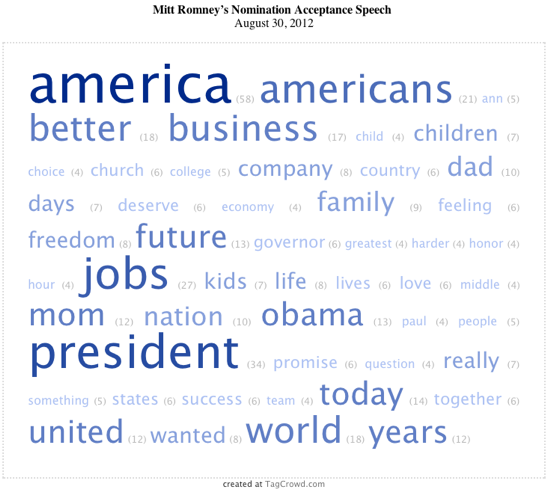 Looking at the text of nominees' speeches between 1980 and 2012, Romney's biographical emphasis was most similar in tone to Sen. Bob Dole's speech in 1996. Frequency analysis of the words from both speeches show a high number of familial terms like child, children, church, dad, father, family, kids, mom. While Romney touched on policy issues, the references were brief, with the exception of a high number of references to business and jobs.

The two Bush presidents managed to cover both ends of the personal ←→ policy spectrum. In their first acceptance speeches, George H. W. Bush (1988) and George W. Bush (2000) both emphasized their values. Their subsequent speeches (1992 and 2004, respectively), however, were very policy-focused.

It should also be noted that George W. Bush's second speech in 2004 and John McCain's speech in 2008 reflected the spirit of a country at war, an emphasis completely absent from Mitt Romney's speech.

Word clouds show the 50 words most frequently used by each of the nominated Republican presidential candidates at their respective conventions from 1980 through 2012. Visualizations were generated using TagCrowd.com.