WASHINGTON -- The race for the hearts and minds of local activists in the early Republican primary states remains up for grabs. Mitt Romney may be the overwhelming favorite of the most powerful Republican insiders, but his hold on grassroots advocates appears more tenuous. That's the message of the latest Power Outsiders survey conducted by The Huffington Post and Patch.

Two-thirds of the influential local Republicans we surveyed in the early primary and caucus states have not yet publicly endorsed a candidate for president. Romney currently leads in terms of potential support, but both Herman Cain and Newt Gingrich have almost as much appeal, and Rick Perry matches Romney in public endorsements from our survey respondents.

The Power Outsider surveys were inspired by academic research showing that endorsements by party "actors" at all levels -- officeholders, party officials and local activists -- are a critical leading indicator of who will become the presidential nominee. More specifically, in their book "The Party Decides," political scientists Marty Cohen, David Karol, Hans Noel and John Zaller found that a candidate's share of endorsements just before early primary elections is often a better predictor of the ultimate nominee than early polls are.

But national and statewide officeholders are just part of the story. The political scientists also base their conclusions on endorsements and decision making at the grassroots level, and that's where our Power Outsiders surveys come in. This week, we asked specifically about endorsements and support, and heard from 172 respondents in the early primary and caucus states, including 47 in Iowa, 51 in New Hampshire, 61 in South Carolina and 13 in Florida.

Slightly less than one-third of the Power Outsiders (31 percent) say they have publicly endorsed a Republican candidate for president. 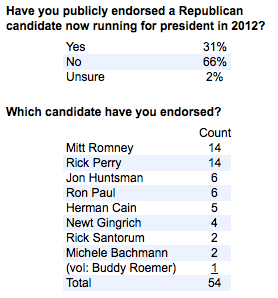 Why have so few of the Power Outsiders publicly endorsed a candidate? A small number (23 percent) say their office requires that they remain publicly neutral. Nearly two-thirds of those who haven't publicly endorsed say that they haven't made up their mind about which candidate to support (40 percent) or are leaning toward one candidate but don't feel comfortable making a public endorsement yet (25 percent). 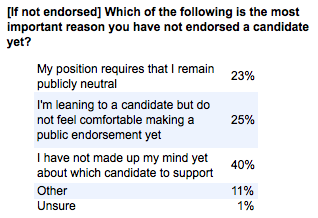 The candidate standings look very different, however, when we ask the publicly uncommitted which way they're leaning. The chart below combines those who have endorsed each candidate with those who are leaning to support that candidate. 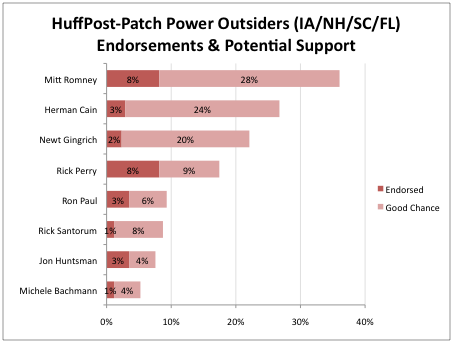 Romney leads the field in combined endorsements and potential support. More than one-third of the Power Outsiders (36 percent) have either endorsed Romney or say there is a "good chance" they will support him -- more than twice as many as say the same about Perry (17 percent). In fact, on the same measure of endorsements plus potential support, Perry also runs behind both Cain (27 percent) and Gingrich (22 percent).

The Power Outsiders survey also asked respondents how likely it was that they would support each candidate -- good chance, some chance, no chance or unsure. The results show that Romney is the frontrunner among local party actors but still far from the consensus choice. Several candidates -- including Cain, Gingrich and, to a lesser extent, Perry -- remain within striking distance in terms of potential support. As the field narrows, any of these candidates could still emerge as the presidential nominee.

With just nine weeks before the Iowa Caucuses, the influential GOP Power Outsiders remain very much open to persuasion.

Our surveys are not a scientific random sample of any larger population but rather an effort to listen to a swath of influential, local Republican activists, party leaders and elected officials in Iowa, New Hampshire, South Carolina and Florida. All of the individuals listed below have agreed to participate in the surveys, although not all responded to this week's questions. Interviews were conducted between Oct. 28 and Nov. 1, 2011.

The slideshow below shows how GOP Power Outsiders have reacted to the Republican presidential candidates over the course of the race: 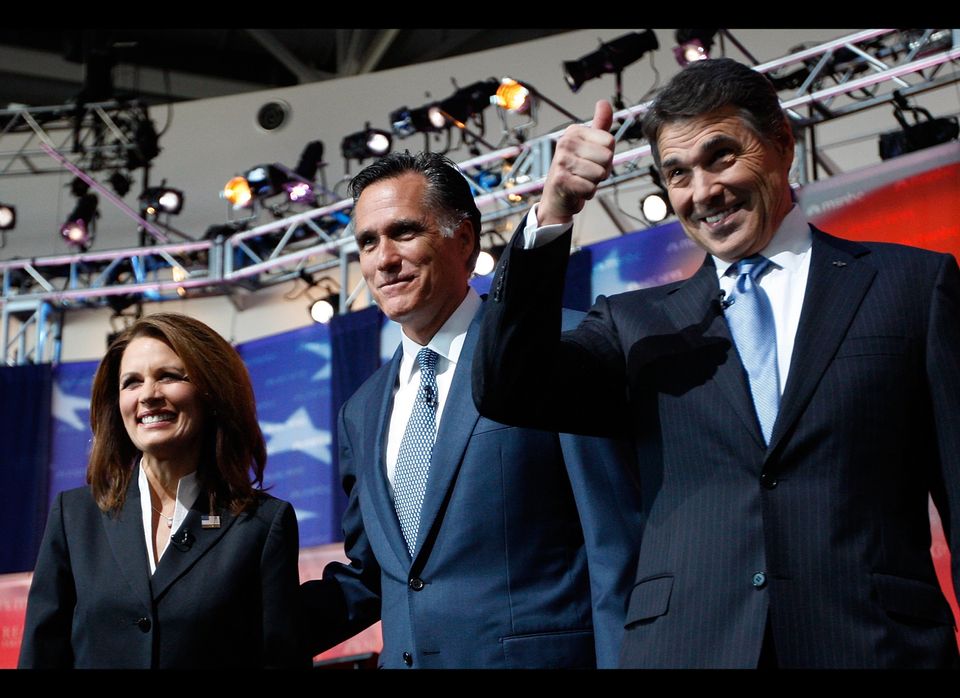