WASHINGTON -- Mitt Romney has not closed the gender gap in the final days before the election, despite recent reports that President Barack Obama no longer holds an advantage among women.

Polling released in the week following the first presidential debate indeed found Romney gaining among both men and women, but little evidence supports the notion that the Republican presidential nominee has erased the gender gap or sustained that post-debate surge with women voters.

One of the initial polls to indicate a significant shift of women voters in Romney’s direction -- a survey often cited by those arguing that the gender gap has been closed -- was conducted by the Pew Research Center immediately after the first debate. Pew found:

While shifts are evident across many demographic groups, there has been a notable change among women voters: In September, just 42% viewed Romney favorably, while 60% had positive impressions of Obama. Today, about half view each of the candidates favorably (51% Obama, 48% Romney).

Michael Dimock, associate director at the Pew Research Center, told The Huffington Post that the poll reflected “a moment in the campaign where [Romney] overcame a lot of negatives.”

“That poll we conducted right after the first debate suggested that his debate performance did have an impact on the race, and that impact was probably more substantial among women than it was among men,” Dimock said. He added that Romney had “a lot more ground to make up” among women given the negative tone of the Republican primary race, the Obama campaign’s effectiveness in portraying him as out of touch, and his own comments about the 47 percent.

Nonetheless, Dimock said, “The entirety of the polling over the course of this year suggests to me that the gender gap is likely to look very similar to the last few election cycles, with women somewhere between 6 and 8 points to favor Obama, and fairly consistent with where we've been since 1980.”

On Monday, a fresh Pew poll mirrored Dimock’s prediction. With just eight days remaining before the election, the survey found that 50 percent of likely women voters favor Obama, as opposed to 44 percent who favor Romney.

Measuring the gender gap, and especially changes in the margin of support for each candidate, is a particularly perilous task for pollsters.

Calculating gender differences in the vote for one presidential candidate could involve just two numbers: the percentages supporting, say, Obama among men and women. Because the subgroups of men and women are each half the sample, the margin of error for each percentage is going to be at least plus- or minus-5 points.

But most reports on the gender gap compare the margins separating Obama and Romney, a comparison that involves four different numbers, and when looking at changes in this gap over time, the comparison expands to eight. Compare all of those poll estimates, all with the potential to vary plus- or minus-5 percent, and you get a lot of random noise.

That's just what happened on seven different surveys examined by The Huffington Post. The polls before and after the first debate showed everything from a 6 percentage point gain in Obama's margin over Romney among women to a 16-point decline, and everything from an 8-point gain in Obama's margin among men to a 14-point decline. 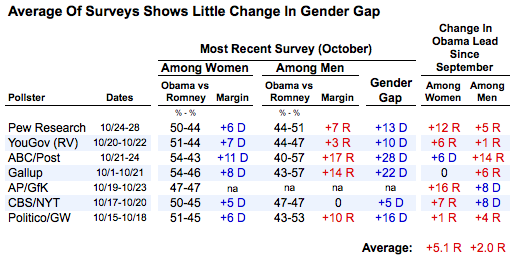 If we average the changes across the seven surveys, we find a slightly bigger decline in Obama's margin among women (minus 5 points) than among men (minus 2 points), but a 3-point difference given all the potential for random noise amounts to not very much.

While the gender gap in voting is narrow compared to other social divides, such as class and race or ethnicity, both campaigns and the media are aware that women -- who in recent history have exceeded men in voter turnout -- could play a critical role in this election, as they did in 1996.

Margie Omero, founder of Democratic public opinion research firm Momentum Analysis LLC, said the gender gap has been fairly consistent throughout the race, and it would be incorrect to point to it in reports about Romney’s so-called momentum.

“There was a tightening for both men and women after that first debate,” Omero said. “But there's not something happening just with women that has caused the gender gap to just disappear.”

“The press wants to cover things moving around,” she added. “Someone floats the idea of a Romney surge, and then there's a bunch of stories about the Romney surge, and I don't think that has anything to do with the gender gap.”

Corrine McConnaughy, a political scientist at Ohio State University, argued that not only has the gender gap not been closed, but it is too late for Romney to do so. "Compassion politics" drives women voters, McConnaughy said, and she finds it unlikely that the GOP nominee can suddenly convince middle class women that he is compassionate or empathetic enough, despite a noticeable shift in his tone over the last month.

“At this point in the campaign, we're switching from who are going to line up with you to getting your supporters to turn out,” McConnaughy said. “He didn't start running that compassionate strategy until it was probably too late. Too many people have already made up their minds.”

Asked how the Republican Party’s struggles with women’s health issues and abortion -- highlighted yet again last week by Indiana Senate candidate Richard Mourdock’s comments on rape -- could factor into Romney’s fate, McConnaughy said it’s “really hard to parse” individual issues, but added that “it’s not helping Romney that he's having to deal with headlines about uncompassionate Republicans.”

Omero, too, said it would be difficult to project the impact of a single issue on the outcome of the race, calling it an “oversimplification” to imply that women would vote on abortion alone. But the controversy over multiple candidates' remarks “just reinforces a sense with some women that one party doesn't really get it, and one party does,” she said.

Like Dimock, Omero predicted that women will continue to lean in Obama’s favor.

“There will be a gender gap on Election Day,” she said confidently. “Obama has, and will continue to have, an advantage with women.”