Romney was diagnosed today with lead poisoning. He came down with the rare disease as a result of kissing Trump's ring at a recent Thanksgiving week dinner. 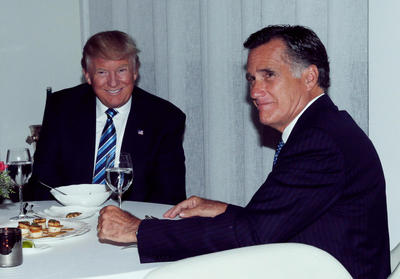 At the dinner, Romney groveled before our Future Glorious Ruler(TM) trying to land the coveted Secretariat of State. He pulled up lame when Exxon CEO Rex Tillerson got the nod.

"I told him not to go," his wife Ann said. "But no, he had to suck up to Donald Trump and be Secretary of State. How well did that turn out?" she asked.

At a hospital press conference, Dr. Melville Hermanski explained, "Lead poisoning can be contracted through the lips. Of course, this wouldn't have happened if Trump's ring was a genuine gold ring."

Metallurgists who have examined close up pictures of the ring detected brush marks in the gold, and a small engraving on the inside of the band "To DT from VP." It is not known whether VP refers to a title or a person.

"Anyone who listened to the campaign," his wife retorted.