WASHINGTON -- Four new polls released over the weekend continue to show Mitt Romney heading for a comfortable victory in Tuesday's New Hampshire primary, with some uncertainty remaining about the ultimate size of that margin and the race for second through fifth place. All four polls show increasing support for former Utah Gov. Jon Huntsman, with some suggesting that Huntsman might close in on Rep. Ron Paul (R-Texas) for second place.

The four new surveys differed in their methods and timing, and perhaps as a result, showed slightly varying levels of support for former Massachusetts Gov. Romney. The polls -- conducted by the University of New Hampshire and WMUR; Suffolk University and 7News; the Democratic Party-affiliated firm Public Policy Polling and the American Research Group -- estimated Romney's support between 35 and 41 percent of the likely primary voter. They also gave him leads over his nearest competitors ranging from 15 to 24 percentage points.

The two polls that tracked opinions over the course of the week showed slight declines for Romney. Romney was down two and five points respectively on the University of New Hampshire and Suffolk University surveys, compared to surveys conducted earlier in the week. 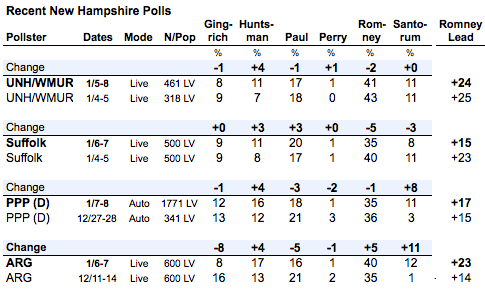 All four polls measured upticks of 3 to 4 percentage points for Huntsman, the one candidate showing late momentum, though the three most recent surveys still put Huntsman in third place behind Paul. The tracking polls also indicate no further gains for former Sen. Rick Santorumn (R-Pa.), whose support had increased significantly in the immediate aftermath of his virtual tie with Romney in the Iowa caucuses last week.

The chart below, featuring the HuffPost Pollster trend lines based on all public polls in New Hampshire, shows support for Romney (at 39.3 percent) and Paul (at 18.1 percent) dipping slightly, while Huntsman's vote clicks up more than three points (to 12.6 percent), nudging him slightly ahead of Santorum (11.4 percent) and former House Speaker Newt Gingrich (8.2 percent). 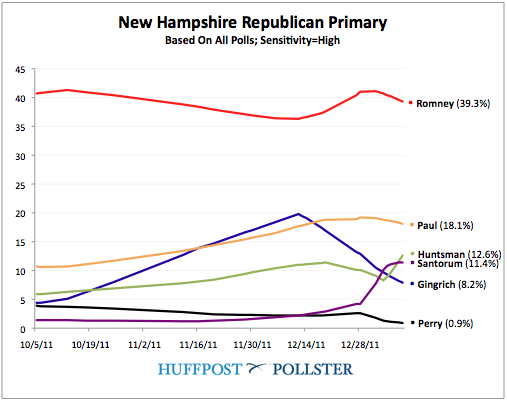 As reported by The Huffington Post's Paul Blumenthal, the late movement to Huntsman results in part from a total of $1.25 million in television advertising in the Boston media market purchased over the course of the campaign by Our Destiny, a super PAC backing Huntsman. The other big purchasers of television advertising in New Hampshire include Romney and Paul, whose campaigns spent just under $1 million and $1.14 million respectively on ads in the Boston market. In contrast, the campaigns of Santorum and Gingrich and their affiliated super PACs have spent only token amounts on New Hampshire advertising.

The surveys also yield evidence of continuing uncertainty among New Hampshire's notoriously late-deciding voters, although most were leaning to one of the candidates over the final weekend. For example, the University of New Hampshire survey finds less than half of the likely primary voters saying they had "definitely decided" which candidate to support with 29 percent saying they were "still trying to decide" (although only about a quarter of these uncertain voters, or 8 percent overall, were still completely undecided).

Similarly, the Suffolk University tracking poll found 15 percent of likely primary voters to be completely undecided, with another quarter of the electorate saying it was very likely (4 percent) or somewhat likely (21 percent) that they might change their minds.

As Andrew Smith, director of the UNH Survey Center, said in their press release, the reported uncertainty means that "all of the candidates behind Romney have a good chance finishing anywhere between second and fifth place," although the task "will be harder for Gingrich and Santorum as they are not running ads in the campaign's final days."

The Suffolk University poll has picked up a steady decline in Romney's support, from a high of 43 percent a week ago to 33 percent now. The UNH and WMUR poll is the only other media poll that has been in the field more than once over the last week. That survey shows only a two-point decline in Romney's support, which it estimates at 41 percent of likely primary voters.