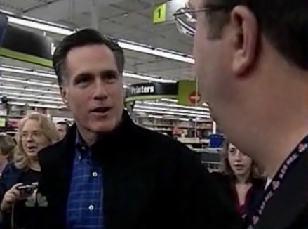 Quick note here on the now-infamous Mitt Romney-Glen Johnson standoff video that made the rounds yesterday — it's now a top draw on each of the three news nets (on the net). The Romney video is the first AND second most-watched video on the NBC/MSNBC video site (first goes to Contessa Brewer introducing it yesterday afternoon, second goes to Brian Williams advancing the story with some more footage on Nightly). Meanwhile on CBS it's the second-most watched vid, coming after the top-ranked "Cruise Scientology Tape Leaked" and on ABC News, which steered way clear of it on GMA this week but is featuring it on 20/20 this evening — and the teaser clip is already #1 on the site. Interestingly, it doesn't make the cut for CNN or Fox News top videos.

In other news, I still think that Johnson went over the line in his challenge to Romney. But the next time I'm looking for something to go viral, he's hired!