WASHINGTON -- Although he appears headed to victory in Saturday's South Carolina primary, Newt Gingrich faces skepticism from grassroots Republican activists and officeholders, who increasingly prefer Mitt Romney as their first choice for the Republican presidential nomination. That's the main finding from the latest Power Outsiders survey in the early primary and caucus states and beyond.

The Huffington Post-Patch Power Outsiders surveys conducted since August have been an effort to reach out to local Republican activists, party officials and officeholders to observe the so-called "invisible primary" for endorsements, campaign cash and activist support that occurs in the months leading up to the early primaries and caucuses.

Scholars who have studied past campaigns find that party actors at all levels are not only a critical leading indicator of who will become the presidential nominee, but often a better predictor of the ultimate nominee than early polls. This past week we interviewed 177 individuals from the early primary and caucus states -- 46 in Iowa, 58 in New Hampshire, 61 in South Carolina and 12 in Florida -- to check in one last time before the campaign moves on to the later contests.

We have asked the Power Outsiders about their personal presidential preference five times since early December, and our surveys have tracked steady growth in support for Romney. In early December, the party actors we interviewed were split almost evenly between Gingrich (27 percent) and Romney (26 percent), but Romney has risen in each survey. Although Gingrich's support has increased again over the last week after falling off slightly during December, the early-state Power Outsiders now prefer Romney to Gingrich by a 43 to 27 percent margin, followed by Rick Santorum (14 percent) and Ron Paul (9 percent). 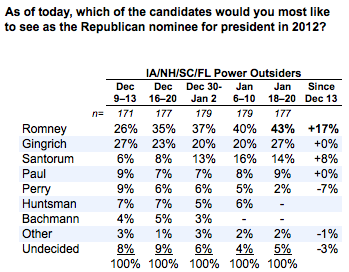 As the academic research might have predicted, Romney's rise on our Power Outsider surveys in early December turned out to be a leading indicator of growing support for Romney nationally.

Although we saw an 11-point increase in his support among the local party actors in the early states before the Iowa caucuses, Romney's support among all Republicans nationwide remained essentially flat during December, according to the Gallup Daily tracking poll. 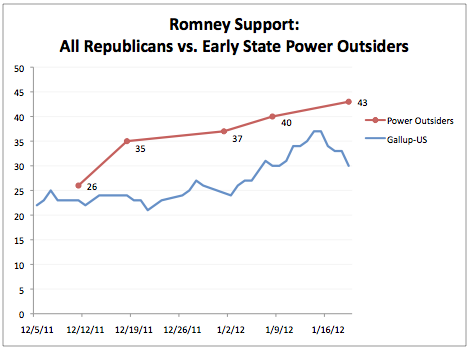 Romney's support started to pick up nationally after his strong performance in Iowa and victory in New Hampshire. Note that although Gingrich regained some support among the Power Outsiders in the past two weeks, their support for Romney remained intact, even as his national poll numbers have started to decline.

However, the preference for Romney is not uniform. Not surprisingly, he continues to receive the most backing in New Hampshire (62 percent), the state that gave him a lopsided primary victory two weeks ago, and is preferred by a near majority (46 percent) in Iowa. 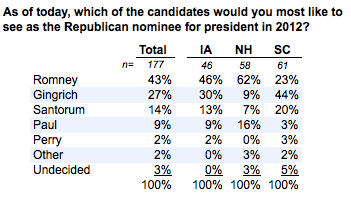 South Carolina is a different story. The roughly 60 Power Outsiders there whom we have interviewed each week have been divided between Gingrich, Romney and Santorum in recent weeks. From mid-December to early January, 17 or 18 respondents each week (or about 30 percent) continued to favor Gingrich. Over the past two weeks, Gingrich picked up 10 supporters in our sample and now leads Romney in South Carolina by the widest margin yet (44 to 23 percent), with Santorum the choice of most of the rest (20 percent).

Of course, these were just the first three primary and caucus states. Now that the nomination battle is moving on, what about local Republican Party actors elsewhere? To try to get a better read, we asked Patch editors nationwide to find prominent Republican elected officials (past or present) or party officials in their coverage areas to participate in our Power Outsider survey. This week, we interviewed 139 respondents from another 15 states.

We caution that our surveys are not scientific, representative samples of Republican officeholders and, perhaps more important, that Patch websites do not cover random cross-sections of the United States. Patch sites typically cover suburban areas, and this first wave of interviews skews heavily to the Northeast states, with just over half the interviews coming from Massachusetts (26), Connecticut (17), New Jersey (15), New York (11), Pennsylvania (4) and Rhode Island (5). The rest were mainly in the Midwest and South, including Georgia (14), Michigan (9), Maryland (7), Missouri (5), Ohio (5), Illinois (4), Minnesota (4) and Virginia (1) -- plus 12 interviews in California (12). 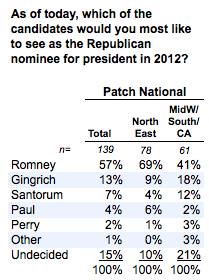 Not surprisingly, Romney is very strong among our respondents in the Northeast states, where our Power Outsiders favored him over Gingrich 69 to 9 percent, with all other candidates in single digits. Among the other respondents -- again, mostly in the Midwest and South -- Romney has less support (41 percent) but is still preferred to Gingrich (18 percent) and Santorum (12 percent) by wide margins.

Romney's support among these local party actors is likely to grow if the contest narrows to a choice between Gingrich and him. We asked both of our Power Outsider groups about their preferences on a series of one-on-one match-ups of Romney against each of the remaining Republican candidates. As the following table shows, Romney runs well ahead of all three candidates among both Power Outsider groups, although that advantage is narrowest when our early caucus and primary state respondents are choosing between Romney and Gingrich (48 to 42 percent). 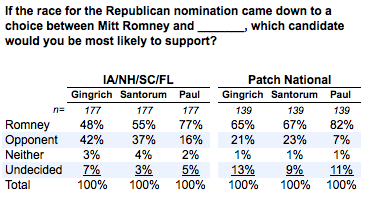 A closer look at the Romney-Gingrich match-up shows considerable variation by state and region. Romney is widely preferred to Gingrich among party actors in New Hampshire (62 to 24 percent) and the other Northeast states (77 to 13 percent), but his advantage is narrower in the rest of the Patch national sample (49 to 31 percent). Gingrich does best among our Power Outsider respondents in Iowa, where he ties Romney (46 percent each), and in South Carolina, where the local party actors choose Gingrich by a nearly two-to-one margin (61 to 33 percent). 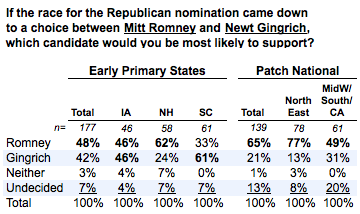 All of this suggests that Gingrich may have the support of local party actors in a handful of Southern states and perhaps among more rural Republican areas not well represented in our sample, but will face a wall of resistance from the local Republican establishments in the Northeast and an uphill climb among party actors elsewhere.

An even tougher challenge may be the presumption of inevitability now surrounding Romney. When we asked which of the candidates is most likely to win the GOP nomination, the overwhelming majority of our respondents choose Romney -- 64 percent of the Power Outsiders in the early primary and caucus states, and 81 percent of the Patch national sample.

The South Carolina results may dent that perception, but taken together, these results put the state of the Republican race into context. If Gingrich is going to overtake Romney to win the GOP nomination, he still has to build support from the ground up. Even at the local level, party insiders mostly prefer Romney.

Our surveys are not a scientific random sample of any larger population but rather an effort to listen to a swath of influential local Republican activists, party leaders and elected officials in Iowa, New Hampshire, South Carolina and Florida. All of the individuals listed below have agreed to participate in the surveys, although not all responded to this week's questions. Interviews were conducted between Jan. 18 and Jan. 19, 2012.