With less than three weeks remaining before the Iowa caucuses, local Republican activists in the early primary and caucus states are still far from reaching consensus on their preferred presidential nominee.

While Mitt Romney and Newt Gingrich stand out as favorites, the majority of local party insiders have not offered a public endorsement of any candidate, according to the latest Power Outsiders survey conducted by The Huffington Post and Patch. More than one-third (37 percent) either are undecided, are unsure how certain they are, or could still change their minds about which candidate they plan to support.

The Power Outsider surveys were inspired by academic research showing that endorsements by party "actors" at all levels -- officeholders, party officials and local activists -- are a critical leading indicator of who will become the presidential nominee. In their book "The Party Decides," political scientists Marty Cohen, David Karol, Hans Noel and John Zaller found that a candidate's share of endorsements just before the first primary elections is often a better predictor of the ultimate nominee than early polls are.

Although Cohen and his colleagues examined newsworthy endorsements at all levels, from governors and U.S. senators to lower-level elected officials and party leaders at the grassroots, our Power Outsiders surveys have focused on local Republican Party actors in the early primary and caucus states. This week, we updated a previous survey on endorsements and support conducted in early November. We interviewed 171 respondents, including 41 in Iowa, 59 in New Hampshire, 58 in South Carolina and 13 in Florida.

Most of these local party activists have still not endorsed a presidential candidate. The number who have made an endorsement has increased, but only slightly, from 31 to 36 percent since we last asked in November. 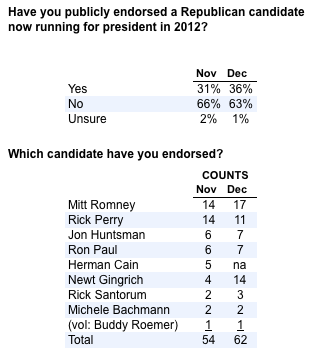 Within this universe, Mitt Romney has a slight edge with 17 public endorsements, followed by Gingrich with 14 (he had only four last month), Rick Perry (11), Jon Huntsman (7), Ron Paul (7), Rick Santorum (3), Michele Bachmann (2) and Buddy Roemer (1).

Whether they've shared it publicly or not, most of the local activists have a first choice, but no single candidate currently dominates. Combining public endorsements and private support shows Gingrich and Romney clearly in the lead (with 27 and 26 percent, respectively), followed by Paul (9 percent), Perry (9 percent), Huntsman (7 percent), Santorum (6 percent) and Bachmann (4 percent). 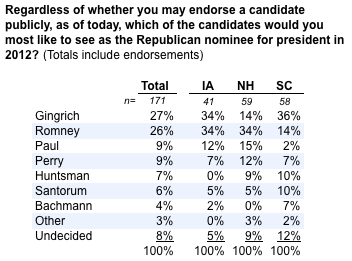 Not surprisingly, Romney has a big advantage among the local activists in New Hampshire (34 to 14 percent), while Gingrich holds a similar lead in South Carolina (36 to 14 percent). But the Power Outsiders in Iowa divide evenly between the two frontrunners (34 percent for each).

Much like rank-and-file Republican voters, many of these local activists also tell us that they are not dedicated to their current choice. Specifically, more than one-third are totally undecided (8 percent), say on a follow-up question that they may still change their mind about which candidate they will support (27 percent), or are unsure how certain they are (2 percent). 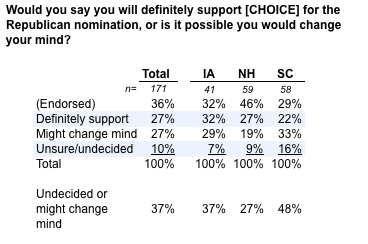 When the survey participants are asked about each candidate separately, the patterns of support are similar, although they have changed since early November. Where Romney previously led Gingrich and the rest of the field in combined endorsements and potential support, the two frontrunners are now closely matched. 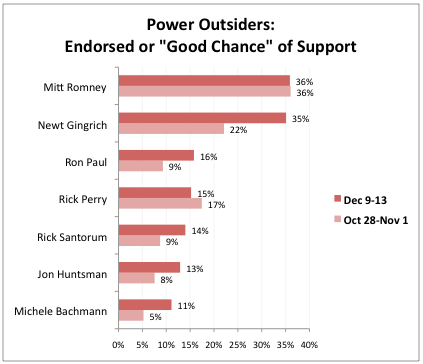 For Newt Gingrich, these results counter the notion that the Republican establishment stands as an obstacle to his nomination, at least at the local level. Gingrich appears to face more skepticism among Washington insiders, but only 11 percent of our Power Outsiders say there is "no chance" they could support him.

On the other hand, these results also offer encouraging news for Mitt Romney. First, while Romney is doing no better at winning over these activists than Gingrich is, he is also doing no worse. Only 12 percent of our Power Outsiders rule out the possibility of supporting Romney.

Second, support for Romney among the local activists is far more solid than support for Gingrich. More than three-quarters (77 percent) of the Power Outsiders currently supporting Romney have publicly endorsed him or say they will definitely support him. Among Gingrich supporters, just 50 percent have endorsed or are certain they will support him. If Gingrich's rating plummets among ordinary voters, his backing from local insiders will likely fall with it.

So with just a few weeks remaining before the "invisible primary" comes to a close and the real choosing begins, this is clear: At the local level in the early primary and caucus states, the Republican Party has not decided.

Our surveys are not a scientific random sample of any larger population but rather an effort to listen to a swath of influential local Republican activists, party leaders and elected officials in Iowa, New Hampshire, South Carolina and Florida. All of the individuals listed below have agreed to participate in the surveys, although not all responded to this week's questions. Interviews were conducted between Dec. 9 and Dec. 13, 2011.