Speaking at the NRA national convention in St. Louis on Friday, likely GOP presidential nominee Mitt Romney warned that re-electing President Barack Obama would lead to an "unrestrained" assault on freedom with decades of repercussions.

Romney, whose record on gun rights is hardly rock-ribbed, tried to convince a skeptical audience that he would fight for its interests upon entering the Oval Office.

As governor of Massachusetts, Romney in 2004 extended the state's ban on assault weapons and small handguns. Less than a year later, however, he designated May 7 "Rights to Bear Arms" day in Massachusetts and became a lifetime member of the NRA.

"The right to bear arms is so plainly stated, so unambiguous, that liberals have a hard time challenging it directly. Instead, they’ve been employing every imaginable ploy to restrict it," Romney said.

After citing Obama's proposal to let the Bush tax cuts expire as an "assault on economic freedom," Romney heavily implied that if re-elected, Obama would commandeer the courts to eliminate gun rights.

"President Obama seems to believe that court decisions are only legitimate when they rule in his favor, and illegitimate if they don’t. He thinks our nation’s highest court is to be revered and respected -– as long as it remains faithful to the original intent of Barack Obama."

Romney was referring to broad comments the president made early last week in reference to the health-care cases now before the U.S. Supreme Court that were construed as his rejecting the power of judicial review. "I am confident that the Supreme Court will not take what would be an unprecedented, extraordinary step of overturning a law that was passed by a strong majority of a democratically elected Congress,” Obama said.

The next day, the president clarified his statement and explained that he did believe in judicial review. Attorney General Eric Holder reaffirmed that belief in a letter to a federal appeals court late last week.

"In his first term, we’ve seen the president try to browbeat the Supreme Court," Romney told the audience at the NRA convention. "In a second term, he would remake it. Our freedoms would be in the hands of an Obama Court, not just for four years, but for the next 40. That must not happen."

Romney's statement refers to the fact that if re-elected, Obama may have the opportunity to appoint up to three justices, including filling the seats of two justices -- Antonin Scalia and Anthony Kennedy, both turning 76 this year -- who were in the court's 5-4 decision establishing an individual right to keep and bear arms for self defense in the home.

Responding to the landmark 2008 case that first articulated the individual right, Obama applauded the ruling. "As president, I will uphold the constitutional rights of law-abiding gun-owners, hunters, and sportsmen," he said in a statement just as his campaign against Sen. John McCain (R-Ariz.) was heating up.

On Friday, Romney turned that statement on its head. "We need a president who will stand up for the rights of hunters, sportsmen, and those seeking to protect their homes and their families. President Obama has not; I will."

Romney's implications echo NRA President Wayne LaPierre's speech at the CPAC 2012 conference in February. Obama, LaPierre said, is "already setting the stage for gutting the Second Amendment and our freedom," calling the president's first two appointments to the court, Justices Sonia Sotomayor and Elena Kagan "two of the most rabidly anti-gun justices in history."

Only Sotomayor has opined on a gun case, dissenting from the court's 2010 decision to strike down state and local handgun bans.

Mitt Romney At NRA: Beware Of Obama 'Unrestrained By The Demands Of Re-Election'
Conservative Short List For The Supreme Court 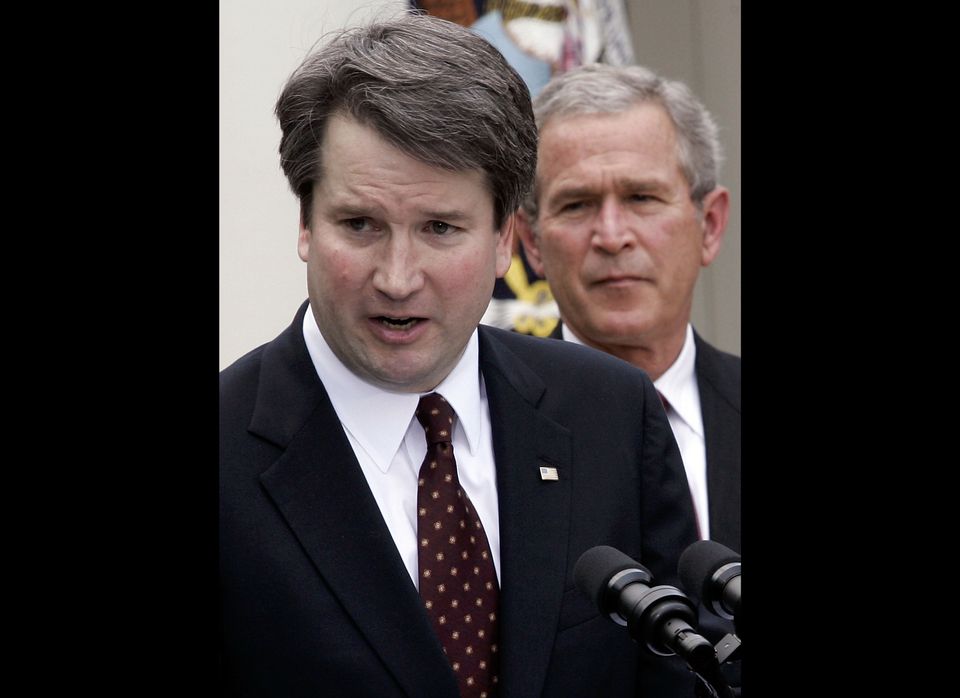 1 / 5
Judge Brett Kavanaugh
Judge Brett Kavanaugh is almost invariably the first name Supreme Court watchers volunteer as the next conservative justice. He sits on the right appeals court, he is the right age, and he has the right r&eacutesum&eacute. Kavanaugh's current perch is the U.S. Court of Appeals for the D.C. Circuit, which was the training ground for Chief Justice John Roberts and Justices Antonin Scalia, Clarence Thomas and Ruth Bader Ginsburg. Prior to his judicial appointment, Kavanaugh clerked for Justice Anthony Kennedy, <a href="http://www.washingtonpost.com/wp-srv/politics/special/clinton/stories/shadow061599.htm" target="_hplink">worked on the Starr Report</a> that led to President Clinton's impeachment, served as part of George W. Bush's legal team for the Florida recount battle during the 2000 election, and then moved into the White House Counsel's Office in the Bush administration. In 2006, at the age of 41, he was confirmed to the D.C. Circuit in a nearly party-line vote. One apparent hitch in Kavanaugh's consistently conservative record as a judge is his recent dissent in an <a href="http://www.cadc.uscourts.gov/internet/opinions.nsf/055C0349A6E85D7A8525794200579735/$file/11-5047-1340594.pdf" target="_hplink">Affordable Care Act case</a>, in which he advocated throwing out a challenge to the health care overhaul on a technicality. But on closer inspection, his dissent is hardly an act of ideological heresy. Rather, he was practicing the judicial restraint that Scalia has long preached, choosing to defer to a later day a decision on a law he clearly detests in the hopes that the political process will erase it from the statute books. Notable Opinion: <em><a href="http://www.cadc.uscourts.gov/internet/opinions.nsf/055C0349A6E85D7A8525794200579735/$file/11-5047-1340594.pdf" target="_hplink">Seven-Sky v. Holder</a></em>. Dissenting, he wrote, "Between now and 2015, Congress might keep the mandate as-is and the President may enforce it as-is. If that happens, the federal courts would resolve the resulting constitutional case by our best lights and would not shy away from a necessary constitutional decision. But history tells us to cross that bridge only if and when we need to. Unlike the majority opinion, I would adhere to the text of the Anti-Injunction Act and leave these momentous constitutional issues for another day -- a day that may never come."
Getty