WASHINGTON -- Mitt Romney was noticeably unwilling Friday to engage in a controversy around the manufacturing of U.S. Olympic uniforms in China, despite criticism from Republican and Democratic lawmakers alike.

Congress was up in arms Thursday over the discovery that the U.S. team's uniforms for the opening ceremony of this year's Olympic games were manufactured in China -- snubbing the nation's textile industry at a time when it has yet to recover from the economic downturn.

For the presumptive Republican presidential nominee, who has repeatedly promised on the trail to "get tough" on China, opposing the manufacturing seemed a likely stance, except that while at the helm of the 2002 Winter Olympics in Salt Lake City, Romney outsourced the production of torchbearer uniforms to Burma.

For Romney, the 2002 Olympics anecdote represents another instance of outsourcing under his stewardship, as President Barack Obama's reelection team continues to assail him for shipping jobs overseas while at private equity firm Bain Capital. It also exposes an embarrassing oversight in allowing the uniforms to be manufactured in Burma, which until just last year was controlled by a brutal military regime.

According to reports in 2002, the decision to outsource the torchbearer uniforms to Burma caused an uproar among human rights advocates and trade groups. It prompted the head of the International Confederation of Free Trade Unions to write a letter to the International Olympic Committee, stating that "No responsible organization or body should make use of products originating in Burma."

The American Anti-Slavery Group and the Free Burma Coalition launched a campaign to protest the uniforms and called on the IOC to apologize and “promise to never support -- indirectly or directly -- the Burmese regime."

Torchbearers, too, were shocked to see the “Made in Burma (Myanmar)” label on their tracksuits. "When I looked at the label for the uniform, I went nuts,” said 2002 torchbearer Susan Bonfield in an interview with the Guardian. “When you are sending work representing the U.S. to a military dictatorship, I have an issue with that."

More than 10,000 runners wore the uniforms, which are pictured on Daily Kos, while carrying the Olympic torch to the Winter Games. HuffPost has confirmed the authenticity of the photo of the uniforms.

Perhaps most embarrassing, after receiving emailed protests from more than 1,000 activists, the media relations department at the Salt Lake Organizing Committee confused Burma and Myanmar as two separate countries.

"The torch relay clothes were NOT made in Burma. They were manufactured in Myanmar," the organizing committee responded. "In fact they were made in the exact same factory that produces clothes for GAP, North Face and other major clothing labels."

Both Gap and North Face denied at the time that they purchase products manufactured in Burma.

After activists correctly identified Burma and Myanmar as the same country, the committee apologized for what it referred to as “misinformation” and confirmed that both the pants and top of the uniform were produced at a textile plant in Burma/Myanmar.

The Romney campaign did not immediately return a request for comment.

A PHOTO OF THE UNIFORM CAN BE SEEN BELOW (courtesy of TX Freethinker/DailyKos): 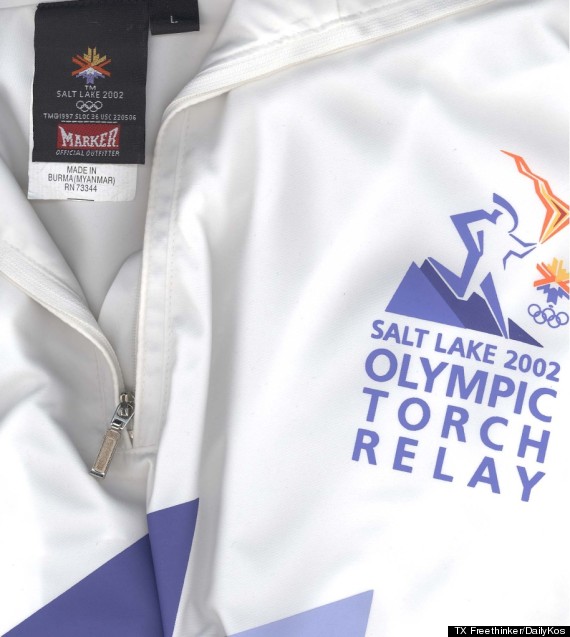