WASHINGTON -- Friday's news of yet another month of tepid job growth in April provided Mitt Romney with an opening both to criticize the president's policies and to paint a picture for what a more effective recovery would be.

"We should be seeing numbers in the 500,000 jobs per month," the former Massachusetts Governor said on "Fox & Friends." "This is way, way, way off from what should happen in a normal recovery."

Half a million jobs a month is certainly an ambitious goal. But it's an arbitrary one as well. During George W. Bush's presidency, there was never a single month in which job growth topped 400,000, let alone 500,000, according to Bureau of Labor Statistics. In fact, as Think Progress pointed out, "there have only been 16 months since 1939" in which the economy added half a million jobs in one month.

Obama inherited a more severe recession than Bush, which meant that he had a greater likelihood (and need) for a quick and pronounced recovery. Also, as Bush was dealing with the bursting of the dot.com bubble, September 11th happened, further elongating the timeline for recovery. 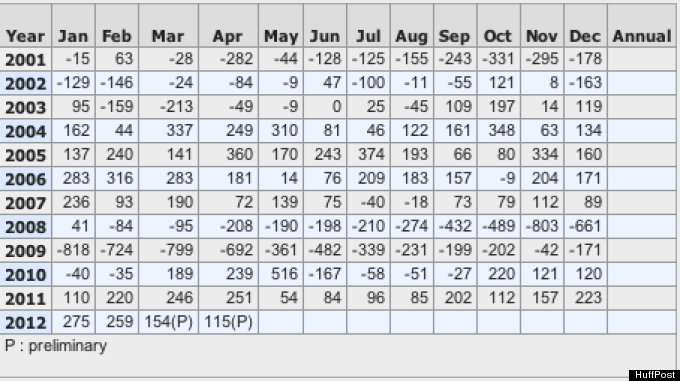 It's difficult to tie the job numbers of the first several months of a presidency to the sitting president. They are, after all, inheriting a situation left by their predecessor. Obama's first three months witnessed a loss of 2.34 million jobs; Bush saw a growth of 20,000.

What that meant, in economic terms, was that the current administration had a greater need to pass policies that would spur short-term employment. And while the stimulus package helped spur growth, the current numbers suggest that more was and is still needed. As The Huffington Post's Mark Gongloff noted, roughly 12.5 million people are still unemployed, with 88.4 million people still considered as "not in the labor force."

"Clearly the American people are wondering why this recovery isn't happening faster, why it's taking years and years for the recovery to occur," Romney said on Fox. "And we seem to be slowing down, not speeding up. This is not progress. This is very, very disappointing."

If, however, Obama is politically vulnerable on the economy, he has a blueprint to follow: The Bush reelection campaign focused heavily on foreign policy and threats of terrorism. But they didn't leave domestic matters untouched. Below is an ad they ran, touting the president's achievements on the job front and attacking John Kerry for criticizing (even marginal) success.

"After recession, 9/11 and war, now our economy has been growing for ten straight months ... 1.4 million jobs added since August," the ad goes. "John Kerry's response? He's talking about the Great Depression. One thing is for sure: pessimism never created a job."