On Wednesday night we kicked back with some snacks and watched as Mitt Romney addressed an arena full of voters on Univision. But we noticed something right off the bat: Mitt was looking a little orange.

Romney was in Miami (speaking at our alma mater) for a meet-the-presidential-candidate forum where he spoke about immigration issues and tried to do even more damage control for his "47%" remarks. But as Mitt talked, we grew increasingly distracted by the citrus-y brightness of the candidate's skin, which seemed to be approaching Tanning Mom levels of bronzitude.

We even tweeted about it to see if anyone else had noticed, and we got tons of responses: "Will Romney put on blackface to talk to African Americans and Warpaint for Native Americans?" one person wondered. "Is the same person in charge of speech writing, chair dialogue, messaging & specifics (that don't exist) also doing makeup?" another asked. One user said wryly, "He's hanging around Donald Trump entirely too much!!"

And there's more evidence: looking at photos from a campaign rally earlier that day, also in Miami, we eyed Romney's profile and detected a "foundation line" where he appeared definitely layered in a thick slab of orange-y makeup.

Mitt is live on Univision and seems to have borrowed 47% of the country's spray tan products. pic.twitter.com/l8PpA1Zz 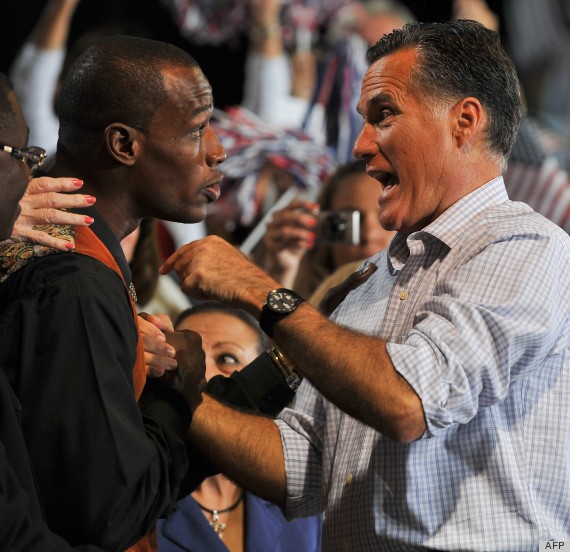