WASHINGTON -- Last week, political junkies focused on Rick Santorum's surge to a virtual tie in the Iowa caucuses, and this week most are watching the race for second place in the New Hampshire primary. But the more important contest may be the "invisible primary" for the support of local Republican activists and officeholders, a race in which Mitt Romney is making slow, steady progress, much as he has in the national polls.

On the eve of the New Hampshire primary, the latest Power Outsiders survey shows continuing growth in Romney's support among influential local Republicans in the early primary and caucus states. Those looking for a more conservative alternative are split between Newt Gingrich and Rick Santorum, and appear to have ongoing doubts about Santorum's electability.

The Power Outsiders poll conducted by The Huffington Post and Patch is an ongoing effort to reach out to local Republican activists, party officials and officeholders in order to better understand the invisible primary, generally a strong leading indicator in presidential nomination contests. This week, we interviewed 179 individuals: 43 in Iowa (only four less than last week), 62 in New Hampshire, 61 in South Carolina and 13 in Florida.

Since the survey revealed considerable uncertainty among these activists in early December, with only about one-third having publicly endorsed a candidate, we have opted to continue to track their personal preferences through the early primaries.

Romney has picked up support among these local Republican activists ever since their preferences divided principally between Romney and Newt Gingrich in early December. As Gingrich came under attack, Romney steadily gained supporters and has added more since the Iowa caucuses. Since our mid-December survey, Romney's vote has increased from 26 to 40 percent, while support for Gingrich has fallen from 27 to 20 percent. Meanwhile, Rick Santorum has jumped from 6 percent in mid-December to 13 percent on the eve of the Iowa caucuses to 16 percent this week. 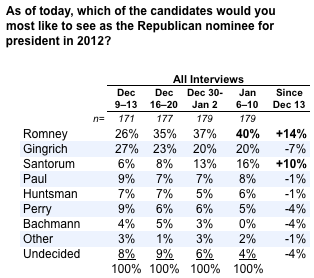 When broken out by state, the latest results look very similar to what we found last week, although somewhat surprisingly, Romney has gained in Iowa, winning support from 24 of 43 respondents (56 percent). He picked up six respondents who had previously backed other candidates. 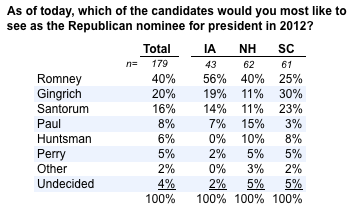 Romney continues to receive the least support from the local party activists in South Carolina, where only 25 percent of our respondents back him. However, even among those insiders, the vote for more conservative alternatives is divided between Gingrich (30 percent) and Santorum (23 percent)

Perhaps the best news for Romney is that his support jumps to more than half of the Power Outsiders in a two-way contest against Santorum. When asked to choose, 52 percent choose Romney to only 36 percent for Santorum.

In that two-way contest, Romney's numbers are once again weakest among the South Carolina party actors, but he runs essentially even among them, winning 14 of our respondents to 15 for Santorum (or 44 to 46 percent).

Santorum, whose Iowa surge has driven up his poll numbers in New Hampshire and nationwide, finds mixed success among these influential local Republicans.

We asked the Power Outsiders for one word to describe Santorum, and they offered almost as many negative terms (35 percent) as positive (39 percent). The most frequently used positive words included "consistent," "honest," "determined," "good," "principled" and "sincere." Frequently used negative terms included "unelectable," "extreme" and "whiner." "Conservative," a word that can be interpreted as either positive or negative in this context, was the word used most frequently (13 responses).

For comparison's sake, note that the Power Outsiders used positive terms more often to describe Newt Gingrich (70 percent), Herman Cain (74 percent) and Rick Perry (58 percent) at the height of their respective surges in the national polls. Santorum's profile is closer to that of Michele Bachmann in mid-September, and electability was also a significant concern for her.

Finally, as should come as no surprise, the Power Outsiders are convinced that Romney is poised to win the New Hampshire primary. Eighty-three percent believe Romney will win, compared to only 4 percent for Santorum and 8 percent for Ron Paul. A view of the responses by state shows that the belief Romney will win is greater outside New Hampshire, suggesting that some of the strongest supporters of Romney's opponents are not quite ready to give up hope. 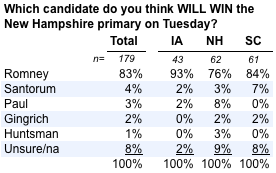 We also asked our respondents to guess the percentage of the vote that each candidate will receive in New Hampshire (using a web form that assisted them in choosing answers that totaled to 100 percent). As with the same question asked about the Iowa caucuses, the average responses come close to matching the public poll numbers available over the past weekend. 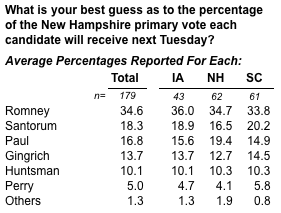 Our surveys are not a scientific random sample of any larger population but rather an effort to listen to a swath of influential local Republican activists, party leaders and elected officials in Iowa, New Hampshire, South Carolina and Florida. All of the individuals listed below have agreed to participate in the surveys, although not all responded to this week's questions. Interviews were conducted between Jan. 6 and Jan. 9, 2012.