WASHINGTON -- While not as dramatic as the change in some polls of the wider electorate, support for Mitt Romney among local Republican activists in the early primary and caucus states has risen over the last week, while support for Newt Gingrich has slipped.

Still, with just two weeks remaining before the Iowa Caucuses, the latest Power Outsiders survey conducted by The Huffington Post and Patch also shows that more than one-third of these local Republican insiders remain uncertain about their choice for president.

The Power Outsiders poll is an ongoing effort to reach out to local Republican activists, party officials and officeholders to observe the critical "invisible primary," usually a strong leading indicator of voters' preferences in presidential nomination contests. This week we interviewed 177 Power Outsiders: 49 in Iowa, 58 in New Hampshire, 57 in South Carolina and 13 in Florida.

Because our last survey revealed considerable uncertainty, we opted to recheck the preferences of our Power Outsider universe . Among all respondents interviewed this week, Romney now holds a 12-point lead over Gingrich (35 to 23 percent). Last week's respondents were split more evenly between the two (27 percent for Gingrich, 26 percent for Romney). All the other candidates remained mired in single-digit support both weeks. 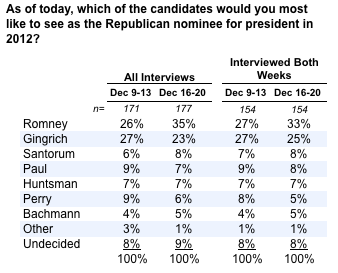 If we narrow our focus to the 154 respondents who participated in both of the last two surveys, we see that most (79 percent) kept the same choice from week to week. Romney gained the votes of a net 6 percent, upping his support from 27 to 33 percent of those interviewed both times.

His margin on the full sample is slightly larger because he was the choice of 10 of the 23 Power Outsiders interviewed this week only.

Although Romney has increased his support among these influential local Republicans, more than one-third say they may yet change their mind about the candidate they currently back (29 percent) or remain completely undecided (9 percent). Not surprisingly, that indecision is greatest in South Carolina, whose primary is still a month away. Many of our respondents may wonder whether their first choice will still be a candidate after the New Hampshire primary. 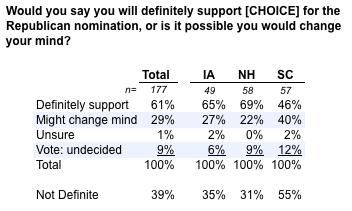 We also asked the Power Outsiders how their opinions of three candidates -- Gingrich, Romney and Ron Paul -- have changed in the last week or two, and those attitudes generally confirm the shifts in support. Although about one-half say their opinions of each candidate have not altered, more say their view of Gingrich has grown less favorable (28 percent) than say it has grown more favorable (22 percent). A greater number say they are feeling more favorable toward Romney (26 percent) than less favorable (17 percent). 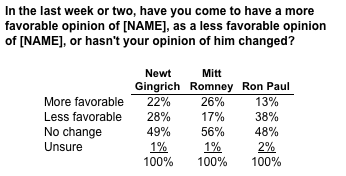 We asked those reporting changed opinions for more specifics. Among the 41 respondents who say they feel less positive toward Gingrich, 12 mention either Freddie Mac or more general concerns about ethics or lobbying. Keep in mind that only three of the 41 had supported Gingrich on the previous survey.

Our respondents were more likely to say their opinions have soured on Paul, with 38 percent saying their view has grown less favorable in recent weeks and 13 percent saying their view has grown more favorable. More than half of the 50 respondents who reported less favorable views of Paul referenced either his comments on Iran specifically (10), his views on foreign policy or defense generally (17), or the Dec. 15 debate at which he discussed Iran (3).

Again, virtually all of those who say their opinion of Paul has worsened are not Paul supporters. Only one respondent who supported Paul on our last survey said that opinion has grown worse, and the person remained a Paul supporter on the current survey.

Should Ron Paul win in Iowa, it will be because his campaign turned out voters who are not part of the local Republican establishment or even regular Republican primary voters. Paul has never been a favorite of the Power Outsiders, although he holds a narrow lead on the most recent automated poll of likely caucus-goers conducted by Public Policy Polling, which shows his support coming disproportionately from independents and younger voters. And they might not care about his recent debate performance. But the impression it made on Power Outsiders reinforces the difficulty that Paul will have in winning over more traditional Republican primary voters.

Meanwhile, just when it matters most, Mitt Romney is steadily gaining support from influential Republican activists, both at the local and national levels. They have not yet reached consensus, but the invisible primary is tipping in Romney's favor.

Our surveys are not a scientific random sample of any larger population but rather an effort to listen to a swath of influential local Republican activists, party leaders and elected officials in Iowa, New Hampshire, South Carolina and Florida. All of the individuals listed below have agreed to participate in the surveys, although not all responded to this week's questions. Interviews were conducted between Dec. 16 and Dec. 20, 2011.