WASHINGTON -- Rick Perry may have impressed politically engaged Republican activists in Iowa, New Hampshire and South Carolina, but Mitt Romney impresses them even more. Romney is someone with "presidential" stature who can win the general election -- that's the message of the latest Power Outsiders poll conducted by The Huffington Post and Patch.

This week, our HuffPost-Patch Power Outsiders poll of 159 political activists, party officials and officeholders in the early primary and caucus states focuses on former Massachusetts Governor Mitt Romney. The poll does not survey all Republican voters, but rather attempts to listen in on the "invisible primary" underway among influential local activists and political insiders that has historically driven the outcome of party nomination campaigns. This week, we heard from 34 Power Outsiders in Iowa, 58 in New Hampshire and 67 in South Carolina.

We first asked respondents to use one word to describe their impression of Romney. The majority of answers (59 percent) were positive. The most frequently used positive words, as presented in the word cloud below, were "presidential," "experienced," "polished," "competent" and "smooth."

More than a quarter of the words used to describe Romney (28 percent) were unambiguously negative. The most frequently used negative words were "RINO" (an acronym for the phrase "Republican in name only"), "flip-flopper," "plastic" and "slick."

The breakdown of positive and negative judgments of Romney looks roughly comparable to what we found last week when our survey focused on Texas Governor Rick Perry. The percentage of positive words used to describe Perry was similar (58 percent), but the share of negative words was slightly smaller for Perry (24 percent) than for Romney (28 percent). 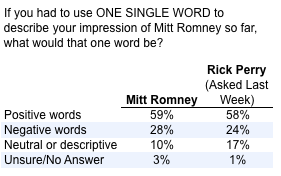 But beware making too much of these comparisons; our coding may have missed hidden meaning in ambiguous words we classified as "neutral" that may have had either a positive or negative connotation for the respondent. These include words like "businessman" for Romney and "Texan" for Perry.

More specific probes reveal an even more favorable reaction to Romney. More than four out of five respondents describe Romney as someone who "takes stands on issues you agree with" (80 percent). Even more say he "would make a good president" (86 percent)" and "can beat Barack Obama in the general election" (89 percent). 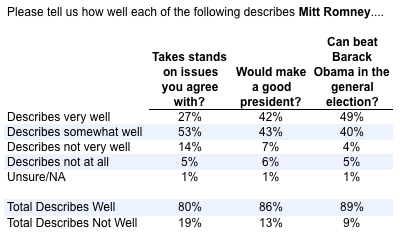 We can add greater context by comparing these results to the reactions to Rick Perry we gathered last week. Romney gets a higher positive rating than Perry on all three questions, but especially on electability (89 percent for Romney versus 76 percent for Perry). 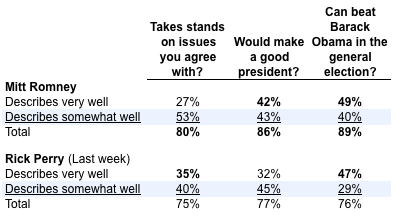 The difficult choice facing these influential Republicans comes into sharper focus when we look at the differences among individual respondents interviewed both weeks (of the 159 we spoke with this week, 125 were interviewed last week as well). Most have positive impressions of both Romney and Perry. On the one-word description, for example, 37 percent use unambiguously positive words to describe both Romney and Perry, 27 percent describe Romney positively but Perry negatively, 23 percent describe Perry positively but Romney negatively, and the rest are either negative (9 percent) or neutral (4 percent) about both.

Romney has a slightly bigger advantage on electability, but most of these locally influential Republicans still see both candidates as viable choices. Nearly half (45 percent) of those we interviewed for both surveys rate Romney and Perry exactly the same in terms of their ability to beat Obama, and most of these (42 percent of the total) think either candidate can beat Obama. Slightly more rate Romney more positively than Perry on electability (34 percent) than rate Perry more positively than Romney (21 percent). Most of that difference, however, is accounted for by those who feel "strongly" that Romney can beat Obama, but are only "somewhat" convinced that Perry can do the same.

Our surveys of local Republican activists in the early primary and caucus states yield snapshots of two candidates who have made positive impressions. Mitt Romney is widely seen as prepared and "presidential," while many conservatives give Perry the edge on issues they care about. Most see both as viable candidates for the general election, though as of the last two weeks, Romney has a slight edge on electability.

Our surveys are not a scientific random sample of any larger population but rather an effort listen to a wide swathe of influential, local Republican activists, party leaders and elected officials in Iowa, New Hampshire and South Carolina. All of the individuals listed below have agreed to participate in the Power Outsiders surveys, although not all responded to this week's questions. This week's interviews were conducted between Sept. 9-13, 2011.