WASHINGTON -- Over the past week, Mitt Romney's support in the Gallup Daily national tracking poll on the Republican nomination rose above 30 percent for the first time. Gallup's most recent update on Thursday gives Romney 34 percent of the vote and a better than 2-to-1 lead over Rick Santorum (15 percent), Newt Gingrich (14 percent), Ron Paul (13 percent) and the rest of the Republican field.

For the better part of the last year, however, the best advice has been to either ignore national polls or at least read them with great skepticism. The history of the nomination battles of the last 30 or so years has been that the early primary and caucus states reshape the race, by winnowing the field and significantly increasing news coverage. Up until now, many primary voters have not been paying attention and have not made up their minds.

In short, January is the month when the party decides.

Consider the 2008 Democratic presidential nomination contest. As seen in the chart below, national polls showed a mostly stable pattern before the Iowa caucuses. Hilary Clinton held a large, double-digit lead over Barack Obama and the other candidates that expanded slightly during the summer of 2007. In the month after the Iowa and New Hampshire voting in early 2008, however, Obama surged. He continued to gain throughout January, following a victory in South Carolina and moved ahead of Clinton in national polls just after Super Tuesday on Feb. 5. 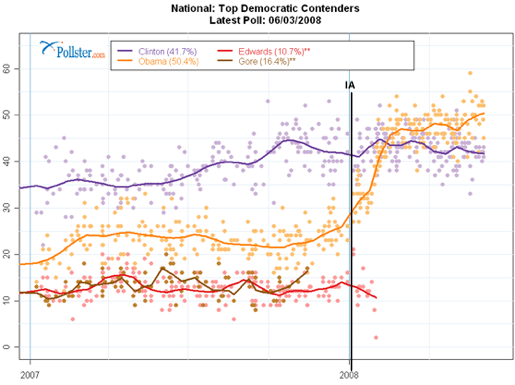 After February, voter preferences again stabilized for most of the rest of the primaries, with Obama maintaining a modest lead nationally that ultimately translated into his accumulating the delegates needed to secure the Democratic nomination.

The charts that follow, created for The Huffington Post by Pollster.com co-founder Charles Franklin (who now runs PollsAndVotes.com), also track the national polls but focus only on the ultimate nominee. The example below again shows Obama's share in 2008, with each dot representing his percentage of the vote in an individual national poll. This view of the data better illustrates the two distinct bumps for Obama that occurred just after his Iowa victory and again following his big win in the South Carolina primary later in January. 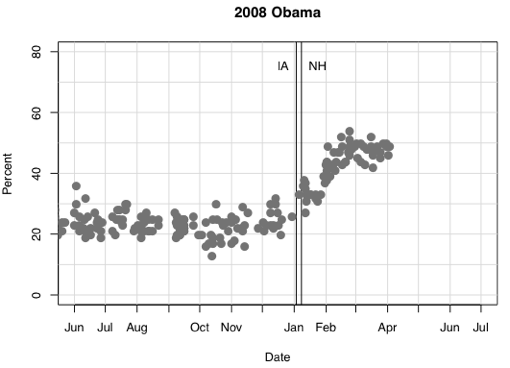 The even more dramatic surge to John McCain in the 2008 Republican contest occurred over the same time period. His support rose roughly 15 percentage points following his victory in the New Hampshire primary, then surged 20 or more points following his domination of the Super Tuesday primaries. 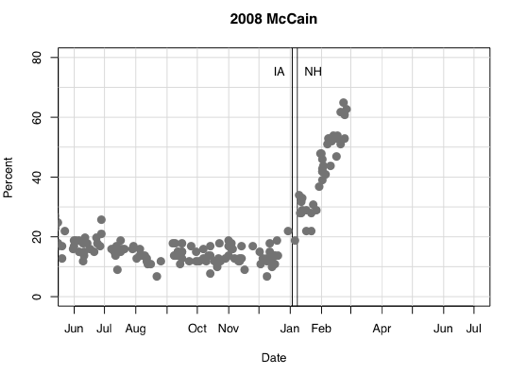 The surge toward John Kerry in the 2004 Democratic nomination race was bigger, faster and even more decisive. By late 2003 Kerry's support had fallen to single digits in the national primary polls but exploded to the mid-40s immediately after he won both the Iowa caucuses and New Hampshire primary in 2004. Two weeks after winning in New Hampshire, Kerry was the choice of a majority of Democrats in every national poll. 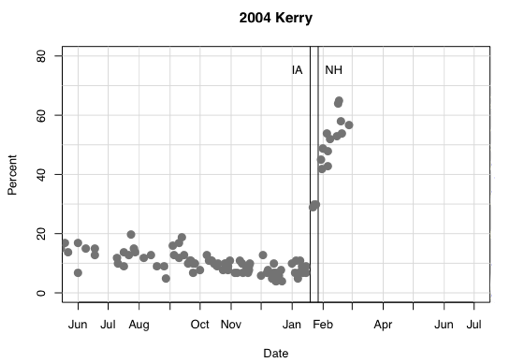 There have been exceptions to this pattern, of course. Dominant early front-runners like Bob Dole in 1996 or George W. Bush in 2000 saw little change in the level of their national support following the Iowa and New Hampshire contests. And when early primaries produced a more split verdict, such during the Democratic battles of 1988 and 1992, voters were slower to shift their support to the ultimate nominees.

Consider 1988, when Missouri Rep. Richard Gephardt and Illinois Sen. Paul Simon finished first and second in Iowa's Democratic caucuses, then Massachusetts Gov. Michael Dukakis won the New Hampshire Democratic primary, as expected. Partly as a result of the greater media attention paid to the Gephardt-Simon battle for second place and partly because of the even greater attention given the dramatic New Hampshire comeback by George H. W. Bush, Dukakis saw only a modest polling bump following New Hampshire. Polling was far less frequent than it is now, but his support did not reach or exceed 40 percent nationally until after primaries in March and April finally winnowed the field. 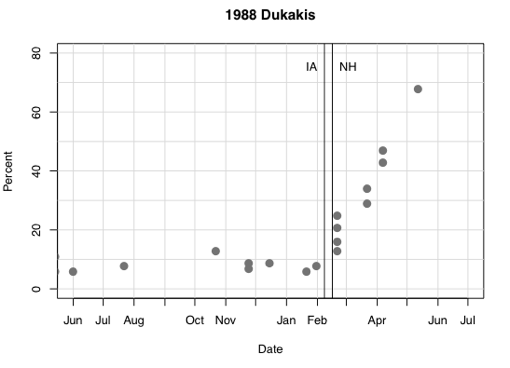 Romney and Dukakis were Massachusetts governors who easily won their respective New Hampshire primaries, but the parallels largely end there. Although this year's Iowa caucuses yielded a near tie, Romney can claim a victory in Iowa that eluded Dukakis. The remaining question is the outcome of the South Carolina primary, whose role in winnowing and deciding Republican contests has rivaled that of the Iowa and New Hampshire events for at least three decades. The historical pattern suggests that if Romney wins there, as McCain did, his support in national polling is likely to soar.

The signs for Romney are already promising. Again, the Gallup tracking has shown his support rising 10 percentage points, from 24 percent to 34 percent, in the 10 days since just before the Iowa caucuses. Other recent Gallup surveys identify Romney as the only candidate considered "acceptable" by both conservative, and moderate or liberal Republicans and the one widely seen as most likely to win the nomination.

Either way, as the past data indicate, January will be the crucial month. Rank-and-file Republicans have shown unprecedented uncertainty about the presidential race over the last year, as one candidate after another has taken a turn surging and declining in national polls. The next 30 days are likely to be the period when most of these Republican primary voters make up their minds, once and for all, about their preferred nominee.