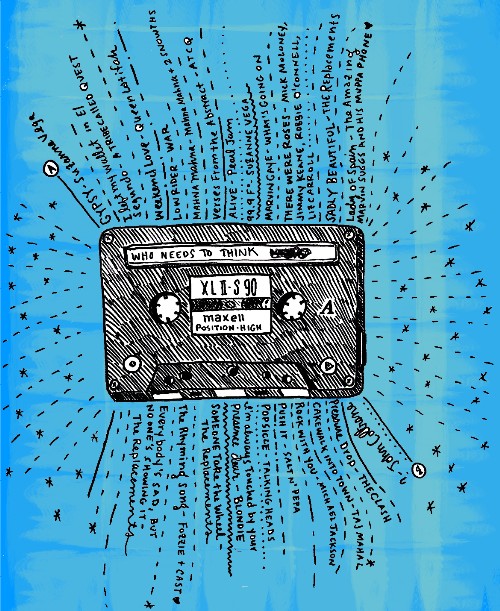 Awhile ago, I got rid of all my cassette tapes, with the exception of all the mixed tapes that I've amassed since 1991. My best friend in college was the QUEEN of delaying schoolwork by making up crafts. She showed me not only how to make colorful stickers out of packing tape, magic markers, and binder paper, but she also introduced the beauty of the mixed tape. Soon, I was making "To Study" tapes -- tapes that would apparently help me study. Sometimes I made tapes just for Wednesdays, or to mark the end of the semester. Then I realized the special power that mixed tapes had when given to someone else. That's when mixed tapes really took hold in my life.

Nearly every boyfriend I had since 1991 got a mixed tape, as did a number of long distance friends. My parents even suffered a few. (My mom once asked me what I was trying to tell her by putting Prince's "Little Red Corvette" on her birthday tape of 1992). The making of a tape had a specific system: 22-24 songs fit on a 90 minute tape (depending on the song length); I had to start both sides with a ROCKER, that acted as a call to arms, then the tape would end on a sort of quiet, thoughtful note. They were like letters that I wanted to fill the recipients with. I tried to woo boys I liked with tapes. I tried to keep my friends near. In a way, I captured my own life with these collections.

To look at them now they do feel like their own diary. The ones I made for myself chronicle the arc of my musical taste and thus the arc of my personal development. The earlier ones are filled with a mishamash of what was popular at the time, and music I collected from the hallways of 1990′s dorm life -- Indigo Girls, The Sundays, Paul Simon, etc. I look in disbelief and see a MARIAH CAREY song listed (for PETE's SAKE!), followed by a Lenny Kravitz song on a tape. Who was that girl who listened to that tape? Then I see how everything changed when I learned to play guitar and wanted to be a Riot Grrrrl -- then it was girl rock all the time, baby: Patti Smith, PJ Harvey, Liz Phair, Hole, and on and on.

It seems appropriate that one of the last mixed tapes I made was for my husband. This was when we were "just friends," but I seriously had it BAD for him. We had already had the do-you-like-me? talk, but it wasn't going to happen. He was moving to New York in a week and that would be that. I was heartbroken and happy at the same time -- the perfect mood for making a mixed tape. So I spent TWO DAYS on his tape, culling and rethinking and wondering what this song would tell him and what this song would do for him. The tape was an old letter I was writing to him. It said, Take me with you. There must have been something in that tape, because, as it happens, he did.