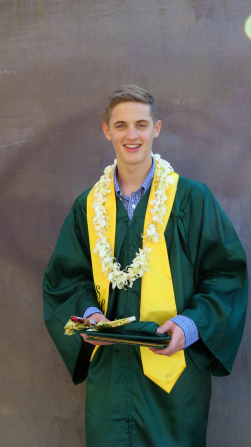 My boy, stepping off into a big, bright future...

On June 7, 2014 my youngest child, walked across the stage at a local college's gymnasium and got his high school diploma. As it was when his older sister and then his older brother did it, the day was filled with emotions that cover the spectrum. I was proud of him for sticking it out and getting there, when school was never an easy thing for him. I was happy that he could exhale and take a little break from that effort (having decided to take a gap year). It was emotional knowing that my last "baby" is really growing up -- though I have long come to understand that 18 is the new 15, and this in no way means my nest is truly empty. Even if he were going off to a four-year college and moving out, it 'aint even over when they walk across that other stage! Cause 22 is the new 17, and they often come back! (read here) *Don't question my math!

If you've been in a gymnasium, watching your youngest child finish 12 years of school -- 12 years of hand-holding; birthday parties; play dates; schoolwork and school friends; worrying and celebrating; sports events ... 12 years of watching your child work toward going out in the world on their own, then you know how a mother's heart can expand and surge, fracture and grow. That moment was precious and overwhelming all at the same time.

When my older daughter and older son graduated from high school it was emotional as well. Watching your oldest child take those first steps in to adulthood is certainly transformative. There are no previous touchstones; it's all new and impactful. Our girl is such a free spirit, such a self-driven individual. It was amazing and emotional to see my baby finish the first phase of school and life. I cried me a river, channeled by equal parts joy and loss. It was no easier when my middle son did it. He was attending a challenging boarding school, living and going to school an hour away from us -- I was so proud of him when he walked across the stage to get his diploma. Sacrifices were made on all sides, for him to reach those goals, and it was very exciting to see him find success.

I watched my two older children graduate from high school and move on to college. I cheered them and supported them as they navigated living away from home -- Principessa: in Massachusetts, 3,000 miles away, and Middle Man in California, just a two-hour flight. They both graduated college, and have flown afar. It hasn't always been easy; there have been countless speed bumps. She went off to Israel, where she now lives, and he did half a year in China and is now in Australia for a year. As I've written previously, there are so many adjustments as your children grow up and move on. You come to accept that they are no longer in your care and watch; there are no curfews for you to wait up for; you may not know where or how they are much of the time- or, you become a neurotic mess. They are out there living their own lives, and as a parent you can only sit back and hope for, wish them, the best.

Even though I've been through this two other times, watching my youngest son graduate high school was transformative in a much bigger way, than I anticipated.

My youngest, Little Man, grew up in the community where we have now lived for 14 years. He started kindergarten here and graduated from high school here. As a stay at home mother, I have been very involved in my children's school lives, and that has involved many years of working side by side with so many players in so many roles. It has involved watching him struggle and succeed, and make his way to that day. Somehow, watching him graduate, I felt as if it all was happening in slow motion, as we both exited the arena we've both been in for all these years.

As I sat at graduation this time, I looked around the huge room and took in so many faces that I've known for years and years. Many of those faces have been a part of my son's life -- they've encouraged him, they've chaperoned him, they've baked for, cheered for, and witnessed countless moments in his life, and many of these same faces have walked side by side with me. While many of them have embraced me, many have not; we have not always been friends, but there we all sat, feeling many of the same things: a wellspring of so many emotions.

As all of this swirled around my head, as I craned my neck to see my boy's anticipatory expressions, his and his classmate's moments of transition, and I realized that my own life was spinning into an enormous new zone as well. "Empty nest" is over used. It's a fun and universally known phrase to throw around when talking to people, but it doesn't begin to address what it feels like as you arrive there. What is the nest? Is it he house you've all lived in? Is it the seasons of your children's lives bundled together? Is it your mother heart? And is it really empty? 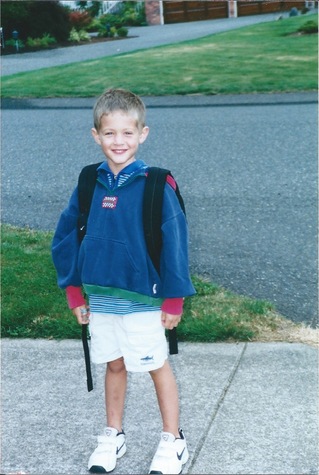 It doesn't seem like that long ago that this little boy started kindergarten, but...

My youngest son turned 18 last August. He is taking classes locally and working at the grocery store where I shop all of the time; he's living at home for now. Two of my nephews have moved in with us. My nest is far from empty. But, when I reflect on where I was 18 years ago, when my son and I started out together, it was an entirely different world, an entirely different perspective. If I go back two more steps, to the arrival of my first child, I was 27-years-old. That is stunning to me! My own daughter is two years away from that age now, and expecting her own child. I was starting out as a mother and heading into some of the most amazing years of my life. Age seemed a silly number to me, then. When my boy walked across that stage, and stepped off into his future, he is facing some of the most amazing years of his life, while the next 18 years will see me turning 70 ... 70 years old!

It takes my breath away!

It's unreal to imagine those years are before me, when I can so easily remember my young babies. I can still see their nursing faces close to my skin, and recall their sweet early years, but I can't begin to imagine myself as a 70-year-old woman. I can't honestly see the road ahead. But as scary as that is, it is also freeing. The day my boy graduated so did I. I've realized that more than ever; these years can't be wasted. There are no guarantees, and while there never were, it's clearer now. I can't waste my energies on anything that doesn't bring me joy, that doesn't fill me up. I don't have room for people, things or situations that suck the sparkle out of the years I have, or myself, and I don't want to suck anyone else's from them.

I can certainly see the writing on the wall, but I don't always get it. I don't always know the way and I feel lost. I get lost. At 52, it's sobering to really see that you don't have it all figured out. I also have learned that I'm my own worst enemy, my own biggest stumbling block. Over the years I've gradually accepted that the road is not straight; it's not even, and it's certainly not always easy. There comes a time when you either get that some people don't want to play with you- no matter how many times they like your Facebook status or smile at you in public; that wanting something- working hard for it, doesn't mean it's going to work out (and you can find yourself paralyzed in seeking your own dreams), and that the clock is just keeps ticking.
Tick, tock, tick, tocking faster all the time!

Without the buffer of youth, I see a lot of things very differently these days. I like that part of aging -- the broader perspective that comes with experience:, loss, success, pain, joy, age. My life is complicated and stressful. Some of that I have control over and some of it I don't, but I do have control over reaction to it. I choose to hold my feet to the fires and grow. Each challenge brings growth, and an opportunity to take a new path. That's not always easy, or comfortable, but it's something you don't necessarily recognize when you're young, and the years haven't added up. My daughter sent me this 1+ minute video, recently, and it really struck me- https://www.youtube.com/watch?v=3aDXM5H-Fuw

This is where I am. I'm a lobster.

Graduation day was huge this time around. I know my son will be fine -- he'll be great. His high school graduation is just the beginning of some amazing times to come. For me, it's the start of a very different time in my life. It's a time for me to pull back and figure out what I really want, and not chase my tail or race down one-way streets. A good friend recently noted that deciding to really be true to what is best for you can sometimes make for some lonely days and nights. So true! But, I'm no longer afraid of being quiet; I don't need to fill the space. I'm not aching to be included anymore, and I'm fine sitting by myself- at home, at a café, at lunch. I'm grateful for the friends I have, and the amazing life I've had. None of it's a given. This next 25 years will be very different than the last 25, and while my boy got the diploma in June, I feel like -- at 52 -- I've finally graduated too. 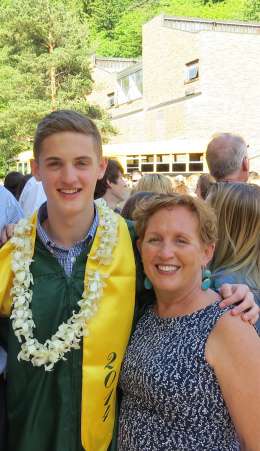 Me and my boy, on Graduation Day

This song played at my high school graduation in 1981 ... 34 years later, I finally get it. https://www.youtube.com/watch?v=1sQ7cuYgjzw
"I've been afraid of changing, because I built my life around you. But time makes you bolder; children get older ... and I'm getting older too."

PHOTO GALLERY
Tips For Living With Adult Children
Download
Calling all HuffPost superfans!
Sign up for membership to become a founding member and help shape HuffPost's next chapter
Join HuffPost

1 / 5
1. Discuss Household Expectations
"Discuss the expectation of parents and kids in terms of how you behave at home and what responsibilities they have," said Katherine Newman, dean of the school of arts and sciences at Johns Hopkins University and author of <em>The Accordian Family: Boomerang Kids, Anxious Parents and the Private Toll of Global Competition</em>. "It's better to talk these things over rather than be silent and grinding your teeth behind closed doors." Groceries, cooking, laundry and tidiness can all be areas of conflict, so lay down some ground rules. <em>Photo courtesy of <a href="http://www.flickr.com/photos/syobosyobo/" target="_hplink">jim212jim</a></em>
Flickr:jim212jim