Being multiracial in the United States of America is a truly unique and active experience. When your ancestry consists of such intertwined and individual realities it can be almost impossible to reconcile between all of them while simultaneously expressing your own personal identity. You can often find yourself at odds between the different historical legacies associated with your individual racial heritages, whether you are an active participant, an outsider or both. Being a mixture of Afrikan, Native American and European ancestry, I often find myself traveling on a racial path that is all my own. Like Earl Sweatshirt has said, I was "too black for the white kids, and too white for the blacks." I didn't fit perfectly into one specific group because I carried the baggage of every other race with me.

When you don't fit in, you're forced to see things through multiple viewpoints and create a balance between how you are perceived and who you actually are. Being multiracial forces you to move between different worlds, across categories and through all definition. You don't experience things in a linear fashion, but through a series of multifaceted layers outlined by the trauma of your ancestors. The racism I receive as a black man in the United States isn't just an attack to the racial heritage I carry on from my black ancestors. It's an attack specific to my racial mixture -- and I experience this racism not only as a black man, but as a Native American and a European.

When I was younger, I remember walking with my mother and my two siblings through the aisles of the Toys "R" Us in my hometown looking at toys for Christmas. My mother has a fair complexion and straight, blond hair while my siblings and I simply aren't. We are dark in skin tone and have very curly black hair. Even though the physical differences between my mother and her children outweigh the similarities, we do noticeably share some of my mother's facial features. Features you would notice if you were to look beyond the rigid definition of our skin. While walking, we were stopped routinely by middle-aged and older white men and women asking my mother if she babysat us or adopted us through Child Services. This wouldn't be alarming if this was an isolated incident, or if we only received this treatment from older white folk, but it didn't matter whether it was at a McDonald's, a hospital or even a bank ... strangers of every race couldn't see us as my mother's children.

"Wow, what cute little kids ... how long have you been babysitting them?"

"Oh, look at these children, bless you for adopting them."

"How much do you get from the State for each one?"

Hearing these words at such a young age confused and wounded us. Were we any less European than her? Did we not have a right to claim we were her children? Why couldn't we just be accepted for who we were instead of what we looked like? Unfortunately, this phenomenon isn't unique to my family, as many mixed-race people have been othered from their family members simply because of the difference in skin tone. When it comes to race, society is so quick to create an "in-group" and an "out-group" based upon physical characteristics and attributes that you can often find yourself included within one group, but excluded from another. For example, my Afrikan ancestry has granted me access to the in-group of black culture in the United States, but because I got good grades in school, liked rock music, and "acted white," I was excluded from that same in-group. I was called a nerd, an Oreo, and a faggot for characteristics of my personality that weren't "black." My individual situation is why people of mixed race are often alone in their struggle for acceptance and visibility in their communities. Reminiscent of Ralph Ellison's Invisible Man, we are invisible to our individual communities and society at large because we are refused to be seen, much less accepted. This refusal of acceptance even applies to interracial relationships, despite the results of Loving v. Virginia back in 1967.

While I was growing up, my parents would often tell me stories about when they lived in Burbank, California during the late 1980s and early 1990s. Before I was born, my mother and father enjoyed the nightlife of Southern California, navigating the same dating norms as everyone else, but even they were not impervious to the disdain of others. My mother told me of the threats she received from black women and white men who found her relationship with my father disgusting, and I found they echoed the same threats my father received.

"You couldn't find a good man so you shacked up with this nigger?"

"Look at those two, what gives them the right to walk around like that?"

This wasn't 1954, or 1967 -- this was 1990. If people still can't stand mixed couples, then what chance do kids of mixed race have? If we don't fit in with our parents, our communities, or our society, then how can we say America is the proverbial melting pot? How can we say we're the land of the free, or the home of the brave when we don't even have the courage to admit our own prejudices?

The common thread that connects all mixed race individuals is the inclusion and exclusion we receive from our communities, and how we all navigate through our own individual paths toward identity, acceptance and freedom. It's a lifelong process. Some will succeed. Some will fail. However, if we don't take the time to accept what makes us all different, we can't bask in the warmth of our similarities, meaning we all lose -- mixed or not. 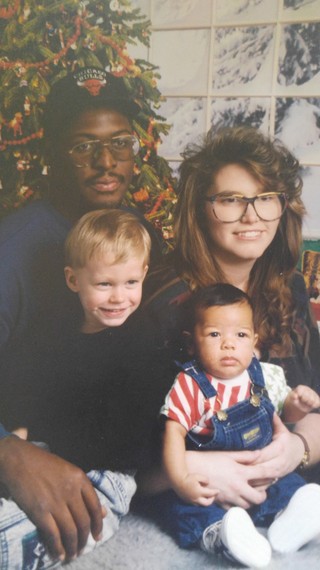