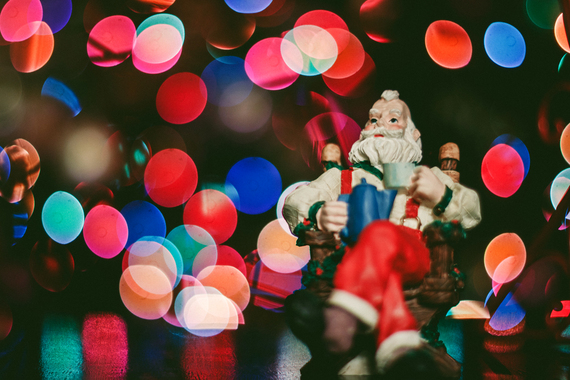 I remember the good old days when I could find all sorts of fun, quirky things to write about at this time of year: cheerful vignettes about childhood holiday memories, charming seasonal facts long forgotten, the ten worst Christmas traditions ever; you know... meaningful stuff like that.

The holiday season just seems to lend itself to warmth and whimsy, the exploration of themes related to love and gratitude, our favorite recipes and the funniest Santa Claus pictures. Unless one is truly a curmudgeon, it's almost impossible to not have least one happy memory attached to this time of year. I was--and am--no exception.

In fact, I love Christmas. I'm one of those. It makes me happy. I feel no compunction to spend money I don't have, plans trips I don't wish to take, or attend events I'd rather avoid. I'm very protective that way. It's all about designing a season in which the only obligation is to create happiness for those within the circle. In fact, my husband and I began our marriage by making our first Christmas a thing of joy, and those handpicked ornaments and table decorations, cookie traditions and family gatherings, favorite meals and notable activities, sustain to this day, as precious to us as anything we hold dear.

But still, I've been more serious lately. Life got more serious. I blame the election. The damn, interminable election that sucked the air out of our nation starting a little over a year ago and ratcheting up every day since. It's been a war of sorts, one that's left us battered, bothered, and bewildered. As one friend put it, "I hate that I'm actually in fear for our future. I've been disappointed in election results before, but I've never felt terrified about where this person might take us, or how and if we'll survive."

I'm not one who lives in fear, but I feel her pain. I share the concern. Despite previous political conflicts, rancorous partisanship, and caustic disparities amongst the parties, I, too, have never felt quite the level of darkness and toxicity that permeates this particular election... and this particular person. That the man entering office is doing so despite his opponent winning almost 3 MILLION MORE VOTES, and despite the fact that the wisest, more experienced, most admirable and honorable men and women in the country/world believe he's an unmitigated disaster, means little at this point. We are here. Where we are. And at this moment there's no changing that (later moments...we'll see).

Dealing with the daily litany of horrible, idiotic, hateful, head-shaking, corrupt, indecent, and just plain stupid things the next presi-- (I can't say it... I won't... #NotMyPresident... ever)--occupant of the White House says or does has been exhausting and unnerving (that's a tepid word... how about TERRIFYING?!). I have no idea where it's all going either, how long the trainwreck will be allowed to smolder before someone gets it to the scrap yard, or if we'll be teaching our children how to desk-dive in "nuclear drills" before the year is over. But I won't live in fear. I prefer the sentiment of the poem, "Protest," by Ella Wheeler Wilcox, a section of which Dan Rather shared:

To sin by silence when we should protest
makes cowards out of men. The human race
Has climbed on protest. Had no voice been raised
Against injustice, ignorance and lust,
The inquisition yet would serve the law.
And guillotines decide our least disputes.
The few who dare must speak and speak again,
To right the wrongs of many.

I will live by that. I will continue to raise my voice, as Ella suggests, to "speak and speak again," however loud and long is required of me. I promise you that.

And Christmas is important. We humans need the rituals and traditions of our holidays, those times when we can collectively acknowledge and experience celebration and joy. Without them we might end up spending all our time wailing on social media, and that's not a good thing!

But to those for whom loss or grief keeps them from finding the joy... those whose loneliness and isolation occludes their ability to embrace the happier aspects of seasonal celebration, I say this: I understand. I do. I've been there. I know how tough it can be, when you're in those particular places, to carry on about "jolly St. Nick" and the proper temp for Christmas roast. My beloved grandmother died the morning of Christmas 1979. I had some of the loneliest days of my life over Christmas of 1988. I went into the season of 1989 having just lost a job. I got dumped once right before Christmas. My father died in early December of 1999. I know how those seminal events, those states of being, can impact one's ability to celebrate and be happy, Christmas or no Christmas.

I hope, though, that through friends, through social media, through whatever connections you can make, can find and feel in your world, that you're able to glean at least a moment or two of warmth and holiday spirit this season... I wish that for you.

As for me this year: I'm fortunate. My family is healthy and doing well, my work is moving along; I've got a new theatrical adventure to begin this coming year (more on that soon); the house looks magical, the gifts are wrapped, the cookies are baking, every gathering has met expectations, so we're doing it up right. But yes... at least a few times a day, as I do my work online, I check social media and various news sources to see what the hellfire is going on, and dammit if I don't have to tweet or post or write or share or comment or yell about one damn thing or another because that little orange mother--BUT WAIT!!

It's Christmas... I'm mellow and jolly, wrapped in reds and greens, nutmeg and cinnamon wafting through the air; Music Choice is set to "Sounds of the Season" and it's so, so, so lovely... so NO! Donald Trump does not get my holiday! He may have shattered my belief in democracy, lowered my estimation of human decency, made me question how deep my coffer of disdain can go, and raised my level of revulsion beyond good health, but he is NOT going to ruin my damn Christmas!

So, despite politics, I will revel madly, enjoy friends and family to the utmost, occasionally hug my big Santa statue by the doorway, all with hopes that you can do some version of the same (the big Santa is pretty exclusive but, I tell ya, he's quite something!). And please know that--if you're reading this-- you're likely one of my circle, those with whom I vent, debate, inspire, exchange ideas, share important articles, post unimportant but utterly appreciated videos of pandas playing with snowmen, or just, in general, grant outlets and venues and canvasses upon which to commiserate. Our mutual and connected attempts to makes sense of this crazy world have literally kept me from feeling alone and insane during this "Annus horribilis," so THANK YOU from the bottom of my heart!

And Merry Christmas, dear friends. Let's make 2017 a year that "trumps" the year we've just had... in all the good ways in which that word can be applied. Let's reflect on the poem Dan Rather shared and make sure we are not those who "sin by silence." Let's be loud, and make COURAGE the word most spoken this coming year.

Until then, have a Christmas cookie... mmm, so good! ❤