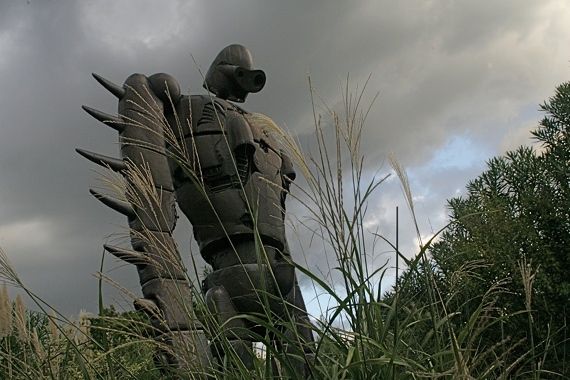 The Wind Rises may have lost the Oscar to Disney's Frozen, but Hayao Miyazaki and his famed Studio Ghibli animation studio aren't shedding too many tears. The studio won its own Oscar in 2003 for Spirited Away and was nominated again in 2005 for Howl's Moving Castle.

Thanks to films like My Neighbor Totoro, Nausicaa, Princess Mononoke and a huge body of work before creating Studio Ghibli, writer, illustrator and director Miyazaki is probably Japan's best known movie maker overseas these days.

In Japan, he is absolutely idolized. Accordingly, Studio Ghibli created their own museum -- sort of in honor of themselves -- and for the legions of fans wanting some real world encounters with their animated favorites. 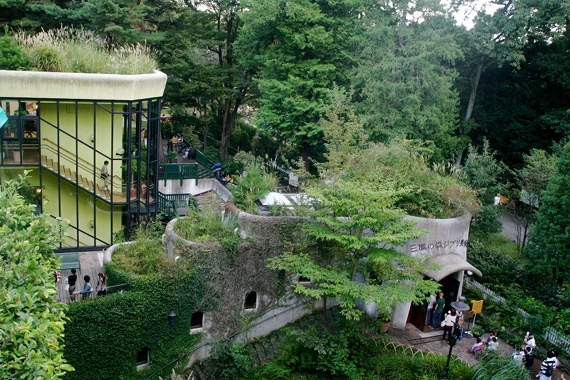 The museum is hidden away in a forested glade next to rambling Inokashira Park in Mitaka, about a half an hour from Tokyo proper. Ghibli Museum is packed everyday with visitors from all over the world. So crowded in fact, that you must buy your tickets in advance to enter. No tickets are sold at the door.

Let me repeat that.

No tickets are available on site. Each ticket must be purchased online and has an entry time stamped along with the date. Visitors must queue up outside waiting for their time slot. (If you are already in Japan you can download them via Lawson's convenience store ticket service, Loppy.) 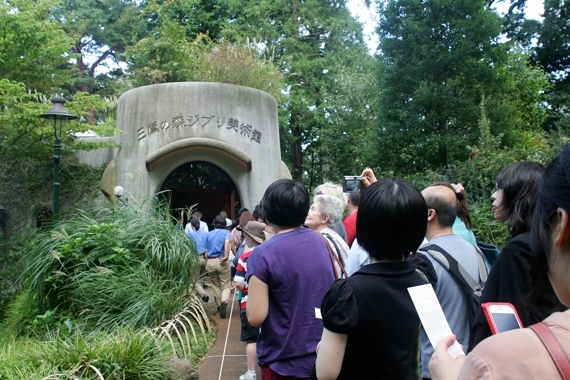 Queuing for your time spot at the museum entrance.

The interior of the main building is a maze of staircases, hidden rooms and passages which are great fun to explore. Beautiful stained glass windows illustrate pivotal scenes from many Ghibli movies. This building is connected via bridges to other smaller exhibition spaces and the restaurant. Unfortunately, you are not allowed to take photographs of most of these cool things. 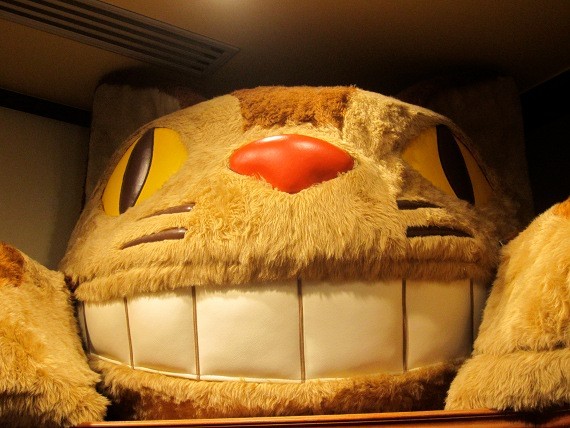 Japanese are almost obsessively possessive of their copyrights and Ghibli is no exception -- which seems rather pointless in a place like this.

One caveat, and this is important, is there are very few of Ghibli's iconic characters on display in the grounds. They pop up in small whimsical touches here and there but don't go expecting Disneyland sort of touches with people in character suits waiting to pose for pictures. Also no life-size statues of Kiki the witch with her cat Gigi or giant Totoro for selfies. They're not there. About the only thing for the kids to go crazy for is a giant stuffed Cat Bus from My Neighbor Totoro to climb on and in. 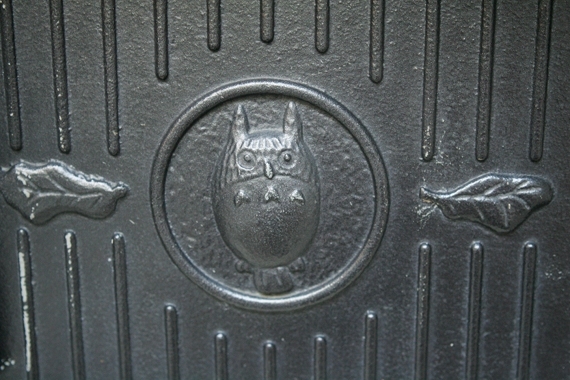 Outside on the rooftop garden everyone, and I mean everyone, lines up for one of the few characters it's okay to shoot: a striking robot from Laputa (Castle in the Sky).

Several major exhibits in the museum are really an homage to the illustrators at the studio. Personally, I felt most visitors are more interested in the films rather than the details of the artistic process and felt a bit let down.

Inside the main building is Mama Aiuto (mama help me!), the museum's souvenir shop stuffed with collectibles in every price range. 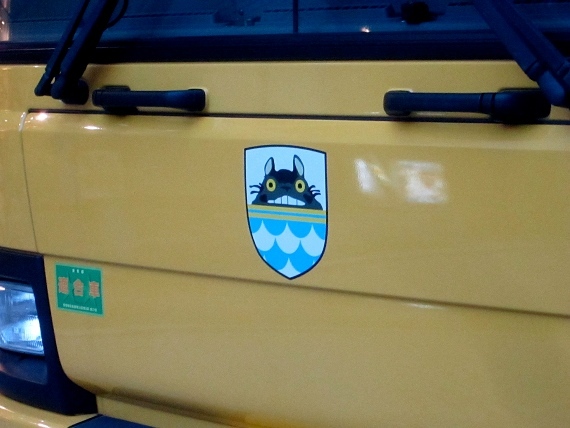 The bus to the museum is easy to spot...

Most visitors take the city loop bus to the museum from Mitaka Station. The bus runs all day from the South Exit of Mitaka Station, bus stop number nine. The last bus for the return trip is at 7:40 p.m. A roundtrip ticket costs 320 yen ($3.50). There is a helpful guide there most of the day to direct bewildered foreigners. Getting back from the museum takes a little longer. Since it's a loop bus, you need to ride the rest of the loop before it returns to the station. A taxi ride back will run at least 10 or 12 dollars.

The real question is if you have time to travel to Mitaka, can get your tickets in advance, spend time at the museum and then return. If you are a diehard Miyazaki fan, it will definitely be worth the trip. If you are more interested in collectibles and some fun photo ops, I seriously think you should consider going to the Tokyo Sky Tree branch of Donoguri No Mori, Ghibli's character boutique. 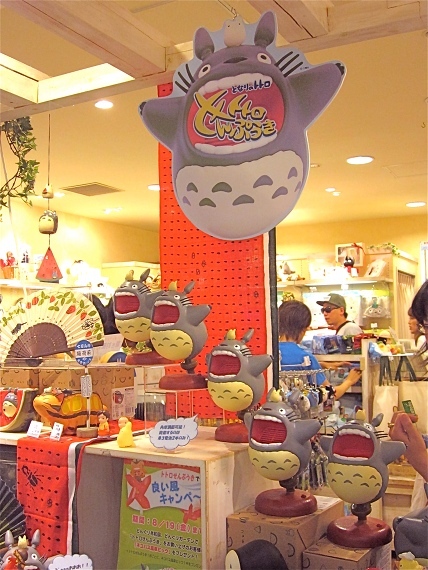 Display with Totoro at one of the Donguri no Mori boutiques

The Sky Tree store has oversized dioramas of select movie scenes, amazing store windows, just about everything the Museum store stocks and you can take photos. It's almost as much fun as going to the museum and much closer. 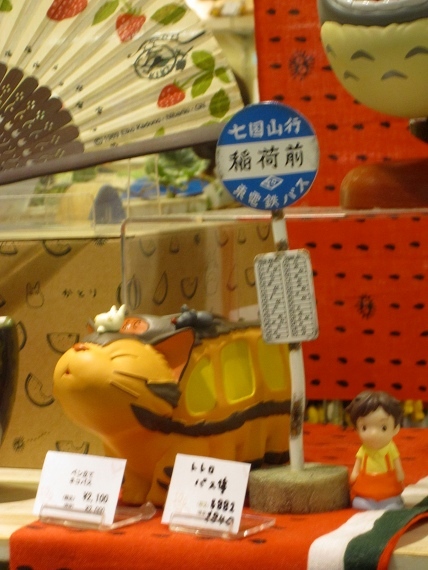 Ghibli Museum Access
The English website has a guide to the museum and some special features like the museum-only short film. Here's a link for reserving and paying for your advance tickets before or after coming to Japan.

Hours: 10-6. Closed Tuesdays with a few exceptions (see website). They also have the odd closing day for maintenance and also New Years so please plan accordingly. There's a calender for 2014/14 on the website.