Question: What do the president, the party leaders, all members of Congress, all the headline economists (both hawks and doves), the entire Federal Open Market Committee, and just about everyone else apart from Modern Monetary Theory (MMT) proponents agree on?

Answer: They all agree the U.S. has a long-term deficit problem. Therefore they all agreed to let the FICA tax holiday expire at the end of last year without any discussion, just as they let the sequester go into effect March 1 with no serious discussion.

Together these fiscal adjustments reduce the U.S. economy's income and savings by about $5 billion per week, reducing sales, output, and employment accordingly from where it would have been otherwise, which also increases the risk of aborting a fledgling private sector credit expansion, which would further hurt the economy.

And what have they gained by the pain inflicted by this proactive deficit reduction policy? Absolutely nothing of value. The 'national debt' is nothing more than a bunch of dollars balances in savings accounts' at the Federal Reserve Bank better known as 'Treasury securities.' These 'securities accounts,' as insiders call them, along with checking accounts at the same Federal Bank (called 'reserve accounts') and the actual cash in circulation constitute the total net dollar savings of the global economy, to the very penny. When the U.S. government spends more than it taxes, those extra dollars it spent first go into our checking accounts, and then some gets exchanged for actual cash as needed, and some goes into those savings accounts at the Fed called Treasury securities.

So how is 'all that debt' paid off? When Treasury securities are due, the Fed simply shifts the dollars from those savings accounts at the Fed to checking accounts at the Fed. That's all! And this is done for tens of billions every month. The debt is paid off by a simple debit and credit on the Fed's books. There are no grandchildren or taxpayers in sight -- they would only be getting in the way. There is no such thing as leaving our debt to our grandchildren!

What about interest rates? The Fed meets and votes on the interest rates it wants the government to pay on those extra dollars it created and put into checking and savings accounts by deficit spending. 'Market forces' don't grab Chairman Bernanke's arm and raise it to vote for higher rates. The level of rates paid by our government is entirely a political decision. The Fed has the tools to set both short- and long-term rates at any level it votes to implement.

Think of it this way. Congress has appointed the Fed as scorekeeper for the dollar. And just like any other scorekeeper it neither has nor doesn't have any dollars. It just has a 'scorecard' -- a giant spreadsheet -- with all of our bank accounts tied to it. It spends by changing numbers in our bank's accounts to higher numbers, and it taxes by changing numbers in our bank's accounts to lower numbers. Notice that the federal government therefore doesn't actually 'get' anything when it taxes or 'use up' anything when it spends.

Think of federal spending as printing dollars, and taxing as 'unprinting' dollars, which means there is no such thing as the federal government running out of dollars. And it means we can't 'become Greece' the way a U.S. state, corporation, or individual that doesn't spend by 'printing' can 'become Greece' and go broke. So if the U.S. can't run out of dollars, it is not leaving debt to the grandchildren, and it can never become Greece.

So you may ask, "Why not just go and spend like crazy and not tax at all?" In other words, what is the actual risk of too much deficit spending? How do we know if we have a long-term deficit problem or not?

Inflation! 'Overspending' would mean 'using up' all available resources in a fully employed economy and then trying to deficit spend even more than that. In that case all you do is drive up prices.

The good news is the world is chock full of credible, professional inflation forecasters who are paid to be right (not the fear mongering sensationalists shamelessly making wild, unsupported claims with no need to be right) and do a pretty good job of getting it right. And what were they saying about inflation before deficit reduction? The Fed had a 2 percent long-term inflation forecast and most all the others were pretty close to that. And the longer term U.S. Treasury inflation indexed securities also were presuming very low rates of inflation.

This means, even before any deficit reduction measures were taken, there was no long-term deficit problem!

And there still is no long-term deficit problem!

And wouldn't you think that at a minimum, before cutting the military, Social Security, and Medicare, the burden of proof would be on those claiming a long-term deficit problem?

But no, even without a long-term inflation problem, paradoxically, the burden of proof is on those claiming there is no long-term deficit problem, as we continue to destroy our economy and our civilization.

The graph below by Professor Stephanie Kelton sums it up. It shows that for the U.S. domestic private sector to carry a positive balance, the government must in effect carry a negative balance. A balanced budget, such as achieved by President Clinton, simply does not work. With Congress taking this budget cutting, balanced budget path, the one with one eye in the land of the blind becomes king. 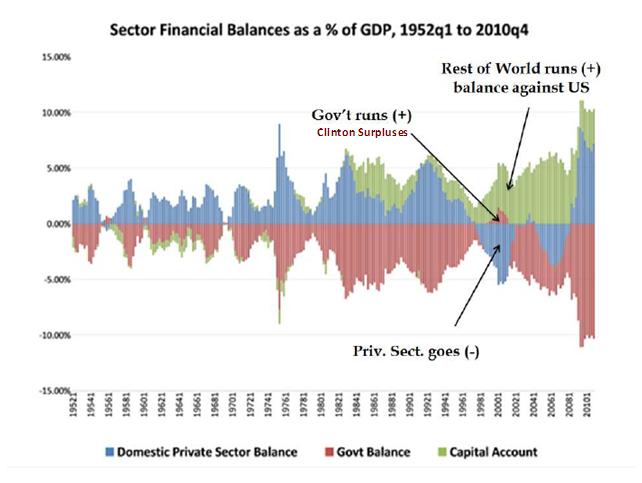