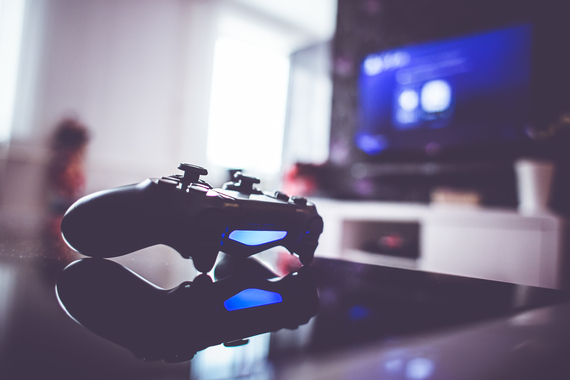 Were I charting my personal history of video games, I'd identify the '90s and early 2000s as the "no redeeming value" era. This was back when the principal effects of video games, at least according to news specials and my religious leaders, were to rot teen brains to gelatinous mush and convert them into school shooters. In fact, said gaming climate was so hostile I had to draft a 50-point business plan, replete with pie charts and animated PowerPoint slides, to convince my then-disapproving parents that purchasing a Nintendo 64 wouldn't set me on the pixelated path to middle school delinquency. Oh, and that one time I got caught playing Tetris at my sister's baptism? I sure set video game advocacy a few steps backwards in my household that day.

These negative gaming perceptions have been shifting, though. I first saw cracks in the old "video games are depraved" worldview when my 84-year old grandma sent me an email (!) inviting me to join her Nintendo Wii bowling league. Nowadays, seemingly everyone plays them. At least, that's my mental takeaway every morning at the sight of an entire subway car with heads bowed, bathed in the backlit warmth of their devices, thumbs a-flutter. I see a whole spectrum of games and players, too. The older ones often play rosy nostalgic titles àla retro-ports from the Namco museum, or plain old Solitaire. Younger passengers beat their thumbs into oblivion on high-octane shoot 'em ups or off-road racing simulators. The out-of-touch gamers blithely work their way through the now-passé Candy Crush.

An email from Grandma and a New York City commute aren't my only social indicators, though. A recent act in Netflix's House of Cards of all things, is what really hammered this cultural gaming evolution home. In the show's early seasons, protagonist Frank Underwood would unload his frustrations from a tough day on the hill by button-mashing torrents of lead 'tween the eyes of enemy combatants in "Call of Duty" campaigns. It seemed a fitting pastime for a southern-fried sociopath who'd literally stop at nothing to get what he's after, be that killing the neighbor's dog or laundering campaign money through -- well, I won't spoil it. Like many of the other millions of players engaged in multiplayer shooters, Underwood got off on the adrenaline fix these games offered, an on-demand cathartic opportunity to enact grisly, unspeakable acts on a worldwide network of other active gamers without any of the real-world consequences. Indeed, it's stuff like this that makes me wonder if any member of the security council ever proposed a leisurely LAN-session of Command & Conquer during the Bush administration.

Interestingly enough, while Underwood's subsequent political ascension didn't dull any of his personal edges, it did change his gaming habits. In the highly-anticipated Season 3 of House of Cards, we saw Underwood forgo his garish shooters to splay out on a White House davenport and plaintively tap an iPad screen in deep concentration. His game of choice became Monument Valley, a dazzling mobile title designed by USTwo studios, in which players must guide the "silent princess" Ida to varying destinations across a minimalist world of increasingly complex optical puzzles. Artful and decidedly non-violent, Monument Valley may seem an unlikely fit for a guy who'd just as soon have you thrown down a well as gush over some indie passion project.

Nonetheless, in a touch of "life imitating art," the mere appearance of Monument Valley in House of Cards quickly launched it to number one in the App store game charts, a clear indicator that a little presidential rub, even fictional, carries major weight. Besides serving a plot point I shan't divulge, Underwood's choice in Monument Valley actually showcases the evolving dynamic of mobile games in the fabric of our non-fictional society.

It's not just the novelty of seeing an "old" guy play a video game, as real-life presidents copping "youthful" things has been well-worn politicking territory for years. I'll never forget Bob Dole's dour face flickering across my TV screen in a strategically-placed "Rock the Vote" spot. Neither can I mentally erase the sight of Slick Willy Clinton, hair freshly dyed black and saxophone in hand, sashaying about Arsenio Hall's stage. The way I see it, if Obama was our first Sesame Street president, i.e. the first American President who conceivably watched the show as a kid, we can surmise that somewhere out there, our first "Limp Bizkit" president is finishing up graduate school. The future looks bright!

What Underwood really showed me is that, as much as video game audiences have diversified, so too have their purposes. Where games once existed as static console-based entities for specialized nerds to plug into, games are now an ubiquitous feature across all our devices, from our phones clear down to our e-readers. Sure, the big budget console shooters still do mega business, but on the next tier, a markedly universal one, these mobile games appeal to the everyman. Passengers languishing in our nation's airports use them to kill time. Parents foist them on fussing children to divert their energies. Art freaks and code-monkeys cop them for "research purposes," scoping the next best game developer to whom they'll send their resumes. Hell, some gamers even use them for physical therapy, or in that beleaguered House of Cards's President's case, political strategy.

Mobile game-supporting hardware, and the subsequent indie-game revolution, have levelled the playing field. One needn't have a background in console gaming, a World of Warcraft username, or a custom-built gaming PC to enjoy the fruits of this gaming renaissance. They're cheap (often free) for the taking, and available to virtually anyone on a mobile network to use in any capacity they wish: business, pleasure -- and even (fictional) politics.