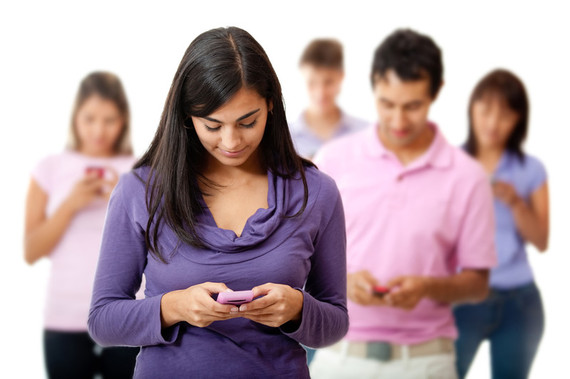 We've all seen zombies walking the streets. They've got that glazed look, faces lit with an unhealthy glow, stumbling into people on the sidewalk and walking into traffic almost getting run over, while their fingers twitch spasmodically in front of them. How can we have come so far that a small electronic device has become our best friend forever and turning vast numbers of young people into the living dead?

Jennifer Lawrence was my hero at the Golden Globes this week when she playfully chided a reporter who was asking her a question while looking at his phone (apparently checking the photos of her that he just made). "You can't live your whole life behind your phone, bro. You can't do that. You have to live in the now." And when the reporter continued with his question about the Oscars she responded: "We're at the Golden Globes. If you put your phone down, you'd know that."

Mobile zombies can come in all ages and from every walk of life. These are not exclusively the Gen Z youth who only know life on a mobile phone - it can be even ordinary people like you or I. I've see businessmen in expensive Italian suits walking around on their own in the city center talking out loud, thinking they are speaking to me until I spot a Bluetooth headset poking out of an ear. Sad to say, a number of the men with monologues don't have a headset and are just burned out workers from the financial sector! 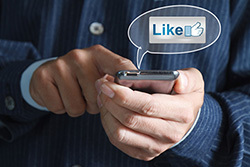 And with these devices so integrated into our existence new psychosis appear. Things like Fear Of Missing Out (FOMO) - that dreaded sensation that grips your gut when you discover you are an outsider, no more in the know - in other words uncool. You missed the latest trending topic and only found out a day later. This fear is also matched by the In Case You Missed It (ICYMI) syndrome when your tweet or blog post that didn't get enough likes requires you to repost it knowing all your friends and followers have dozens, if not hundreds of incoming messages, posts and website news feeds to compete with yours.

Some of us experience vivid sensual hallucinations like the ghost ringing when you're sure you've heard your phone ring. Then there's that highly recognizable chime of a new WhatsApp message that makes you drop everything and hunt for your phone only to discover another sound or your imagination triggered the illusion.
The other variation is Phantom Vibration Syndrome where 90% of mobile phone users believe at one time or another to have felt a phone vibrating in their pocket signaling there is message. Part wishful thinking and part conditioning. The professor at the Georgia Institute of Technology who conducted a recent study on this said it was due to a 'learned bodily habit' where the phone 'becomes part of our body'. In an interview with the BBC the researcher, Dr Rosenberger, said people were "just so anxious these days, because of

all of our different technologies have us on edge. We are more inclined to be jumpy and feel something in our pocket as a phantom vibration."

Gone are the good old days when mobile phones first appeared and different anxieties existed. Back then one friend observed a man on his own in a bar who was having a conversation - only problem was the signal light indicated the phone wasn't active. He was bluffing to show he had at least one friend he could talk to or more importantly that he owned such a novel device. When mobile phones first appeared in India they were the ultimate status symbol but beyond the reach of most people. This then spawned an industry of fake phones so you could buy a cheap copy and leave it on the table in a restaurant so everyone could see you were one of the elite and ease your status anxiety.

About a dozen years ago at a six-day long traditional wedding celebration for a friend in southern India the actual wedding ceremony took place in a hall with various family members, relatives and the family guru on stage. The bearded, white robbed guru couldn't resist talking on his mobile phone while the priest conducted the ceremony. Guess he had to show he was above it all and score a few points in the respect department but my friends and I agreed it was ultimately bad karma.

How can we free ourselves from this electronic slavery? One suggestion would be to leave your phone at home and take a long walk in nature and enjoy the quiet and solitude - while trying to ignore the withdrawals from missing out and phantom vibrations. Maybe J-Law was wiser than a Hindu holy man when she said:

"You can't live your whole life behind your phone, bro. You have to live in the now."