This last Friday, Democrats Abroad Argentina ("DAA") sponsored a "Debate-Watch" event at the Sacramento Resto Bar in the Palermo Hollywood barrio of Buenos Aires. (Palermo "Hollywood" for the concentration of television and recording studios that pepper the neighborhood.) When I saw the "Hollywood" location, I couldn't help but chuckle, remembering one of the more desperate and flailing ads of the decrepit McCain campaign (remember Britney and Paris?). A subconscious tweak, perhaps, on the part of the organizers? Maybe I was reaching, but it amused me all the same. 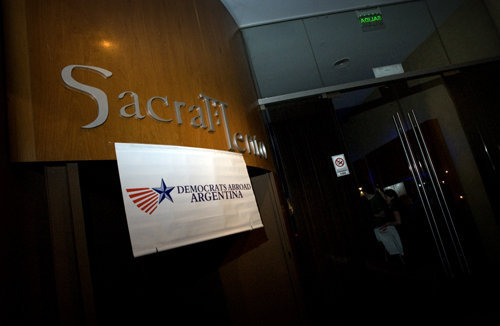 Arriving a little after the 8:00pm beginning of the event, my partner Diego and I checked our coats and I began to do some preliminary interviews of the 50 or so people who were milling around the huge loft-like space of the Sacramento. (It was still early, the debate wasn't scheduled to start for another hour or so and people were arriving in drips and drabs.) As luck would have it, the first person I approached turned out to be none other than the vice president of DAA, Meghan Doran.

Meghan turned out to be a great first interview. She was incredibly affable and articulate and provided a lot of background on the organization. She explained the primary objective of DAA: To get people to register and vote.

The process of registration can be confusing for ex-pats. Americans living abroad are registered according to their last address in the United States and therefore their ballot is counted in that state (even if they haven't lived there for 50 years). Because each state has different election procedures, either they are issued an absentee ballot (as in the case of New York) or, in some cases, have the option of voting via e-mail (as is possible in Iowa).

In the short time they've been incorporated, DAA has personally registered more than 260 voters and they calculate that through their direction to VoteFromAbroad.org, have helped to register countless others. "Obama has made unprecedented ad-buys specifically targeting the expatriate community, such as the ad on the Americans Abroad web site," Meghan told me.

Beyond that mandate, by staging events such as the Debate Watch, DAA is able to provide a sense of community for Americans that might not have another outlet for political interaction. "We want to make sure the voters are as involved in the process as they would be in the U.S," she offered. Meghan told me that with every successive event, their membership has grown impressively.

The Buenos Aires chapter of Democrats Abroad didn't gain full recognition until February of this year, and while they are asked by the international governing body not to give out specific membership information such as exact number of members, I was able to glean from another member that the membership is already "hundreds and hundreds."

The international body of Democrats Abroad was founded by committees formed in London and Paris during the 1964 election between Lyndon Johnson and Barry Goldwater. Their principle complaint was that simply because a citizen had taken up residency in another country (for work, school, retirement, etc.), either temporarily or permanently, such person should not have to sacrifice their franchise to vote. The two committees were successful in gaining recognition from the Democratic National Committee, but at that time, most states still did not extend the right of an absentee ballot to Americans living abroad.

Democrats Abroad was instrumental in securing voting rights for expatriate American citizens through the Overseas Citizens Voting Rights Act of 1975 and obtaining passage of the Uniformed and Overseas Citizens Absentee Voting Act in 1986. Jimmy Carter is the honorary Chairman.

Democrats Abroad is the official Democratic Party organization for the millions of Americans living outside the United States. We work to advance the principles of our Party by spreading the Democratic message to Americans abroad and encouraging them to vote for Democratic candidates back home.

Democrats Abroad has committees throughout Europe, the Americas, the Middle East, Africa, Asia, and the Antipodes. These Country Committees keep Americans abroad informed of their rights and help them participate in the U.S. political process. A small support office is maintained in Washington, D.C.

As I finished my interview with Meghan I noticed the crowd had already doubled and I began to take stock of the overall demographics of the attendees. I observed four general age groups; 18-30, 30-45, 45-60, and over 60 and they were pretty evenly represented. I interviewed different attendees, from the various groups to get some individual perspectives.

Generally speaking those in the over sixty crowd were retirees who had moved to Buenos Aires to take advantage of the amazing cultural offerings and quality of life. Both those in the 30-45 and the 45-60 groups, (like myself in the latter), had moved to Buenos Aires in concert with our Argentine spouses/partners, for business opportunities and/or because of a disillusion with the trends in American Politics. Most had been here between five and ten years. The 18-30 set were mostly exchange students or young professionals a few years out of college who were working to acquire foreign business experience. This last group, I got the impression, was the most transient, the average residency, being no more than 2-4 years. In all, I interviewed people whose votes would be counted in California, New Mexico, Kansas, New York, Massachusetts, Georgia and Florida.

When I finished with those interviews, I sought out the president of DAA, Mike Skowronek, to whom I had spoken a few days earlier by phone. He had been giving interviews to local and national television stations that showed up to cover the event and were providing live feeds to their stations. I realized there were live feeds when my sister-in-law called my partner's phone to tell him, with glee, that she was watching us on television.

I felt a little bad roping Mike into yet another interview, but he couldn't have been more agreeable. He took me outside to a little conversation area in front of the Resto Bar, because inside, the crowd of now over 300 people was almost deafening.

Mike is from Illinois, and is a 50 year-old, five-year resident of Buenos Aires. He moved after marrying an Argentine Alicia Blumencweig who was helping to organize and run this evening's event. He fit the profile almost exactly as I had come to define our age group (I'll be turning 50 this December, myself). Although not the principal reason, a factor in his decision to move to Buenos Aires was the present political climate in the U.S. "We could have stayed in the U.S., but we didn't; and that ultimately says something about where we feel more comfortable."

Mike, along with others including National Counsel Laura Atkins, Secretary Maria Ramirez and Treasurer Richard Tihany, with special recognition of the efforts of law students Danny Frost and Alexia Simon, started the process for inclusion in Democrats Abroad more than a year before gaining recognition in February this year "coincidentally, on Super Tuesday." DAA is particularly proud of its by-laws which include a true progressive hallmark requirement that if the president is a female, then the vice president must necessarily be male (and vice versa, as is the case at present).

I confirmed that voter registration is the key endeavor ("nothing more important") and to drive that point home, Mike told me "normally, we don't charge anything for these events, but this time we decided to charge a nominal 10 peso (roughly 3 dollar) cover charge. We'll probably take in about 3,000 pesos and if that goes to registering just one more voter in Buenos Aires, it'll be worth it."

He confirmed my four group demographic breakdown ("It's equally distributed, 25, 25, 25, 25") and told me that beyond the mandate to register voters ("of whatever party affiliation, by the way; we don't discriminate"), one of the more important endeavors is to help integrate the membership more fully into the local population. "A lot of Americans here live in a kind of bubble and whatever we can do to encourage more inclusion and participation in the 'Porteno' (native Buenos Aires) community the better."

Before we ended the interview, I asked Mike one last question about the amount of interest in this particular election and he offered "you know, if we ever get some actual office space, I want to put up a big -- I mean BIG -- like the size of that wall over there -- picture of George Bush with a plaque underneath saying 'Thanks, George. We couldn't have done this without you.'"

When the debate was about to begin, I realized the crowd had grown by at least another 50 people and moving around was getting difficult. I found Diego, wedged myself into a space between him and another attendee and when Jim Lehrer began the debate, the place went silent. While the studio audience in Mississippi was admonished not to react, however, there was no such restriction at the Sacramento in Buenos Aires. People regularly cheered and applauded the smart guy and booed the neo-con puppet.

In the end, the consensus was that everyone wished Obama had been a little more aggressive at times, but that he acquitted himself well. This was supposed to be McCain's big advantage (Foreign Policy), so a draw then became Obama's figurative win in most peoples' evaluation. Some hoped that McCain's nastiness showed through on enough occasions to offend even some of his most ardent supporters. In the next debate, a lot of people said that they want to see Obama get far enough under McCain's skin to provoke one of those rage attacks he's so famous for.

There are already plans for DAA to host the Palin/Biden debate next week at the same venue. If Friday night's attendance is any indication, in conjunction with the incredible growth the group is experiencing with every successive event, they may need to find a much bigger space.

K.J. Dwyer is an American living in Argentina with his partner

Power Could Be Restored Sooner Than Expected To North Carolina Station