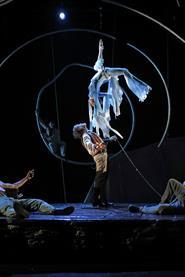 Founded in 1988 in Chicago by a group of Northwestern graduates, the Lookingglass Theatre is known for its innovative ensemble theater productions. In its adaptation of Herman Melville's sprawling novel, Moby Dick, the company has tackled the monumental challenge of translating an epic work into a couple of hours of stage time.

For the most part, the effort is successful, largely due to the skillful adaptation by director David Catlin, who manages to hit the key points of the story and also weave in the major thematic elements of Melville's opus. In his role as director, Catlin underlines the religious themes not only with key passages from the work, but also by using a chorus of three women to emphasize a divine, otherworldly tone.

Many of the theatrical techniques in this production are likely to be familiar to regular theater goers, including the use of billowing fabric to connote waves on the sea, or the circus-like acrobatics that increasingly show up in theatrical productions. Also there are traditional story-theater conventions that feel somewhat tired and overused.

However, working from a strong script and with an energetic cast, Catlin creates an engaging and sturdy formulation of Melville's work. A fine and piercing performance by Anthony Flemming III in the role of Queequeq, as well as an earthy and demonic interpretation of Captain Ahab by Christopher Donohue, provide the emotional thrust of the piece. Jamie Abelson as Ishmael is solid as the witness to the devolving madness aboard the Pequod. The set by Courtney O'Neill, which is built around the abstracted skeletal form of a whale, punctuates the ongoing metaphor of the play.