When I went to the opening of MOCA's "Art in the Streets" show back in April I had no idea they were not only changing the landscape of art history but also partnering with Levi's to bring creative tools to the local community in Los Angeles.

For me, film, fashion, food and art are equal necessities for life and I'm pretty impressed with the way MOCA and Levi's have weaved them all together. I took a tour of the Levi's Film Workshop Collaborative Film Projects at the downtown MOCA space recently and was blown away by the facilities they have available for FREE to the public during the "Art in the Streets" retrospective.

You can do everything from edit your film on Final Cut pro to transferring your old Super 8 films onto DVD with the help of trained staff that can show you how to work stuff if you don't already know. The workshop includes collaborations with artists from the show as well as educational workshops with special guests from the worlds of street art, skateboarding, food and music that cover everything from found footage and direct animation to stunts and 3D.

This is the third in a series of creative workshops Levi's has taken across the country after launching in Spring 2010 in San Francisco in conjunction with the brand's "Ready to Work" Go Forth™ campaign. In New York, they did a photo workshop based on the same idea of bringing local communities together through the creative process and access to professional tools. Their efforts have not gone to waste and when I was there on a weekday afternoon the studio was packed with students, locals and artists, all taking advantage of the equipment and resources provided.

Throughout the past few months they have also hosted a series of film screenings and Thursday, July 14th they will premiere three short films as part of their series called "The Hunger" about growing, preparing and serving food to celebrate the local culinary movement.

As part of the Workshop's Film & Food installment, gallerist and "Art in the Streets" associate curator Aaron Rose worked with Randall Poster on a short film entitled Wild Goodness which focuses on the Margaret Kilgallen Memorial Farm (built outside the Workshop at MOCA), a site-specific edible "bike farm" that includes organic fruit and vegetables and utilizes a combination of traditional planter boxes and mobile planters on bikes. Margaret Kilgallen passed away in 2001 from cancer, but she is one of the few women whose work is included in the"Art in the Streets" show.

Local culinary pioneers bringing healthy food to the streets of LA, including Chef Ludo Lefebvre, Chef Roy Choi of Kogi and Tara Kolla of Silver Lake Farms, will be there on July 14th preparing dishes from their respective kitchens like the infamous Kogi Truck, which launched the food truck revolution here in LA and subsequently around the country. Chefs Suzanne Goin of A.O.C. and Lucques along with Vinny Dotolo of Animal Restaurant were amongst other local food world celebs that conducted workshops and special events as part of this final collaboration. 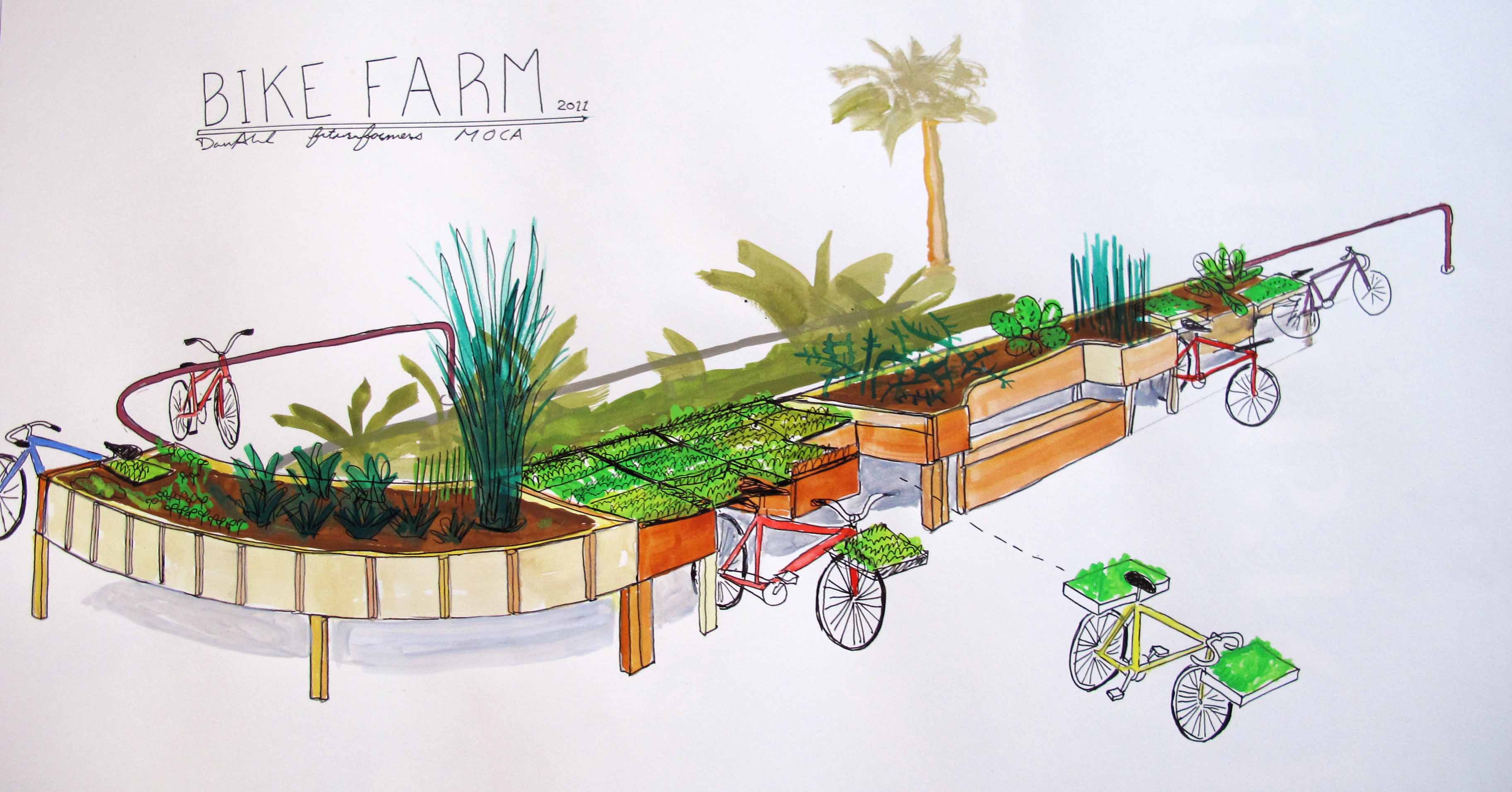 The Margaret Kilgallen Memorial site-specific edible "bike farm" that includes organic fruit and vegetables, built outside of MOCA, above.