Click here to read an original op-ed from the TED speaker who inspired this post and watch the TEDTalk above.

My hips are two inches too big for me to pursue my dream.

That's what I was told at my first interview with a modeling agency in 2005. I sat with the agents for an hour, fresh out of university, but already with years of experience in other arenas, from research in toxic organic contaminants in sewage sludge to mine reclamation. I had also been concurrently working on a project called Organic Portraits, a photo series (to be published later this year) with photographer John F. Cooper that uniquely tied together the worlds of fashion and environmental activism. This work led to a larger idea: Was it possible to use modeling as a platform for spreading awareness of environmental issues? And even more, could I use my place in the modeling ranks to strictly work with companies that share in my values?

It seemed promising but for a newbie, everything was so untouchable, so elitist, so entrenched, and unequivocally mysterious. It was a few good people and businesses along the way, however, that made me think it could become a reality. I even met models who shared my vision, including Angela Lindvall, Kate Dillon and Mak Gilchrist.

I was excited to share my ideas of bringing sustainable practices to an industry that seemed devoid of that value set. I figured that if I could work strictly with brands and projects that were making that vision a reality, we'd all be able to move the dial forward. The agents listened to my big-picture plans, and at the end, one of them looked me squarely in the face and said, "Well, you know 80 percent of the jobs won't be available to you because your hips are two inches too big?"

I couldn't believe that anyone who understood my vision could think something so superficial. I remember exactly how I responded: "If you think for one second that two inches on my hips are going to stop me from doing what I want to do, then you are sadly mistaken." The agency signed me on the spot.

The fashion industry is filled with all kinds of people -- some of whom have maintained the status quo and others who have the courage to shift it. The industry encourages models, agents and even designers to think inside the box and isn't used to embracing and cultivating what is unique. But while one agent may not see your vision, perhaps another will.

In my case, I ended up leaving the first agency after a year. It was like one of those break-ups with a boyfriend that just should have happened months before but dragged on like a muffler behind an old car. Two weeks earlier, I'd excitedly told my booker about my meeting with the president of a large cosmetics company, to which he responded, "But we don't even meet with presidents of companies." I shrugged and said, "Well, then I guess you're not doing your job."

That comment might have incised my booker's ego a bit too much because suddenly my comp card was nowhere to be seen on the wall. He sat me down and spoke about how the industry has changed over the years -- gone were the days when girls had multi-decade careers. "The industry looks for the fresh faces this season -- and the next season it's onto another bevy of girls," he said.

Then, my booker turned and looked me directly in the eye and waved his hand across the wall of willowy young women: "See all these girls, Summer? If these girls don't marry rich within a couple seasons, they'll never get anywhere. Some will have to go back to the countries that they came from. But you... you're different. You're going to make something happen."

That's when we broke up.

The parting was more than amicable; and if anything, it felt good that they were personally supportive of that "something I was going to make happen." But it still felt scary trying to figure out how I was going to do that on my own.

I decided to take the risk to establish my own company and my own career. This of course didn't come without it's pain either. I vividly recall crying in the corner of my bedroom in September (during fashion week nonetheless!) when the world seemed all too heavy.

It wasn't until years later that I signed with Next Models, whose shrewd owner, Faith Kates, just seemed to "get it." By that time, I already had a book deal, a campaign and a contract with a television network. Together, we have found that there is a wide range of clients who can be encouraged to think and act differently about sustainability issues. In many ways I have become a close collaborator with my clients, often meeting with C-Level executives, which is not a common occurrence for most traditional models.

One day, Faith told me I was going to see Tommy Hilfiger, so I dressed up in my cool street clothes. When I swung by the agency, she gave me a disapproving look. "Couldn't you have put on something more professional?" she asked. I didn't realize that I was going to meet the Tommy Hilfiger.

I've had the pleasure working with over a dozen well-known brands -- ranging from Payless ShoeSource to Discovery Networks -- to help them develop and market sustainable product lines and programs. Last year, Toyota told me that the designers and engineers were so inspired by my work that they secretly used me for the inspiration behind the new Prius C. This year also brought a gig for the Pirelli Calendar, which is arguably one of the most coveted and "sexiest" jobs a model can book. The photographer (Steve McCurry, of Afghan Girl fame) selected 11 women -- ranging from their early 20s to late 60s -- focused on environmental and humanitarian projects. Suffice to say that at the press conference, the questions went far beyond the typical "What else do you do besides modeling?" 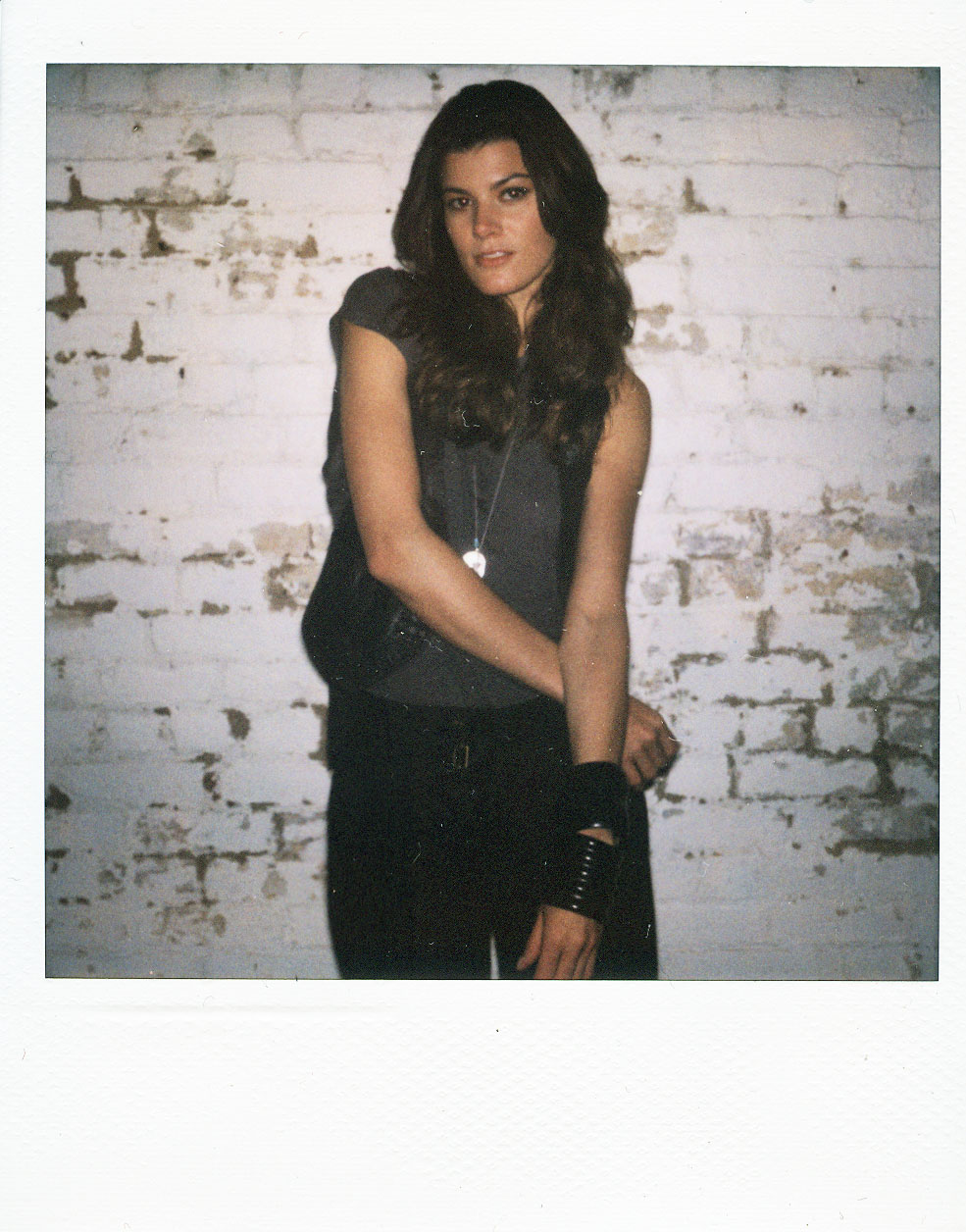 In fact, after over half a decade in the modeling industry, it was only last month that I was first asked to a casting call based entirely upon my comp card. I shared a laugh with my agent. "I told them about all the other entrepreneurial and environmental endeavors you do too," she assured me.

This type of casting is not unusual for an industry highly skilled at capitalizing on the genetic lottery, as Cameron Russell so aptly states in her TEDTalk. Comp cards, like a photogenic business card, are how most models are initially casted. Walk into any agency and a smorgasbord of young ladies and men are wallpapered around the office. A typical comp card features a head and body shot and measurements, including height, bust-waist-hip, dress and shoe size. So when a client calls up an agency (to what my one friend once described as a "trading room floor for pretty people"), the agent can easily find all women (or men) who fit the client's specifications. "You want blonde, blue-eyed and between 5'9" and 5'10" at 34"-24"-35" with no tattoos for this Thursday? Right, we'll send some of our new girls too." 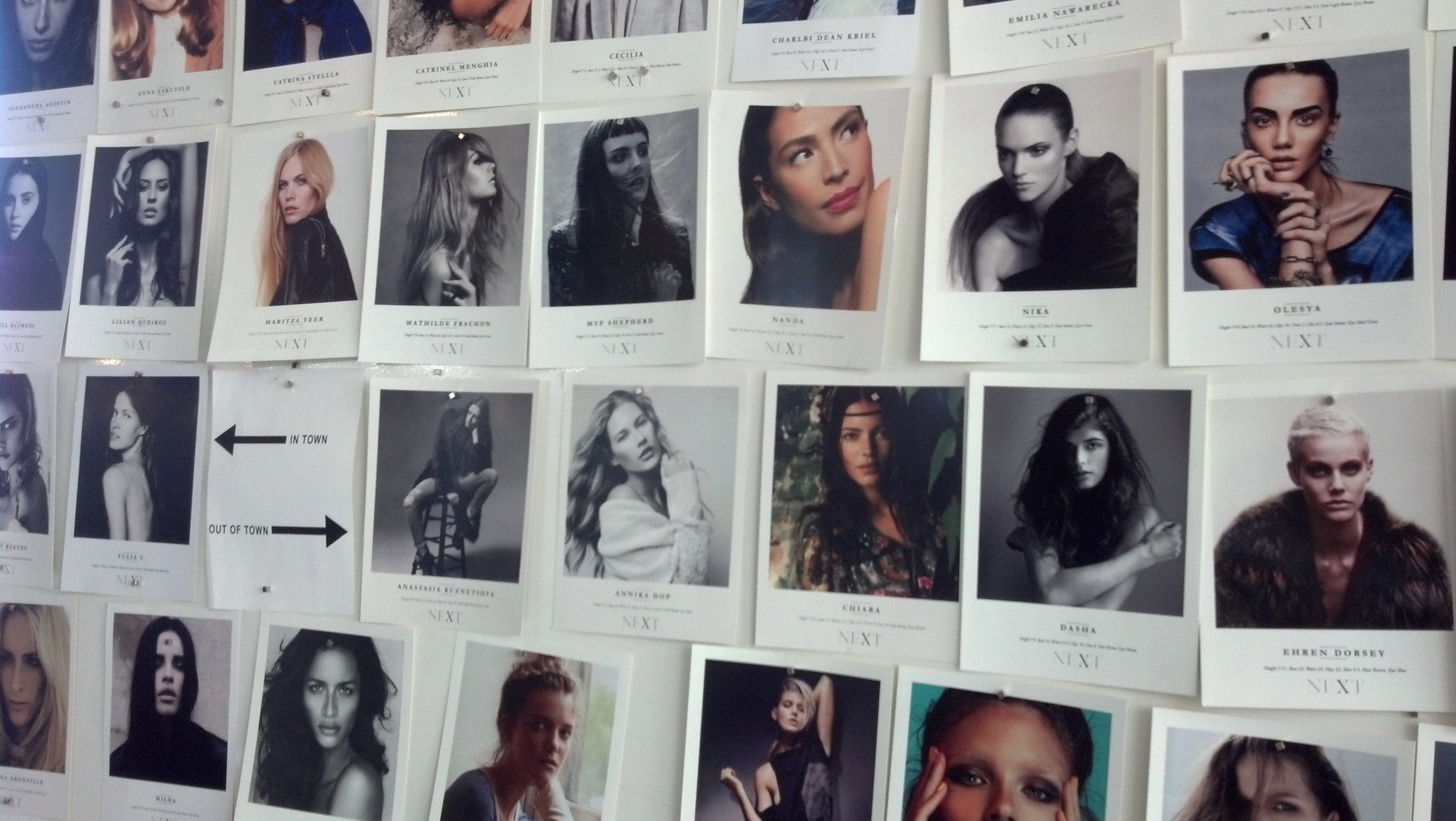 "Comp" cards covering the wall of my agency.

But what seems to be an impenetrable and immutable industry actually isn't. I've found through my own work is that it is by far one of the most responsive industries to change, if one has the desire. Granted that changing mindsets might be hard -- and you might have to strip down to your bra and panties for the occasion (I've had to do that too!) -- but character, confidence and fortitude always shine through. The casting call that requested my comp card quickly went from looking at two-dimensional images in my portfolio and answering puerile questions about the star I'd most like to make out with (I said Hugh Laurie and Hugh Jackman) to a half-hour discussion about honeybees and colony collapse disorder.

There are still major issues and insecurities across the industry -- from inequities around race to body image (a forthcoming article and conversation that I will share here between Kate Dillon and myself later this week), but I cannot stress enough how these conversations and practices change when people have the audacity to speak their mind and say "no" to working with certain clients. I only wish more models would do so (Abercrombie and Fitch, anyone?).

I can't help but play back the scene of my former booker telling me my hips were too big for the industry. It really encapsulated the moment when I realized that people are just scared to embrace something different. You can imagine, then, how meaningful it was to get an email from him two months ago telling me that he was proud of me for sticking to my guns.

The less obvious path is often the hardest. It's also the one, however, that reaps the greatest rewards. In the fashion industry, you have to choose not to objectify yourself if you don't want people to objectify you. I've made it known to my agent -- and in turn, my clients -- that I am far more than the sum of my parts. To models, I say this: It is your intelligence, your resolve, your character -- your whole beauty -- that distinguishes you. Don't shrink because it's what you think the industry wants from you.

We need not be bystanders or passive players in this game.