Marriage equality is already a reality across most of the United States, and I'm not just talking about the law. Now that 36 states have legalized same-sex marriage -- and one regressive appellate opinion has upheld bans against it in Ohio, Kentucky, Michigan and Tennessee -- the U.S. Supreme Court has finally agreed to decide once and for all whether or not the U.S. Constitution guarantees every American the right to marry whomever he or she loves. But no matter what SCOTUS comes up with this June, the social practice of marriage has already evolved before our eyes in irreversible ways -- for all couples, gay and straight alike.

I wrote Modern Brides & Modern Grooms: A Guide to Planning Straight, Gay, and Other Nontraditional Twenty-First-Century Weddings with this cultural landscape in mind. I wanted a book to exist about the new paradigm of marriage, a book that acknowledges we have hit the reset button on marriage and that explores how we are all more alike than different in the ways we form bonds. 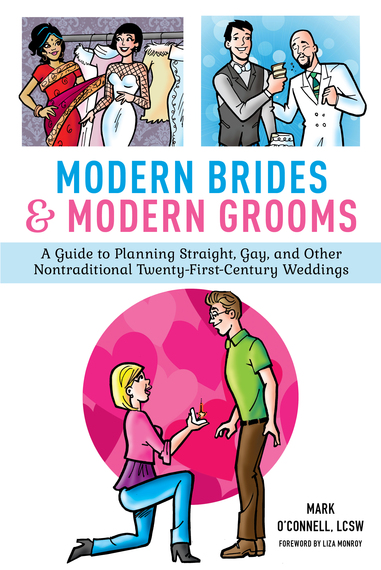 As a culture, we are all demanding from our marriages more freedom, creativity, room to try again, fail again and fail better (to parrot Samuel Beckett) than ever before. I wanted this book to provide context for our modern marital practices and to serve as a resource guide, a relationship navigator and a collection of brazenly truthful first-person accounts (from my own life and the lives of many other people, of both sexes and of all shapes, colors, sizes and orientations). It's a book for absolutely all who want recognition for who they are and whom they love, and who want to stay connected to their relatives and friends at the same time.

Last year, shortly after SCOTUS struck down the key parts of the Defense of Marriage Act, I was offered the chance to write a "same-sex wedding guide." Grateful as I was for the opportunity, and despite my awareness that niche marketing is generally a clever way to do business, I had to say no. For me to write such a book would feel like a lie. It would suggest that the progress of the marriage equality movement, both legally and socially, could be summed up tidily with two distinct categories of marriage -- "the gay" and "the straight" -- and that each category would have its own set of rigid, normative expectations. That just isn't true.

On the contrary, the transformative outcome of the marriage equality movement -- of same-sex couples fighting to be recognized -- is that marital practices are now getting freshened up for everyone, with a queer perspective. This paradigm explodes categories that restrict us and in their place offers a great deal of freedom, recognition and equality to every committed couple (gay or straight). (I've written articles on this topic for Psychology Today and The Huffington Post.)

For one thing, couples of all stripes now choose to be married, with eyes wide open, rather than sleep-walking through the steps dictated by tradition. Every modern couple's choice to wed has the same awakened passion and verve as those of the same-sex couples who fought for decades to have their love recognized in the face of major adversity.

Marriage equality has also demolished gender-role stereotypes in all of our relationships, allowing equality and harmony between partners as they collaborate on where to live, negotiate career ambitions and do family planning (however "family" is defined). And then there's sex: We are able to be more open, transparent and accepting of our sexual needs than we have ever been, and married couples are now provided more space to communicate and negotiate sexual practices and to seek advice and support to facilitate these processes when necessary.

The idea of transparency is perhaps the greatest bit of wisdom we all have gleaned from the experiences of same-sex couples. We all have learned to come out of the closet, if you will, about who we are and how we love, to close the door on shame and to ask for help when we need it. When we remove the pressure to be perfect or to meet society's expectations for what our marriages and families should look and act like, we make room for the possibility of making them work better.