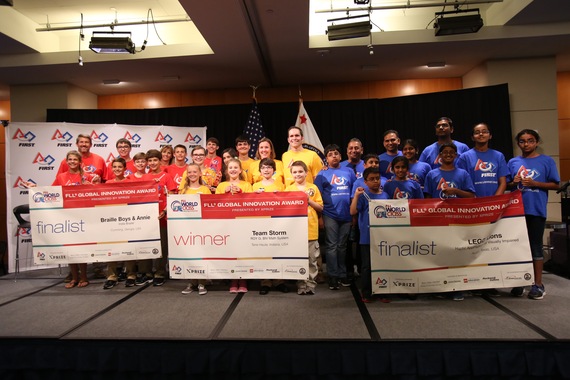 (From left to right) One of the 2015 runner-up teams, Braille Boys & Annie, the winning team, Team Storm, and the second runner-up team, LEGO Lions.

Filing for a patent can be a daunting process: the paperwork involved is so loaded with legal jargon that hiring a patent lawyer or taking patent law classes is suggested; picking and choosing a filing strategy is often a confusing and expensive mess; even deciding which patent category your invention falls under can be bewildering.

Bottom line: the patent process is a nightmare for an adult, let alone younger patrons.

Fortunately FIRST--an organization dedicated to bringing STEM programs and activities to young students--is giving middle schoolers an opportunity to invent and patent their own designs without any of these obstacles. One of its four major programs, FIRST Lego League, has been bringing middle school students LEGO MINDSTORM technologies to design, build, and program autonomous robots since 1998. Quite recently, FIRST expanded the program with the FIRST Lego League Global Innovation Award contest, which gives Lego League teams the opportunity to create and submit their own invention.

A team of expert judges had to narrow down the 500 submissions this past year to three finalists. These three teams had the opportunity to travel to the U.S. Patent and Trademark Office (USPTO) in Alexandria, Virginia for a special ceremony. Additionally, in order to further develop their inventions, the winning team received a $20,000 cash reward, and the runner-ups received $5,000 each.

The award contest first began in 2011. That year a team composed of six middle school girls--named the Flying Monkeys--swept top prize with their prosthetic hand invention. After more than 180 hours of research, these six girls designed a device made out of moldable plastic. The invention--called the BOB-1--immediately went to use for three-year-old Danielle Fairchild, a toddler born without any fingers on her right hand. Aided by the Flying Monkeys' prosthetic hand, Danielle is now able to write letters and draw in her coloring book.

"This was a project-based learning opportunity on steroids. Watching a FIRST LEGO League team brainstorm, create, problem solve and recreate is all that most coaches get to see happen. This is where the team, the Flying Monkeys, took the road less traveled. The FIRST LEGO League Global Innovation Award allowed them to continue that path and see what happens further on down the road. The girls worked hard, putting in countless hours to learn so many new things with a singular goal: patent their invention, the BOB-1. The outpouring of support in what they were doing was magical. I often had to sit back and marvel at all the encouragement from the various entities. Everyone was so excited and yet the girls were immune to it all. The girls enjoyed what they were doing and it was infectious. There are no words that can adequately describe the joy and pride I had watching them grow and learn."

This past year's winner, Team Storm, created a software application that targets helping students with dyslexia learn math concepts. By color-coding each digit in any math operation, children will recognize if they incorrectly perform math computations because the color pattern will also be out of order. The invention--named the ROY G. BIV Math System--could also help students struggling with dysgraphia (an inability to write coherently) or dyscalculia (a difficulty in understanding numbers).

"My favorite part of developing our invention was getting to meet with children and adults who struggle with dyslexia." Wrote Devon Langley, age 13, of the winning team. "We learned that they are really smart and creative people, and this motivated us to create something to give these kids more success with math and maybe even get them more excited about STEM. These creative kids may become the innovators of tomorrow if they are given tools that help them succeed today. We visited Pinnacle School, in Bloomington, Indiana, a school that specializes in dyslexia. The children there gave us really great feedback that helped us tweak our app so it will be more effective for them. This visit really made us better understand their needs. I enjoyed that part of the process, and I really hope our ROY G. BIV Math System will help those kids!"

The two runner-up inventions this year were designed by the teams Braille Boys & Annie and LEGO Lions. The Braille Boys & Annie invention included a sound module programmed to help visually impaired students learn braille without the aid of a teacher. The LEGO Lions' application platform was also designated to the visually impaired in helping them visualize graphs, curves, shapes, slope fields, and other math concepts through haptic feedback on touch screen devices.