The enterprising owners of the Raleigh Architecture Company, one of the North Carolina city's newest design firms, could have waited for clients to beat a path to their door.

Instead, they built a better mousetrap.

Actually, they built two -- side by side, in up-and-coming downtown Raleigh, on infill lots. 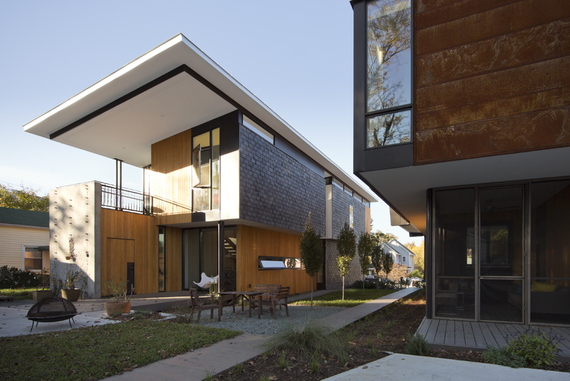 "We played developer, contractor, architect, and owner on these," says firm co-owner Robby Johnston. "We planned on building one of two homes for my family, and finding a client for the other."

They may differ on the outside -- one's clad in Corten steel, the other in recycled roofing slate -- but they've got a lot more in common elsewhere.

"Conceptually they're fraternal twins, with shared but individual characteristics," says Craig Kerins, also a co-owner in the firm. 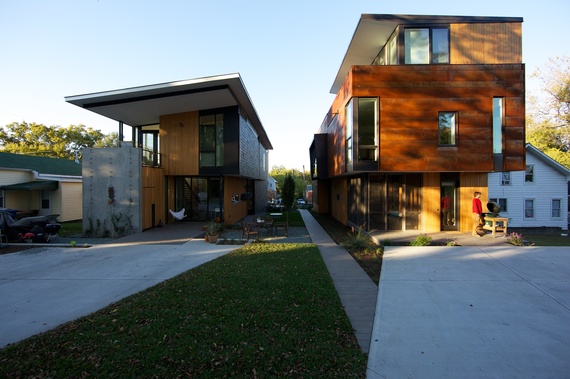 The two projects were custom-designed for each family, with a shared courtyard extending to the rear.

They also share the same massing and scale, on identical footprints. They both use a common cypress from Travis Creek Wood Products in Columbia, North Carolina, and each features front and rear porches to activate outdoor spaces on lots 35 feet by 100 feet.

"It's a very urban problem to fit all that on the lot," Johnston says. 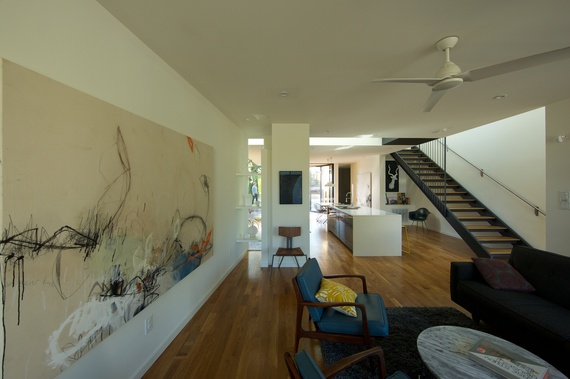 Before the architects designed anything, they surveyed their neighborhood on Edenton Street, discovering a wide variety of design styles, with 90 percent of the housing stock made up of single-family homes set back 15 feet. Their new homes conform to that.

"They hold the street edge and definitely fit the scale and rhythm," Kerins says. "There's a lot of topography, with highs and lows, and they fit well into the contextual factors."

The neighbors approve -- with some commenting on the pleasing sounds of children playing in the neighborhood, not heard in 30 or 40 years. 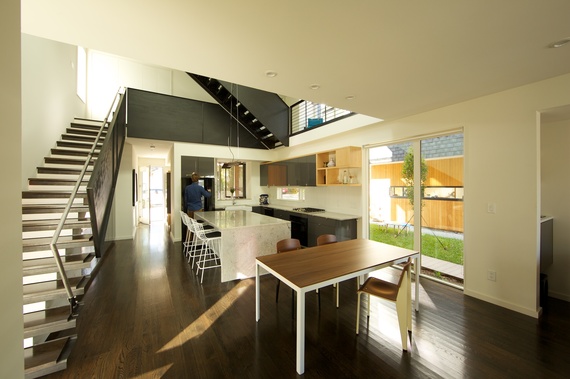 The biggest sign of their success, though, is coming in the form of commissions for new homes a block away.

"We've got three more houses, one block over on New Bern Avenue," says Johnston. "They're infill for vacant lots -- one will be finished in six weeks, and another in four months."

It seems that downtown Raleigh, once a sleepy little Southern Mecca, now owns a ravenous appetite for contemporary design.

J. Michael Welton writes about architecture, art and design for national and international publications. He also edits and publishes a digital design magazine at www.architectsandartisans.com, where portions of this post first appeared. He's also the author of "Drawing from Practice: Architects and the Meaning of Freehand," due out this spring from Routledge Press.