What would you tell your teenage daughter if you suspected her new boyfriend might be gay? Would you sit her down and explain complicated issues of identity politics? Would you pull him aside and ask him yourself (even if you realize he may not understand what it means to be gay)? Would you tell her nothing and hope she doesn't get hurt? Claire (Julie Bowen) faces this dilemma in tonight's episode of Modern Family (a rough cut of which I previewed last week).

Jay (Ed O'Neill) and Gloria (Sofia Vergara) are hosting a yard sale as a school benefit, and each of the families are pitching in. Alex, Claire and Phil's 14-year-old daughter, wants to invite her boyfriend Michael over to help. Claire is hesitant because, as she says, she likes him but she's "90 percent sure he's 100 percent gay" and that he "plays for the pink team." When Michael arrives at Jay and Gloria's in flames, so to speak, Claire seeks the advice of her gay brother Mitchell and his partner Cameron. 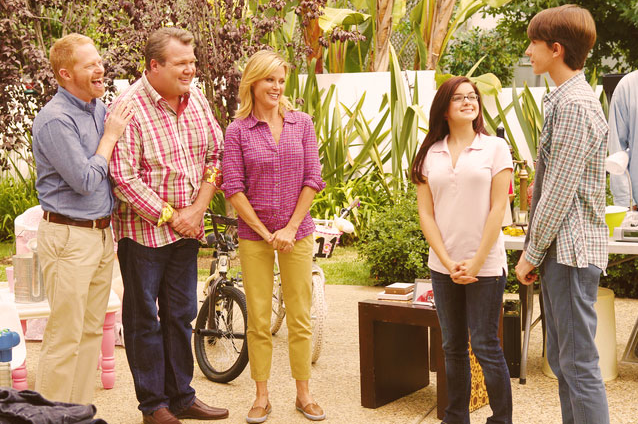 They assure her that the nature of masculinity has changed, something the story clunkily ties to Phil's endless pursuit to impress his father-in-law. Gay men are much more difficult to identify, Mitchell says, because "they care about their clothes, they groom, everybody's hairless..." but after Michael greets them saying only, "Hi," they abandon their new-world ideologies, "Yep, he's gay; we stand corrected."

Ultimately, Claire insists that Cam and Mitchell "teach" Alex how to spot a homosexual, and although she's convinced he's straight, she decides to take their advice and ask Michael herself. "Michael, I have to ask you something. I want you to know it's okay either way but, are you gay?

Representing effeminate heterosexual masculinity in such a character could be a really transgressive move for ABC. But we know Modern Family; we're familiar with its tropes, we know where it's headed, and given that people like Ann Romney are watching, we know that ultimately, this kid is going to come out, and Claire will feel vindicated and right in challenging him on the basis of his sexuality. "If [Alex] wants to get her heart broken by a gay guy she can do so when she's 18 or 19 and can drink her way through it."

I want to preface by saying that I love Modern Family and although on the surface, this situation feels not unlike any other wacky scenario (moments of it are funny), it's also quite a dangerous scene for questioning LGBTQ youth because of the way it makes it okay to subpoena a young person's sexuality in the name of protecting one's family -- of standing your ground. Perhaps the scene is even more insidious given that it is funny.

Its danger comes from the ways in which it breathes new life to the old association between gayness and deceit... that homosexuals who are not out, open, and honest with themselves and with the public are living a secretive life that could pose heterosexuals harm, and that's where the buck stops. Our culture has a coming-out imperative. Just look at the way closeted gay stars were harassed and bullied by the news media until they came out (often before they were ready). But young, vulnerable teenagers growing up in homes that don't understand what it means to be LGBTQ -- very likely homes that are watching this exact episode of tonight -- will see it and be informed by the situation as if it were reality.

People are quick to tell media scholars that they're just "reading too much into things" -- but the programs that people watch every night are constantly informing their opinions and views about the world. You might feel as though you have an idea of how an emergency room works because of Grey's Anatomy or how the CBI works because of The Mentalist. We use television to color in what we don't know about the world around us, and television, in turn, changes the world around us, particularly when it comes to representations of LGBTQ folks (as with the discursive cultural shift that happened after Ellen came out). Given this awesome responsibility, I would think writers and producers would want to exercise extreme caution when representing gay youth in such a tempestuous time of bullying and suicide.

You can imagine my disappointment, then, when I recently asked Modern Family writer and co-executive producer Ben Karlin if the writers read or are concerned with the many issues queer viewers have lodged against the show.

It's kind of insulting to say that, we're going to depict a gay couple so therefore it has to speak for all gay couples. [...] Any member of a community that is underrepresented on television, sometimes their [...] sense of humor kind of ends at the shores of their own self interest. So, we don't really put too much stock -- the barometer that you use is really your own point of view and your own sense of decency.

This is the kind of pre-packaged response you'd expect from any currently working media professional: writers, producers, directors, etc. If you don't like the question, as the old adage goes, change it. Gay representations will always already be problematic, that much is true, and you can't please everyone, duh. But critiques of Modern Family by the LGBTQ community are not few; even Mark Harris over at Entertainment Weekly recently wrote how tired he was of TV shows trotting out the same trite archetypes year after year.

I think I would have just been annoyed if he had said they don't take the time to read critiques of the show. But to then insinuate that underrepresented communities don't have a sense of humor and in effect, really need to "lighten up" -- that was truly insulting. Particularly given that later on in his speech he mentioned that the gay writers in the room and the straight writers in the room had a heated debate over this particular scene given its cultural and social relevance.

It used to be that we, as a public, could hold networks accountable and responsible for the ways in which they represent minority characters. Indeed, historically the government has had to drag commercial American television past its bottom line when it wasn't serving the public's best interest. But given the way in which Reagan pounded the final nail into the coffin of regulation, can we still do that?

In the early days of broadcast, the airwaves were flooded with amateur radio enthusiasts eager to make their voices heard. To tame the chaos, the United States passed the Radio Act of 1927, which implemented a licensing, programming, and regulatory framework that contained broadcasters to their government-assigned frequencies and time periods. Because the electromagnetic spectrum over which broadcast is transmitted is a limited resource -- but one that belongs to the public -- the Radio Act included a provision that networks (radio and later television) had the duty to create programming that served the public interest since the public had surrendered control.

This "trusteeship" model of broadcast carried through to the 1980s when, with the advent of cable and satellite, networks began to be "let off the hook" in terms of programming responsibility. This was particularly salient with news media, which had been held to high standards of objectivity, reporting stories of serious concern for the country, that Reagan-era deregulation broke down, resulting in the commercial, sensationalistic news climate we are used to today.

Although what counted as the "public interest" was always contested, scripted programming was also responsible for what it broadcasted into America's living rooms. Networks had the responsibility of serving the public's interest, and although TV in the '50s, '60s, and '70s was far from a paean of progress, the public could always contest a character or a representation based on that "best interest" philosophy. But can we anymore?

Are writers of our current television fare no longer held accountable for the characters they create? Do writers of popular network television shows no longer have a social and cultural responsibility to serve the public's best interest? And with such representations, are we laughing at the LGBTQ characters or with them?

Toward the end of the episode, in order to console Claire, Cam tells her that the situation reminded him of his first girlfriend, and how he arranged a beautiful corsage for her, "It was gorgeous," he says. "'Til she pulled it apart and spelled homo on my porch."