The face of US Post War urban planning was irrevocably changed with the pedestrian mall -- among the earliest, Fresno, California's Fulton Mall in 1964. This pioneering attempt at revitalizing a city's center was one of more than 200 urban pedestrian malls constructed in North America from 1959 to the mid-1980s. Midway through this period, educator, author and landscape architect Harvey Rubenstein, in his comprehensive 1978 survey Central City Malls, buoyantly declared, "Pedestrian malls have become an exciting part of the revitalization of downtown business districts." 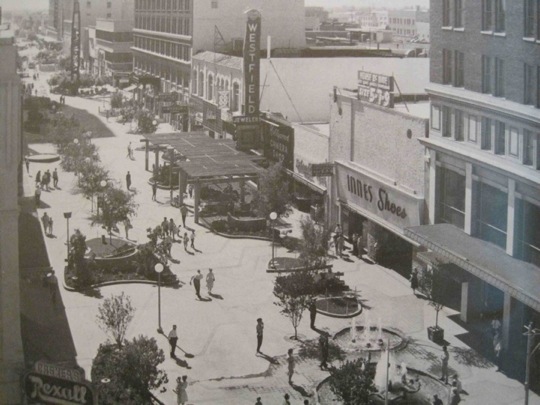 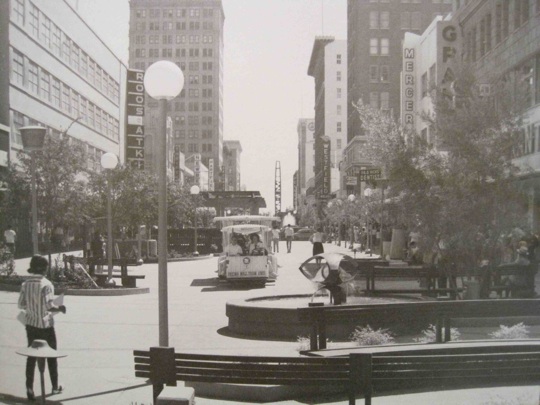 Thirty-two years later, some malls, such as that in Virginia's city of Charlottesville remain economically viable, while others in Sacramento, Minneapolis, Allentown and elsewhere have been reopened to transit or vehicular traffic. And Fresno? Well, that mall was recently determined eligible for listing on the National Register of Historic Places, but its condition is rather diminished.

So, what's going on? The mall, designed by pioneering landscape architect Garrett Eckbo unified the original architecture and planning by Victor Gruen Associates -- it was the centerpiece of Gruen's master plan... and an initial hit. Like other pedestrian malls, Fulton has seen its share of decline. Because of demographic and population shifts, the mall's only real usage is during business hours. After 5PM, it's largely dormant. This is bad for retail, revenue and city spirit.

Since the big issue is how to integrate or re-integrate this pioneering Modernist work into Fresno's broader revitalization efforts, I'm not going to fall into the trap of complaining about the poor state of Eckbo's elegantly designed benches, planters and fountains or the sorry state of the plantings (though collectively, these are important and unique, character-defining features in the overall design that should not be sacrificed). The reality is that as a designed landscape, Fulton Mall still has great bone structure, and I would suggest it's a potential National Historic Landmark. 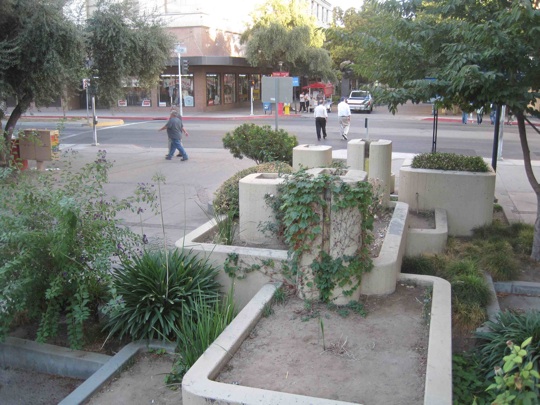 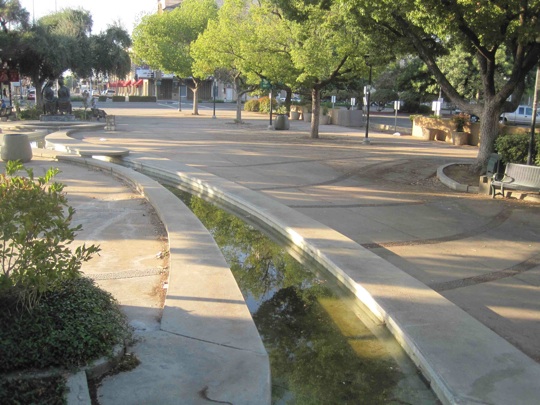 The bigger issue is how to preserve and manage a significant historic design while balancing critical economic and programmatic requirements. What's happening in Fresno is playing out elsewhere in towns and cities with modernist urban landscape architecture. The nation's rich and diverse legacy Modernist of landscape architecture is still struggling for visibility. Two of Eckbo's designs -- Ambassador College in Pasadena and the Tucson Convention Center -- are in serious trouble and may meet the wrecking ball. And, as we have all heard at one time or another, city planning and design decisions about the fate of such places are frequently made under unusual, sometimes secretive circumstances. Occasionally, the actual outcome isn't clear until the first bulldozer shows up.

Fresno's approach is different. Fresnans know the mall is important. Here's what the City's Web site has to say:

The Fulton Mall is a six-block pedestrian mall on the site of Fresno's historic "Main Street." Until this part of Fulton is brought back to life on a 24-hour basis, Downtown Fresno will not feel fully revitalized. That's why the Mall is the focus for all of the City's downtown revitalization efforts.

And, here's what the City is doing: A guide to downtown development and investment in infrastructure, the Fulton Corridor Specific Plan, was commissioned and a 21-stakeholder committee has been appointed to make recommendations to Mayor Ashley Swearengin and the City Council on alternative designs for the Fulton Mall and other Plan contents.

On September 27 I had the good fortune to participate in a presentation of eight preliminary alternatives to a packed room of local citizens and stakeholders. Mayor Swearengin provided a spirited opening to the proceedings. She noted that unlike previous attempts at revitalizing the mall that had thwarted Fresnans, this time was different: "There is something powerful going on here," she declared to a boisterous crowd. "We are going to be moving mountains as a community. This is monumental."

The alternative designs generated by the consulting team led by architect and urbanist Stefanos Polyzoides ranged from "do nothing" to "restoration" or "opening the street to vehicles" with variations on these themes. Foundational to this planning process was a mission statement crafted by the community, which notes that "Fulton will be a destination for the region due to the vibrancy and vitality that exists. At the core, Fulton is built upon commerce, community, culture and connectedness and uses the values of the past in a manner that authentically resonates with the opportunities of the future."

Today, one month before the 100-year anniversary of Eckbo's birth, it seems fitting that a vibrant community-based exercise regarding the future of this nationally significant Modernist landscape is underway. Eckbo would have embraced such a public process, as part of a plea for well-organized and well-planned landscapes, from garden to nature, stressing our relationship with the land without apologizing for the human presence.

The City of Fresno is to be commended for making the public process extremely transparent through their Web site, which contains critical links to videos of public presentations, the alternative design proposals, and links to everything from the history of the public art along the mall to a chronology of letters regarding the recent National Register designation.

In addition, the process that the city is promoting, under Polyzoides' leadership, has brought together a variety of experts in transportation, economics and historic preservation who often have different but overlapping perspectives. Personally, this has been an exciting process where all participants have been asked to move outside of their comfort zone.

Let's hear from you.