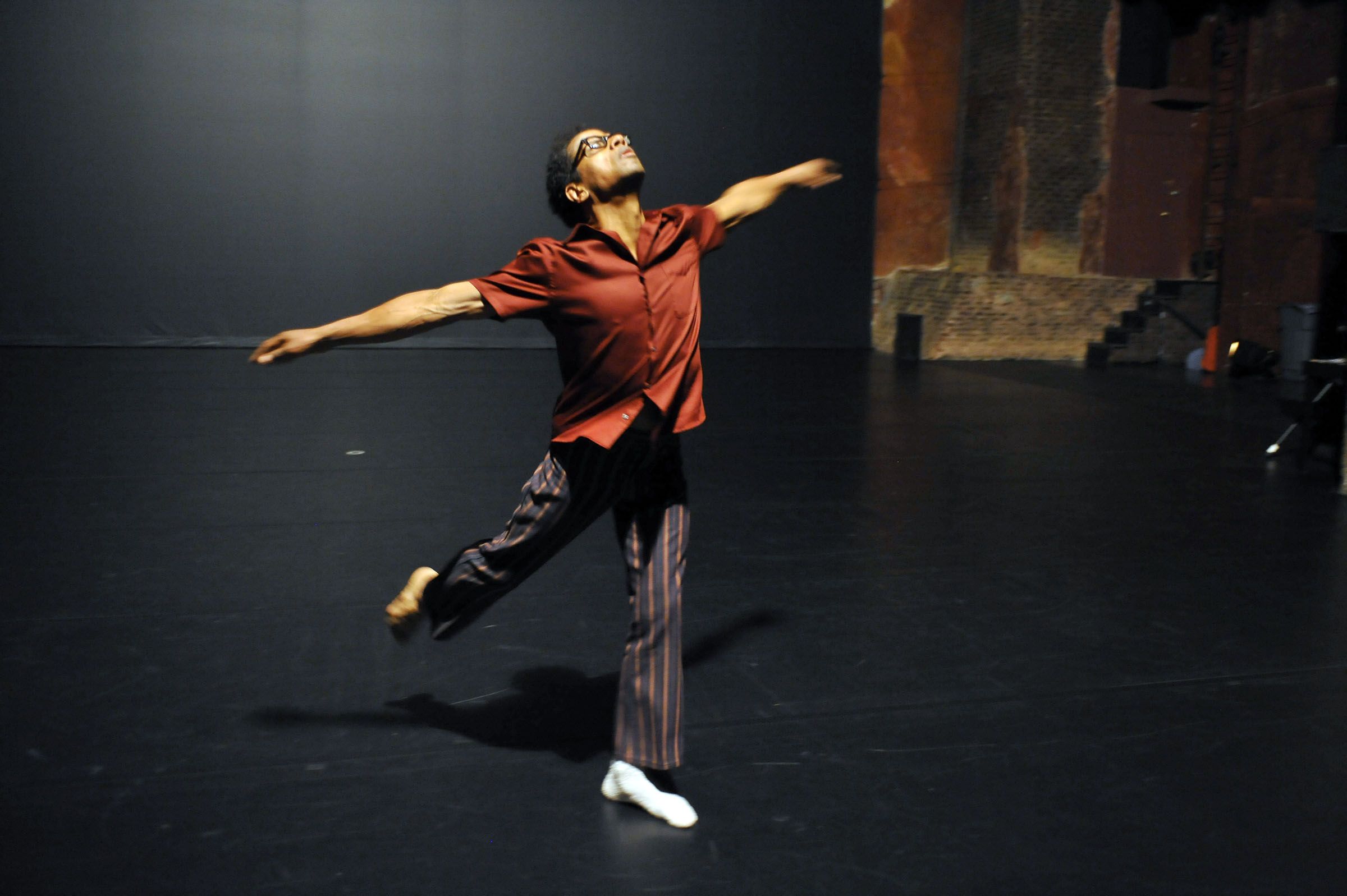 In a final public adieu to postmodernism, Ralph Lemon transported himself into a multimedia star of a new constellation with his national tour of How Can You Stay in the House All Day and Not Go Anywhere? 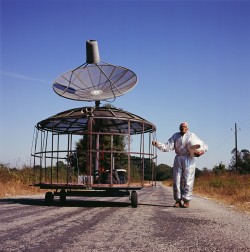 Weaving a rich and complex imagery into dance at its most fiercely compelling evocation of the Now, a four-chapter multi-level Ouroboroic narrative -- incorporating art installation, film, video, monologue and live performance -- employed one of the deceased movement's cynical strategies, appropriation, and raised it to homage, replete with universal meaning. 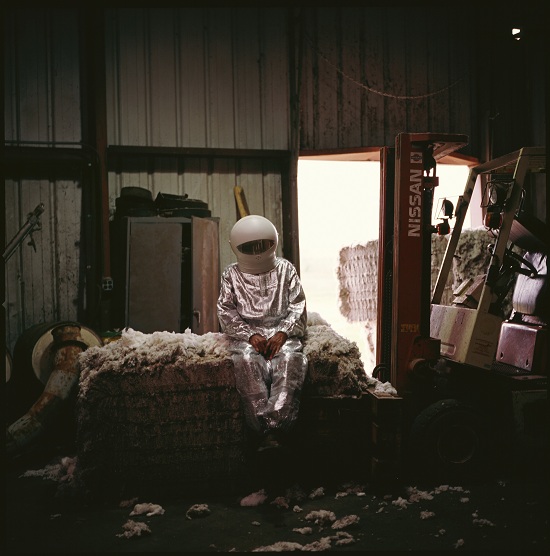 In doing so, the cross-disciplinary innovator straddled the tension of the opposites existing between the breakdown of one epoch and the ascending of the New, a middle passage forming the hieros gamos or sacred marriage of opposites. The holistic archetypal configuration was beautifully integrated into a timely multilayered aesthetic uniting a personal narrative of grief over the loss of his partner to the universal experience of ego death as prerequisite for a paradigm leap into an entirely new manner of being.

We must take conscious, pre-mediated action towards our own liberation, and in doing so, accept responsibility for our destiny to live as free human beings: this is the message that Lemon filters down to the public body via Andre Tarkovsky's 1972 science fiction film Solaris, with its curving interiors prescient of a new galactic world view. The Russian avant-garde filmmaker provides the symbolic bridge to Lemon's vision of a new modernism arising through the resolution of the postmodern predicament -- Hari and Kris Kelvin, struggling for consciousness of their own projections. Lemon completes the cycle by transmitting the film's central symbol -- the sacred marriage icon in the weightless lovers -- to earth by way of a strangely beautiful video of Walter Carter (Lemon's 102-year-old collaborator, a former sharecropper from the Mississippi Delta) surrendering to the deathlike embrace of spiritual union with his wife, Edna. 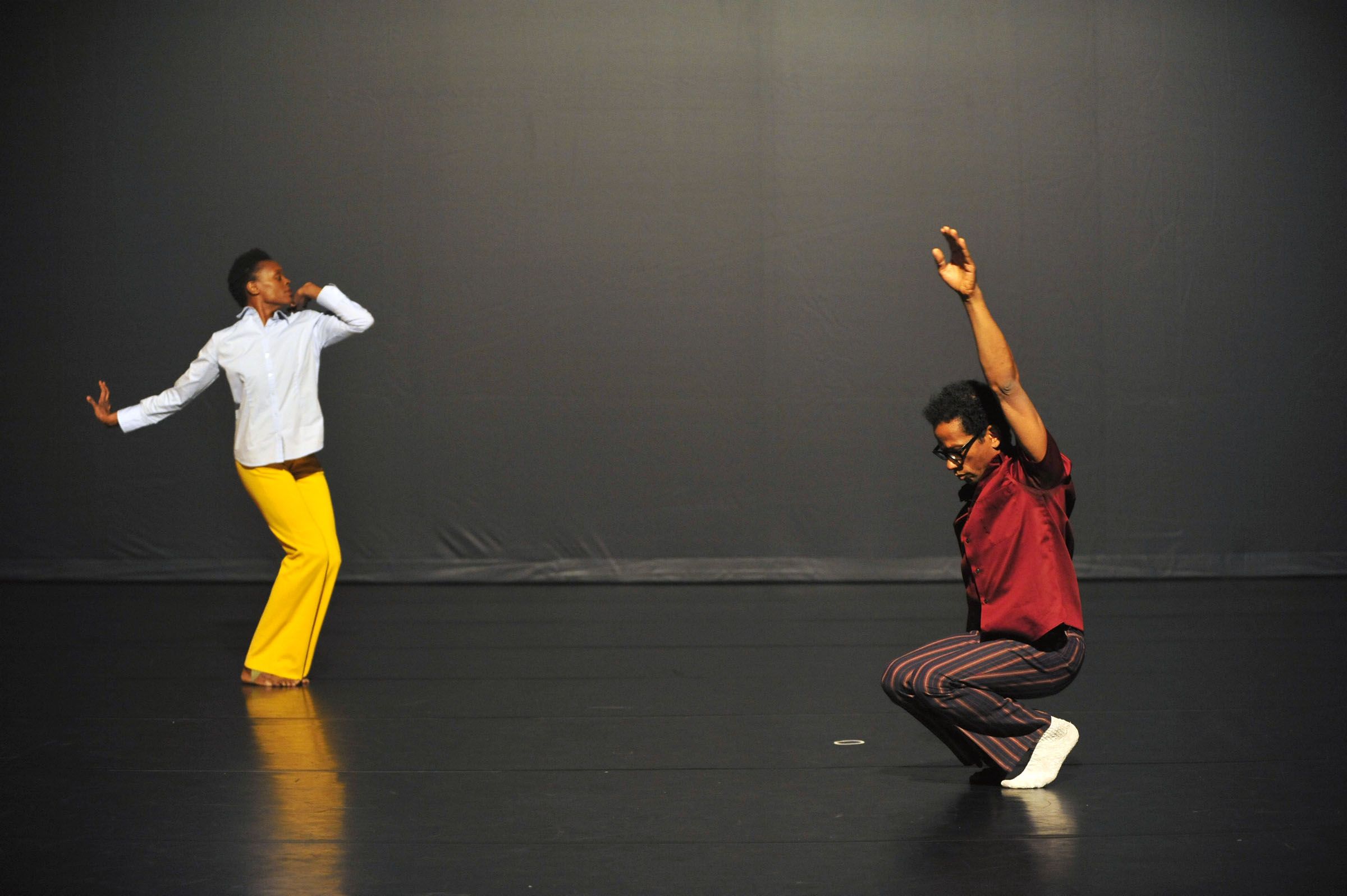 The visceral power of a dynamic movement consciously connecting opposites also takes place on stage, between Lemon and the amazing Okwui Okpowasili (above), a strong, electrically charged female (in the literal meaning of embracing her inner male), via a video of a previous performance. In another projection, a stream of consciousness monologue provides a transparency into a process in which the choreographer wears down his dancers during a taped rehearsal in an Abramovic push for transcendence through duration -- and ultimately exhaustion.

These disparate chapters gracefully fuse into a metaphor for a dying epoch: willful movement until a surrender in which the body, with its innate intelligence, takes over. This return to chaos is the middle passage between the opposites where the archetype of holism emerges from the descent to the abyss (chaos in its original meaning) a wailing woman off-stage. This primordial figure is the collective shadow of our own ego's repressed grief in our struggle to embody an intuitive manner of being. 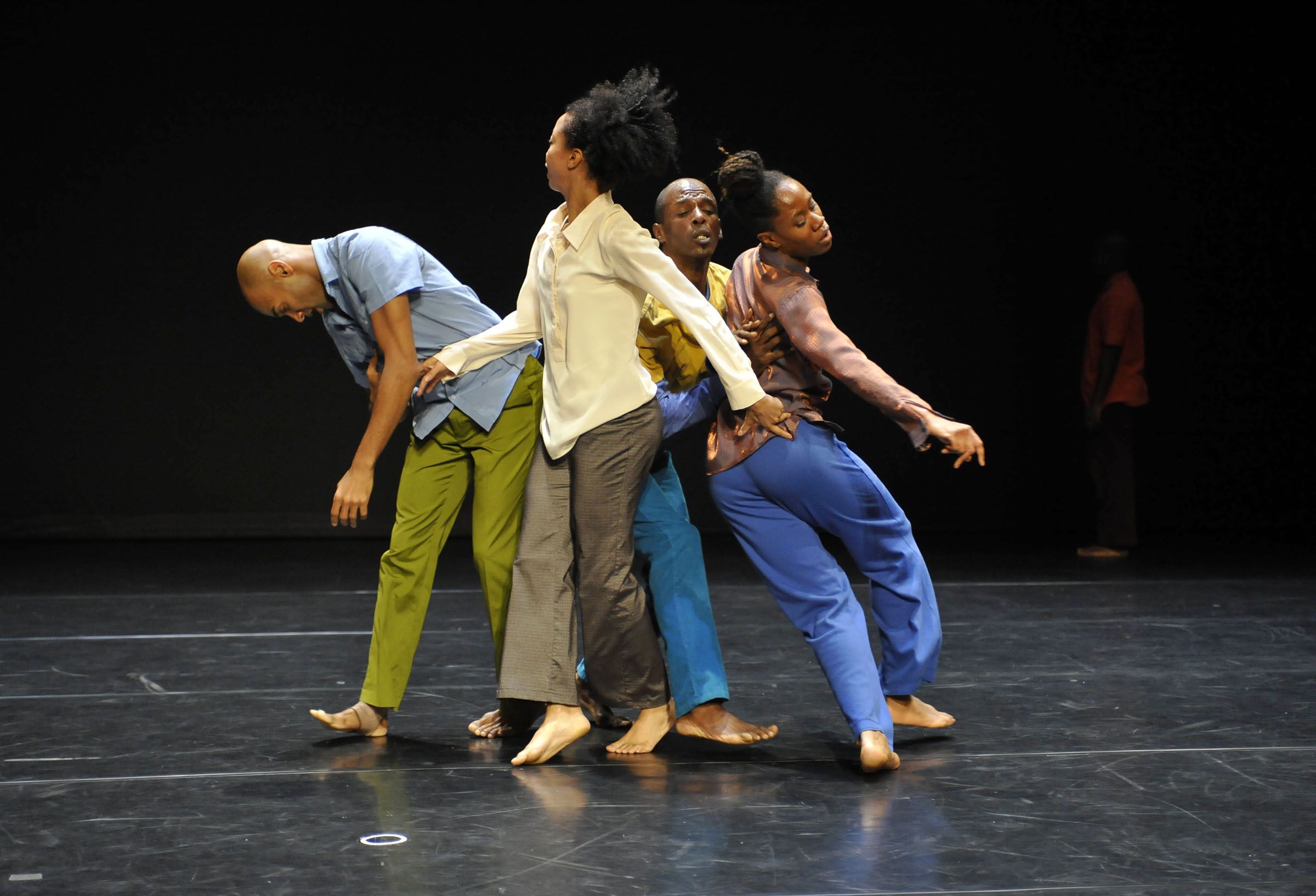 The paradigm leap to a new state of holism is a constant eternal aliveness sought by the centenarian Carter. As a stand-in for the public during our present time of transition -- this "everyman" rooted to the American soil is more in touch with an emerging archetype than the artists and academics whose function it is to deliver us into new modes of relationship with ourselves and our culture. Lemon truly gets this, and his transparent embrace of the Heisenberg uncertainty principle is a leap in consciousness reflected in his video voiceover relating how he, as director, got out of the way to allow for the alchemical marriage, or conjunctio, to enter his creation through the numinous.

The reward for making this bridge -- between the avant-garde and a public body better positioned, Jung warned, to embody a 21st century icon than the intellectual elite who impede the process through the mind -- is a new holistic language for dance. Lemon's interpretation of Euclidean forms arising through the chaos of breakdown injects into dance the ancient understanding of patterns determined by the universal qualities of number, geometry and rotation.

This intuitive participatory experience was brought into a close through the fine point of Meditation on the stage of the darkened theater at The Kitchen on the final day of the New York performance at BAM. The light and sound installation consisted of either a straight line or a right angle across the stage and up the back wall; which view depended on whether you brought a linear (duality) or holistic (multidimensional) perspective to the experience of the work. It slightly moved, challenging your focus. The "dark energy" divided by a line created a duality representative of the brain; conscious (left brain) and unconscious (right brain) integrated at the back of the head where symbols connect with the numinous, realizing the holism of outer and inner.

By moving our mind/body experience into this center, and therefore a new dimension, a triangle is completed by our now holistic line of vision. Audience participation in this making of a sacred geometry takes the perception away from the external projection -- and Lemon's personal journey -- into the internal space of reflection. Here we are invited to connect our own experience with the universal. This is surely an act of grace, for a performing artist to remove himself from the viewer's line of perception so they may incorporate his symbols, however imperceptibly, for personal change.

We therefore arrive at the very essence of reflection; not simply -- as Jung said -- an act but an attitude to the paradigm leap. How many opportunities do we have, particularly in New York City -- where space is at a premium and electrons are organized via technology -- where we can stop and come to terms with what we have experienced, and absorb it into our body an act of becoming conscious? 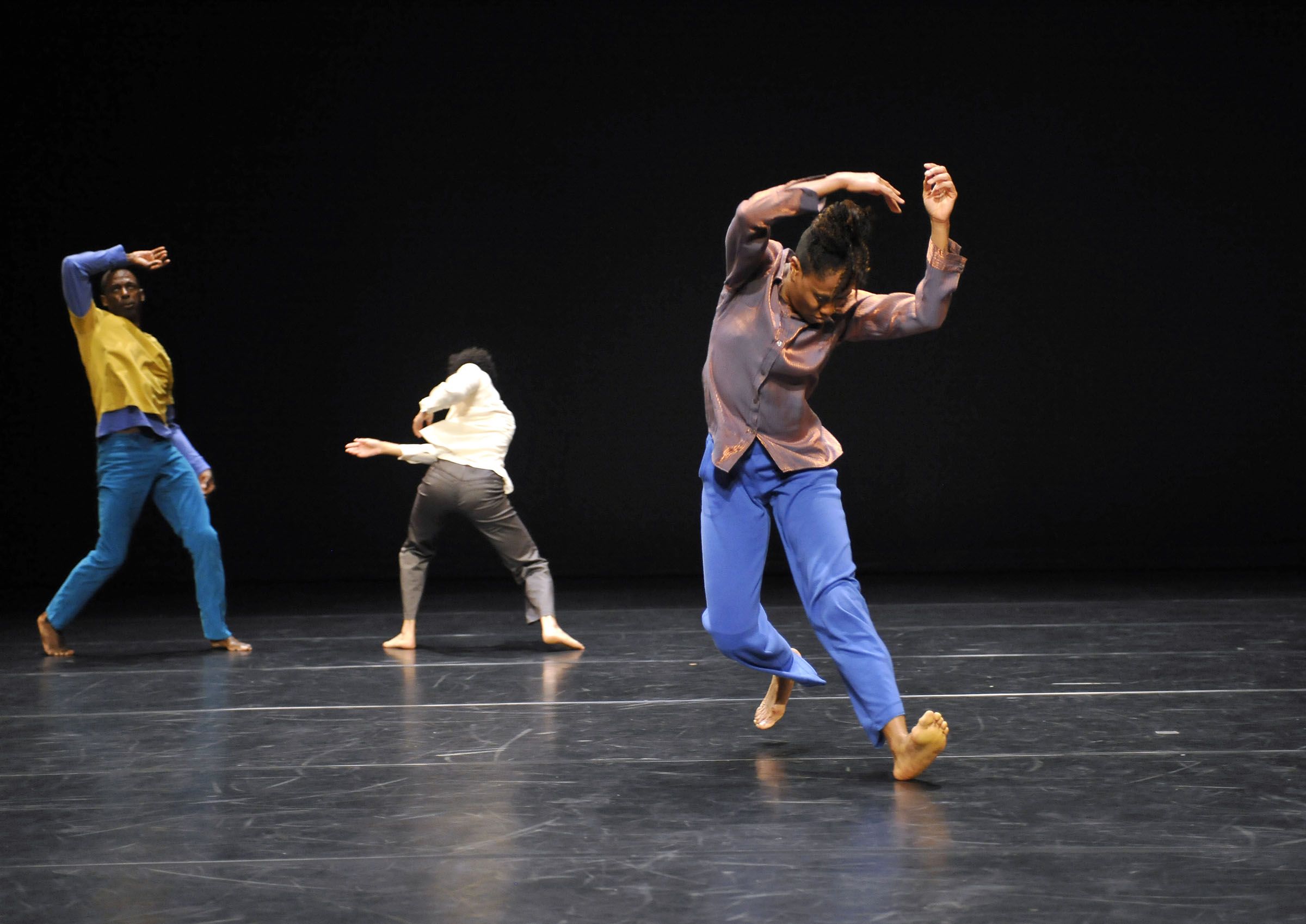 Yet, Lemon -- newly emerging from his bold middle passage as the shamanic interpreter between epochs -- demonstrates the essentiality of this marriage of inner and outer. The dynamic stillness between particle and wave is where we confront the wavicle: an awareness of the imperceptibility of the power of the symbol delivering a new aesthetic to the avant-garde. The beauty of harmonious collaboration (born out by Lemon and Walter as well as Walter and Edna) with the public body viscerally and visually freed from patriarchal imprisonment.

Lemon performed without any of the nudity that has become practically de rigueur on New York cutting edge of late, yet the choreographer was as naked as any performer can be. Who could have imagined that such an art arising from a stripped down human vulnerability -- an actual personal experience of loss -- could drive the last nail in the coffin of postmodernism? Yet, in retrospect, such an open and unsentimental quest for transcendence was absolutely essential to the middle passage. How else could we have authentically experienced the heralding of a new modernist era embracing what the former denied? Thanks to Lemon and his influence on the international avant-garde, the divine eternal feminine exiled in the western body is now taking center stage, even in her visual absence.