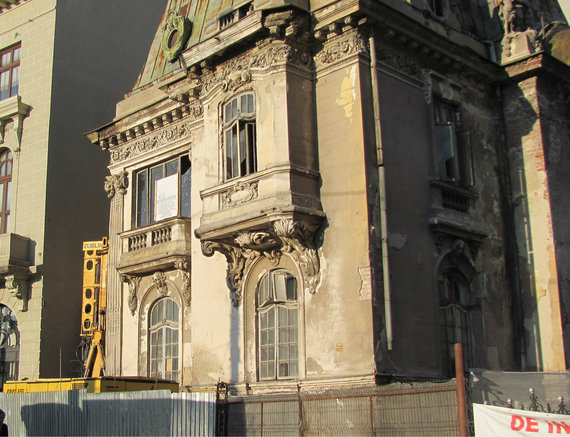 The Nanu-Muscel House is one of the solitary architectural jewels left to remind Bucharest, Romanian's capital, of its pre-communist glory. Its resemblance to the French capital allowed it to be dubbed in the inter-war period 'the little Paris.' Sitting next to the Economic Studies Academy of Bucharest in a key historic area of the city, Piata Romana, the house has been left to decay for years. After purchasing it in 2013, the Academy decided to modernize the historical building by attaching a seven-story glass construction behind it to house research offices. Imposing a modern addendum on historical buildings has become a standard practice in Bucharest, whenever the houses are considered important enough not to be simply torn down illegally or let to decay for years before capitulating to time's merciless pressure and collapsing on their own.

Two other invaluable historic buildings, the Stirbei Palace and the Oromolu Villa, are hounded by modernization initiatives. In exchange for its restoration, the Oromolu Villa has received a three-stories office building behind it, while Stirbei Palace contends to become the first palace-shopping mall in Europe. These modernization initiatives raise substantial questions regarding their legality and the collusion between real estate agents and local authorities in sealing questionable deals that are detrimental to the city's history and architectural integrity.

In the case of the Nanu-Muscel House, two Romanian civil society organizations have taken to court to contest the construction authorization issued by the Bucharest Mayor's Office for the seven-story building addendum. They argue that it represents a breech on the 422/2001 Law on the Protection of Historical Monuments, which requires a Ministry of Culture approval, since the Nanu-Muscel House has been classified as a historical building in 2013. 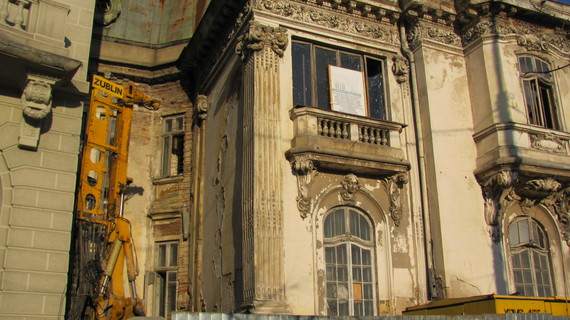 In an interview, Roxana Wring, the President of Pro.Do.Mo, one of the nonprofits, argued that the project would be toxic for the Romanian society, and that their efforts are focused on protecting the Nanu-Muscel House and the historic area, Piata Romana, in which it is located. Built in the late 19th century and combining architectural elements of the Louis XV and XVI styles, the Nanu-Muscel House belonged to a professor and his wife, who donated it in 1940 to house retired teachers and students. There were originally two buildings, but the auxiliary one has already been abusively demolished in 2007.

A press release of the Academy announced that the restored historical house would become a cultural space, which would host the Academy's Museum, the Cecilia Cutescu-Stork Gallery of Art and spaces for the cultural-artistic activities. The seven-story glass building would, in turn, be used as research and innovation laboratories and office space. Additionally, a three-level underground parking lot would be built to provide parking spaces for the university professors. The construction, started in July 2015, is set to end in 2018, a questionably long period of time for an initiative of its scale. 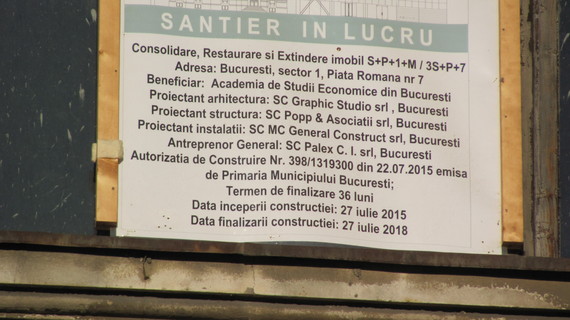 Some of the companies responsible for the construction process have been involved in highly controversial previous businesses. SC Popp & Asociatii, responsible for ensuring the structural frame of the Nanu-Muscel project, provided the same product for arguably the most notorious illegal construction in Bucharest, Cathedral Plaza. Built next to the Catholic Cathedral in the Romanian capital, Cathedral Plaza, one of the tallest buildings in the city, was found to lack the appropriate authorizations from the Mayor's office and was ordered to be demolished, by multiple courts in the country. The latest decision on the case was issued in September 2015 by the Appellate Court of Ploiesti, with the demolishing process yet to be initiated.

Similarly, SC Palex, the general entrepreneur of the Nanu-Muscel project, has been involved in deals with the First Sector Mayor's office, who was eventually suspended and is currently under investigation. The company was hired to conduct thermic rehabilitation of apartment blocks in the mayor's sector. The mayor was accused of being part of an organized criminal group, which committed acts of corruption, by favoring businesses in gaining public projects in exchange for commissions of 10 to 15 percent of the initiatives' total value. Romania's Anti-Corruption Department (DNA) confiscated and is currently analyzing the contracts signed by SC Palex with Sector One's mayor. Despite these contested affairs, in December 2015, SC Palex, in a consortium with two other agencies, was granted another rehabilitation project, worth $220 million, by the mayor of sector 3.

The Nanu-Muscel House is not the only historical building in Bucharest that could be butchered through a modern addendum. The Oromolu Villa, the only edifice in Victoria Square, which survived former Romanian dictator, Nicolae Ceausescu's questionable urbanization efforts, has almost finished being upgraded with a three-stories high glass office space appendix. The new building will be L-shaped and surround the House on two sides. Built in the Louis XVI style at the beginning of the 20th century, the Oromolu Villa was once the residence of Romanian's national governor. Its architect, Petre Antonescu, is responsible for building some of the key landmarks in Bucharest, including the Arch of Triumph, the Kretzulescu Palace and the Mayor's office.

In 2004, the property was returned to Oromolu's successors, who had already signed pre-contracts with Central AH Pioneer SRL, which became the owner in 2005. The House was mortgaged in 2005 and 2010 to obtain bank loans. The last loan was found to be particularly suspicious. Taken from Telecom & Technology BV, a Dutch company, the loan is problematic since, in the real estate register excerpt, it is featured at 10 million euros, but, according to the mortgage contract, it only appears to be 5 million. The affair was even more dubious since the owner of Central AH Pionner, Central and Eastern European Investment Fund Limited (CEERES), until recently had the same address as the firm from which it took out the loan. According to the National Journal, this latter company is much smaller than the borrowing one and wouldn't have the financial capacity to provide this sum of money. 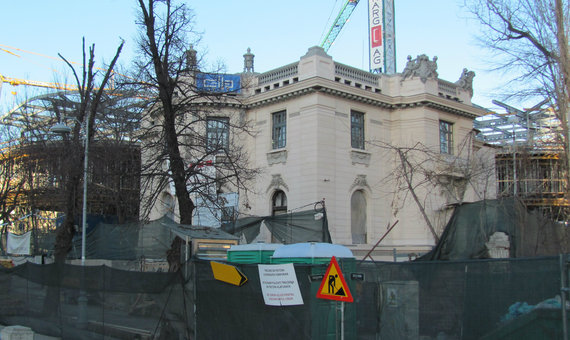 In 2011, the Villa entered the property of New Europe Property Investment (NEPI), a South African company, which is currently one of the biggest real estate investors in Romania. NEPI received the Villa as part of a concession from Avrig 35, a key real estate company in Romania. Despite the fact that Villa Oromolu is in an invaluable area of Bucharest, situated right next to the Romanian Government's building, NEPI has, however, argued that it didn't want the building. It considered the project that it is has almost completely as untenable and more as a prestige endeavor to demonstrate its commitment to Bucharest's history, more than anything else. There are also considerable questions regarding the beneficiary of this project, a company called 'Victoriei Office Building" SRL, which although having fixed assets of around 12-13 million euros, currently has no employees. Despite these important questions that seem to have surrounded the project since its onset, it is almost finished with the office building to be leased starting this summer.

Substantially less smooth has been the decision to construct a mall addendum intended for the Stirbei Palace, a key historical monument in Bucharest. The project plans to add a central seven-story high complex behind the Palace with additional three stories on each of its sides. Apart from commercial space, it would also include offices and apartments. The addendum's architect is Vlad Arsene, who also planned the aforementioned highly controversial Cathedral Plaza. As the Palace is situated in a highly protected area, urbanization regulations specify that a new construction cannot be taller by more than three meters than the one next to it. This standard would be breeched in the Stirbei Palace's case. The Palace is 17 meters, while the addendum would be between 34 and 40 meters, practically twice its height.

DNA has opened an investigation regarding the manner in which the project's construction authorizations were issued, with multiple representatives from the Ministry of Culture and Sector 1 being targeted. The Palace once belonged to one of the wealthiest families in Romania's history, the Stirbei, and was famed for hosting the most spectacular balls in the late 19th and early 20th centuries. After being nationalized by Romania's communist regime in 1948, the Palace served over the years as the headquarters for several museums, including the Museum of Ceramics and Glass. It was purchased in 2005, by Ovidiu Popescu, the owner of Petrolexportimport SA, a company engaged in the wholesale of petroleum products, for around $12 million, after the property had been restituted to its legal owners. After his passing in 2011, the property was inherited by his son, Alexandru Popescu, who remained committed to fulfilling his father's vision.

DNA is also investigating the legality of declassifying and demolishing several of the Palace's annexes, some with an invaluable historical worth. In 2007, the Palace's additional buildings, a smaller guest house, an inn with a cellar containing tremendously valuable old wines, as well as a semicircular stable, architecturally unique in Bucharest, were all demolished in the span of two days. The newly freed terrain was intended to become the land upon which the current project would be built. 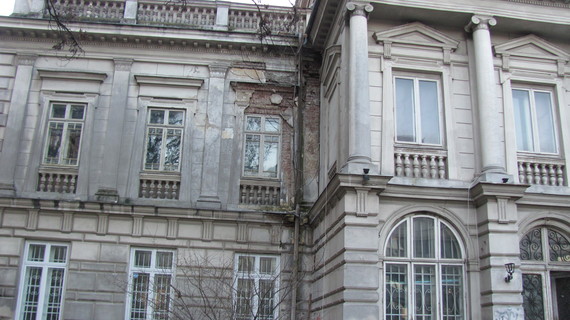 Aside from DNA's investigations, the Romanian public and civil society have also amply opposed the Stirbei project. Two nonprofits organized discussions with local residents, who would be directly affected by the construction. These organizations have argued that the addendum would ignore parking regulations and would significantly burden the traffic in the already crowded area. At the same time, a petition opposing the project, addressed to the General Council, was signed by over 800 individuals. Through the petition, people are requesting that the local authorities prioritize their rights and interests, when considering this and similar projects.

While promoters have hailed the project as a great opportunity to restore the Palace to its former beauty, commitment to the Palace's rehabilitation seems facetious, as no measures have yet been taken to salvage the building, which has over time sustained substantial damage and desperately needs intervention.

The three aforementioned buildings are only a few of the many historical buildings in the Romanian capital threatened by modernization projects, which hide larger political and economic interests behind the false pretense of restoration. The dangers faced by the architectural jewels in Bucharest have become internationally notorious. In 2016, the city was included on the World Monuments Watch list, which highlights '50 sites in 36 countries that are at risk from forces of nature and the impact of social, political, and economic change." For Bucharest, the organization emphasized the city's unique urban fabric, combining a multiplicity of architectural styles, which are threatened by "abandonment, demolition of historical building, uncontrolled development, and inappropriate rehabilitation." World Monuments Watch has included Bucharest on its list to create public pressure to change this dramatic situation, by establishing a moratorium on demolitions as well as ensuring more public consultation and transparency, when making architectural decisions, which has an impact not just for Romanian heritage, but for global heritage as well.