When Indian Prime Minister Narendra Modi comes to the U.S. in a couple days, he won't just make the obligatory stops at the White House and the United Nations. The most important destination on his itinerary is his visit to Facebook Headquarters, out in Silicon Valley.

There has long been a strong co-dependency between Indian immigrant entrepreneurs and engineers and Silicon Valley; and, increasingly, between Silicon Valley's global growth prospects and the massive Indian market. It's no wonder Mark Zuckerberg is rolling out the red carpet for the Indian head of state.

An intriguing question is what Modi hopes to get out of the visit, and a one-word answer comes to mind: talent. We're all familiar with the big wave of engineers and information technology graduates that flowed from India to the U.S. over the past few decades and its role in the Silicon Valley boom. The U.S. tech sector's related outsourcing trend conversely created many IT-related jobs in India, transforming the economies of cities such as Bengaluru, Chennai, Hyderabad and Pune. But to date, the bulk of that activity has been focused on satisfying the demand for products and services in America and other developed economies, thus limiting its impact within India.

Now the time is ripe for a second wave, a wave in the opposite direction. This time, the demand for innovation and technology products is in India, and the top talent needed to make it happen is in Silicon Valley and other American tech hubs.

Modi, and India more broadly, should invite some of the country's impressive diaspora to go home.

Modi has announced a "Digital India" initiative that follows a previously launched ambitious nationwide biometric identification project, alongside a plan to create 100 "Smart Cities." The Digital India plan aims to dramatically increase Internet access for a billion people in India; currently only 40 percent of the population has some basic online access, and only 10 percent have access at decent speeds. But the potential is enormous because the penetration of cell phones in India is now quite high, with prices of smartphones dropping to less than $20. Meanwhile, Zuckerberg and Facebook are backing Internet.org's goal of connecting everyone in the world to the Internet, a goal that is starting to seem achievable in the not-too-distant future.

Zuckerberg met Modi in New Delhi earlier this summer and the two heads of state --if we can call Facebook a "state" -- share a passion for democratizing access to information. Modi's Digital India initiative has the potential of revolutionizing how India's notoriously inefficient government services are provided and of bringing financial services to people once excluded from the traditional banking sector.

So there is understandable excitement around Modi's ambitions and the bold plans he has announced since taking office nearly a year ago. This has energized many Indians, including many who left the country many years ago to come to the U.S. and other developed countries seeking fortunes, better living conditions and appreciation for their talent and skills.

I myself came to the U.S. from Rajasthan in India more than 30 years ago as a graduate student, accepted a job as an assistant professor at UCLA Anderson School and became a naturalized U.S. citizen 15 years ago. But I have continued to go back to India every year to teach, do research and participate in social initiatives in India. However, I, and many others like me, also have a fair amount of skepticism about whether Modi will be able to follow through on his vision and create the right conditions to give it a chance to succeed.

Getting things done in India, after all, requires far more than grand ideas and capital. The British, before they left their prized colony, established a civil administrative service now known as the IAS (Indian Administrative Service) -- the bureaucracy that makes things run and implements plans. The IAS personnel are chosen through a highly selective process and are very bright and ambitious technocrats. But they are also very poorly paid. They are the gatekeepers that monitor and control access to the ministers and the politicians. In any large bureaucracy, controlling such access is a source of power.

And power in the hands of poorly compensated, but highly talented, people invites corruption and inefficiency. For example, when I have tried to approach ministers with some reasonable ideas on how we can use technology for financial inclusion and women safety, the ministers have received them with enthusiasm, but the gatekeepers' follow-up responses have varied from a lack of urgency to utter indifference.

It is no surprise that India ranks 142 out of 189 in the "ease of doing business" ranking complied and published by the World Bank. Though Modi has promised that he will work on improving this ranking, it is not clear what he has done or can do to diminish the bureaucratic gridlock that often confronts those wanting to do business in India as well as those who want to implement innovative social initiatives that can improve welfare across the country.

In addition to India's notorious IAS-inspired red tape, excessive nationalism is another stumbling block standing in the way of the nation's development. While the U.S. (and its tech sector) is a prime example of a nation that benefits from importing talent and ideas from elsewhere, unfortunately, India's political culture resists even the re-importation of successful entrepreneurs of Indian heritage.

The brain drain from India to the U.S. over many decades now has the potential to turn into a brain gain for India.

Modi needs to encourage talented Indians to come home and in some cases, to join the government but there are many vested interests who oppose the appointment of such people, arguing that anyone holding a position of power must be a citizen of India. And this becomes a circular argument (such are the ways of bureaucratic nonsense) because India does not allow dual citizenship, so many talented people of Indian origin worth attracting in this country are naturalized U.S. citizens who've since had to renounce their Indian citizenship. Sam Pitroda, a telecom visionary and entrepreneur who was invited by Prime Minister Rajiv Gandhi in the late 1980s to reform the antiquated telecom industry, had to renounce his U.S. citizenship to be given an important role in the government.

Political interests in India tend to be rather parochial. The governor of the Reserve Bank of India, Raghuram Rajan, is universally regarded as one of the most talented central bankers in the world, yet he faces a constant threat of removal, or non-renewal to the position, by narrow-minded political interests in Modi's party, BJP, who resent his resolute independence and view him as an outsider. This despite the fact that Rajan, who was appointed by the previous prime minister from another party, did maintain his Indian citizenship when he lived in the U.S. as a renowned academic at the University of Chicago for many years. So far, Modi deserves credit for holding onto Rajan in the face of tremendous pressure to make a change.

Modi, and India more broadly, should invite some of the country's impressive diaspora to go home. With economic incentives, political license and the freedom to implement ideas, their investments would help more than a billion people. The brain drain from India to the U.S. over many decades now has the potential to turn into a brain gain for India.

PHOTO GALLERY
All That Modi Wore During Obama's Visit To India
Download
Calling all HuffPost superfans!
Sign up for membership to become a founding member and help shape HuffPost's next chapter
Join HuffPost 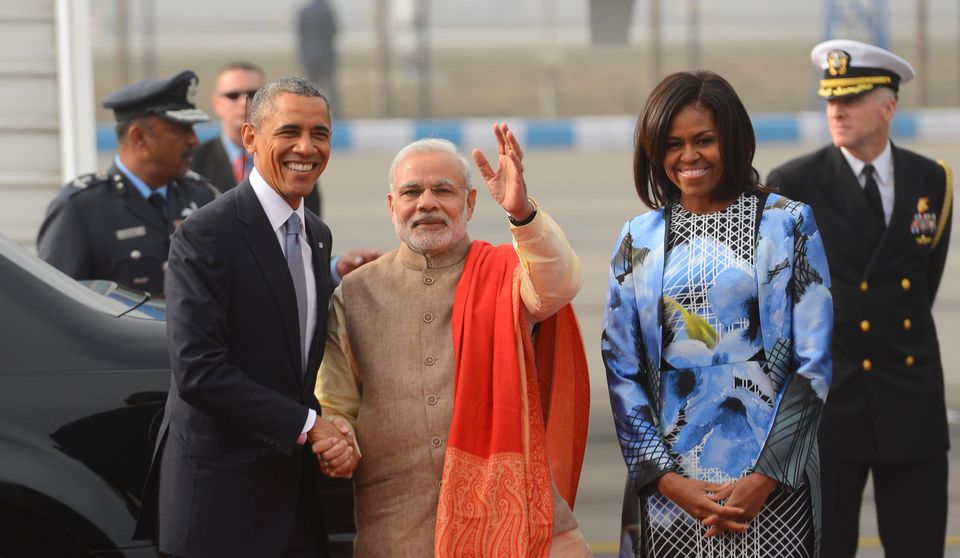 1 / 9
Breaking from protocol, Narendra Modi greeted U.S. President Barack Obama at the Palam Air Force Station on Sunday morning. Dressed in beige with a light brown Nehru jacket, Modi wore a bright orange shawl which is both the signature BJP colour, as well as a flash of warm colour in the cold winter morning. In this picture, he is seen in the center with Obama on his left, as first lady Michelle Obama stands beside them, on Jan. 25, 2015. Obama's arrival Sunday morning in the bustling capital of New Delhi marked the first time an American leader has visited India twice during his presidency. Obama is also the first to be invited to attend India's Republic Day festivities, which commence Monday and mark the anniversary of the enactment of the country's democratic constitution.
AP Photo